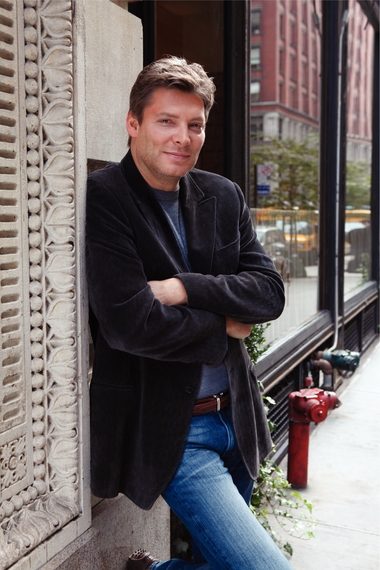 Andrew Gross is the best-selling author of twelve thrillers, five of which were written with James Patterson. His novels have been translated into more than twenty-five languages. His recent thrillers, No Way Back, 15 Seconds and Eyes Wide Open will be joined on April 22nd by his new novel Everything to Lose. This deeply imagined pot-boiler takes the reader on a pulse-pounding chase through current events and deadly circumstances from twenty years earlier.

Everything to Lose begins with the line, "Every life is the story of a single mistake, and then what happens after." Tell us why you began the novel this way.
I think this is a compelling theme, not only for mystery and thriller writers, but about life in general. When you look at your own life, you can see how much was actually quite random and could never have been predicted. Many things happen in our lives -- good and bad -- arising from events that were completely beyond our control. It's a way of looking at life: there can be moments in time upon which life hinges. For many people, unforeseen -- and sometimes, drastic consequences --spring from a single, life-altering bad decision. And that's what happens in Everything to Lose -- at the beginning of the story, the protagonist makes a mistake leading to a series of unforeseen events.

And that certainly can be the nidus for a thriller.
That's exactly what we thriller writers do. If you look at all my books, a character makes a mistake which leads to a series of drastic consequences. In my earlier novel, No Way Back, Wendy Gould, a reasonably happy and well-adjusted woman, impulsively goes with a stranger to his hotel room after she's had an argument with her husband. That turns out to be a profound mistake and things fly wildly out of control. Even though most of these are forgivable moments in life, they unleash a torrent of consequences. Many of my books use that theme. With Everything to Lose, I started the book with that quote.

Tell us a bit about Hilary Cantor, the protagonist of Everything to Lose, her single mistake, and the predicament she then faces.
Hilary Cantor is a smart, successful, divorced woman. She has a rewarding job and she's good at it. She's a quality person, and a dedicated mother to a son challenged with Asperger's. She's devoted herself to him and does her best to enable him to become all he can be. But it seems events conspire against her and her life goes into freefall. The division she worked is shut down; her ex-husband (now remarried) walks away from any responsibility to their child; she's under enormous financial pressure; and finds herself in a very disadvantaged moment. She's not sure where to turn.

She's driving down a road at night and comes upon an accident. She tries to do the right thing by scampering down a gully to save the driver who has plummeted over the road's edge. As the car appears to be ready to go up in flames, she discovers the driver is very likely dead. No one else is nearby; there are no witnesses. On the car's front seat, she finds a satchel filled with half a million dollars. This money appears to be the answer to all her prayers, basically for her son. She makes the mistake of taking the money. Of course, there would be no thriller if she didn't take the money, or if a flood of consequences didn't flow from her action. But hopefully, we forgive her since her motives were those of a desperate mother and not of a greedy person.

She was faced with this temptation and also experienced pangs of conscience, so there's a conflict opening a window into the unknown. Tell us a bit about the role of conflict in your novels.

I think every good novel involves conflict -- both internal as in the case of Hilary Cantor who is conflicted about taking the money -- and external involving other characters and the plot developments that ensue. Hilary is in conflict, even though she's not taking the money to satisfy her own needs: she's not about to go to the Greek Islands for a pleasure trip or to use the money for self-aggrandizement.

She takes the money to help her disadvantaged son. The external conflict involves what happens after she's made off with the money. What was so much cash doing in that car? Who else wants that money? Who and what are behind the fact that the cash is in that car? And what will happen after Hilary has taken it? It's a conflict-ridden situation -- internally for Hilary, and from without. That's the essence of thrillers and really, of all storytelling. Without conflict, there's very little story to tell.

In the Acknowledgements you refer to various sources that helped you conceive this novel. Tell us about them.
I'm a firm believer in constructing a story by triangulating things or events. In Everything to Lose, I brought together three events that while separate in time and place, all came together to help form the story.

First was the element of a doomed relationship I'd read about many years earlier. A young man had murdered his girlfriend. It happened on Staten Island, NY, and seemed a mindless crime. No one really understood why it occurred. But that event stuck with me and became part of this novel. The murder itself resonates in the mind of one of the novel's characters and eventually plays a part in what happens to Hilary and those around her.

Second, I read an article in the New York Times about CU kids (callous and unemotional); these kids are deemed to possess characteristics that form the foundation for people who become true psychopaths later in life. That too, became part of the novel.

And third, was the catastrophic event of Hurricane Sandy, which affected the greater New York area and Staten Island in particular, where part of the story takes place. In the novel, I focus on Hurricane Sandy to the extent whereby the storm almost became a character.

So, I brought these three elements together, and in so doing, had the basics for a plotline. Those points required refinement and even re-formulation. But, by triangulating these events, they merged into the basic plotline of a story.

You dedicated the novel to the memory of Michael Palmer who often used the term McGuffin when describing how to construct a thriller. Talk about McGuffins and how you use them?
Yes, I dedicated the novel to Michael Palmer, a great friend, fine thriller writer, and fine human being. His concept of creating a thriller was to create a story whose essentials could be told in a thirty second summary. Some people call it an elevator speech: you know, if you're in an elevator going to the 20th floor and you're asked to summarize your novel in the time it takes to get there, then you have that 30 second summation.

I believe the term McGuffin was popularized by Alfred Hitchcock. It's difficult to define accurately, but a McGuffin is really the lynchpin of a plot -- whether it's for a novel or a movie. It's the driving force that provides a story's momentum. In the case of Everything to Lose, it's the stolen satchel of cash. Probably every thriller novel has a McGuffin -- something driving the plot and giving it a narrative arc. Of course, a novel is an organic thing. It grows and morphs as it's being written. It expands and can take different directions. Hopefully, the final product provides a much richer experience for the reader than could a thirty second summary, or a McGuffin. After all, there's character and description and the flow of prose. So a novel is far more than simply a plotline, but a compelling McGuffin can help fashion a thrilling story.

Do you search actively for ideas for your thrillers?
Yes. I'm constantly on the lookout for new hooks and plot sequences. I think many, if not most, writers do it. But an idea must be compelling to me, and must be something with substance. After all, I have to live with a novel for a full year -- being interviewed, making appearances -- and if it doesn't excite me or stoke my imagination, I can't feel good about it.

Some writers won't read another author while writing a novel. They fear they may be influenced. Do you read other thriller writers when writing one of your novels?
I've never subscribed to the line of thinking that somehow my own style or voice will be polluted by reading someone else's work. If you know your own voice, you won't fall prey to that sort of thing. In fact, I feel quite the opposite about it. I can actually read someone else's work and find inspiration in what I'm reading. Reading another writer can improve my own work. It may even solve a problem I'm having with a plotline or a character. It may even improve my style. But truthfully, after a full day of writing, I'm quite tired, and I find it easier to watch TV or some sports than to sit down and read a novel.

There was one time when I felt I was being influenced by another writer's style. I had just read All the King's Men by Robert Penn Warren, and I was so taken with his prose I tried to emulate it. But aside from that one instance, it's never been a problem for me.

What's next for Andrew Gross?
Actually, readers have been asking for another Ty Hauck novel, so I'm bringing him back. After that, I'm going to write one, or perhaps two, historical novels. I've always been fascinated by novels taking place in times other than our own.

Congratulations on writing a blistering thriller in Everything to Lose. It's available everywhere beginning April 22nd.