By Kristen Domonell for Life by Daily Burn 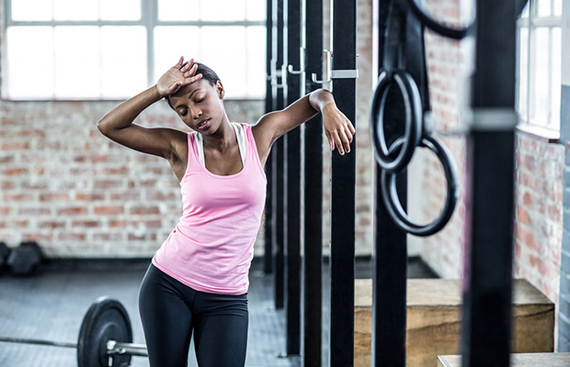 Cramping, moodiness and bloating: When it's that time of the month, you'd probably rather do anything but move from the couch and schlep to the gym. But from soothing PMS symptoms to relieving menstrual pain and giving your body a much needed boost, exercise is one of the best things you can do for your body during your period and in the days leading up to it.

If you're normally a cranky, moody mess leading up to your period, hitting the gym even just a few times a week might help. In one 2013 study, 40 young women who weren't regular exercisers before the study and had been diagnosed with PMS were split into two groups. Half completed 60 minutes of aerobic exercise three times a week for eight weeks, while the other half kept to their normal sedentary routines. After four weeks, about 30 percent of both the physical and psychological symptoms of PMS were reduced in the newbie exercisers. And by the end of the eight weeks, moodiness and bloating significantly decreased for these women.

This is probably because exercise triggers a release of feel-good endorphins, which helps with mood-related period issues, says Mary Jane Minkin, MD, clinical professor of obstetrics and gynecology at the Yale School of Medicine. And the good news is you don't have to be in all-out beast mode during a workout to feel better.

"You don't have to have unrealistic expectations, you can only do what you can do," Minkin says. "But if you can make yourself do something you're probably going to feel better."

Hormones and Your Cycle

Not only can exercise have an impact on cycle symptoms, but the ebbs and flows of your hormones during a given month can change your workouts, too.

During the middle of your cycle when ovulation occurs, your testosterone levels peak, explains Minkin. Biologically speaking, your body releases more testosterone during this time to boost your sex drive and increase your odds of reproducing. While this means you should take extra care to use protection, it also means this could be the best time to schedule in tough workouts.

"Some people might have a little surge of energy," says Minkin. "If you do, take advantage of it." Now's the time to test your limits or get working toward that bigger fitness goal.

On the flip side, after ovulation, your body starts to release more progesterone (the hormone that preps your uterus for a potential baby). If you are affected by PMS, you may start retaining fluid and feeling heavy, bloated and lazy, says Minkin. Note: If you're on hormonal birth control, you won't have these hormonal fluctuations throughout the month, Minkin says.

Natural Remedies to Help You Beat the Bloat

Think this all sounds great but there's no way you're prying yourself away from Netflix and that pint of Ben and Jerry's? Before you give up on being active, you might want to try these expert-approved remedies. Of course, every body is different (and always check with your doctor first), but if you manage to find some relief, go ahead and sign up for that spin class!

Vitamin B6: For patients with PMS, Minkin recommends taking 100 to 200 milligrams of vitamin B6 a day. It has natural diuretic properties, so it can help alleviate bloating, she says. It's also been found to reduce cyclical breast pain some women experience, which could make you more comfortable when you're working out, explains Minkin.

Vitamin E: Research shows that vitamin E may also help relieve breast soreness. Minkin recommends taking 200 units every day for best results. Foods such as sunflower seeds, almonds and spinach are all good sources of vitamin E, but they don't deliver as significant an amount as you'll find in supplements.

Evening Primrose Oil: While the scientific evidence for most natural remedies is spotty (no pun intended), there is anecdotal evidence suggesting that taking about 1,000 units of evening primrose oil a day can help relieve breast tenderness, says Minkin. Never heard of the stuff? It's extracted from the evening primrose plant and can be found at natural foods stores or most shops with a vitamin and supplement aisle.

Giving in to your chocolate and potato chip cravings during that time of the month might seem appealing, but pumping your body with extra salt and sugar will only make you feel worse. Some exercise is definitely better than no exercise when it comes to beating the bloat and boosting your mood. Your body (and everyone you cross paths with!) will thank you.