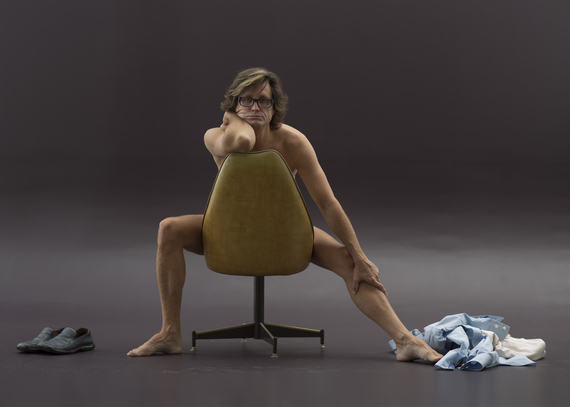 White will head to the kitchen himself on the first episode of Mark Burnett's revolutionary new cooking competition show for TNT, On the Menu. Hosted by Ty Pennington and legendary chef Emeril Lagasse, the series debuts this Friday, October 3rd at 8 pm ET/7 pm CT.

In addition to taping a reality series, White recently completed his first book, a memoir entitled The Pink Marine. A few days ago I chatted with this bi-coastal, polo-playing, sixth-generation Texan with a voracious appetite for life.

Stroud: That photo of you naked, seated in a chair. Is it some hidden clue about your personality?

White: I was totally, nakedly honest in my memoir. I joined the Marine Corp thinking I was going to do them a favor, but by the end of my time in boot camp, I realized that I needed them a lot more than they needed me.

White: My family moved rather haphazardly, so I didn't have a strong sense of belonging and, therefore, no self-confidence. I wasn't involved in any team sports; we never lived anywhere long enough. But by the time I finished boot camp, I could run as good or better than the majority of my platoon. And, I showered with 70 guys -- that part was easy.

Stroud: Were you self-aware about your gayness at the time?

White: I was but I wasn't prepared to talk about it. I went in before "Don't Ask, Don't Tell" even existed; it was just flat out illegal for me to be there. But I learned that everybody comes in with something. There were people who had chosen boot camp over prison and people who were there to lose weight or prove that they could, in some ways, be a "man." I'm air quoting that because I guess that applies to me too.

Stroud: How did you join?

White: My best friend Dale called me and said that he was going off to Parris Island for the summer to join the Marine Corp before returning for his sophomore year in college.

At the recruitment office, the recruiter and I chatted. I didn't know he was going to ask me if I was gay. It really wasn't cool being asked by a good-looking, super-butch Marine. When he asked if I had ever had any homosexual thoughts, I thought, "I'm having one right now," but I just said, "No." "Have you participated in any homosexual activities?" "No." I just went down the list no, no, no, casually. I didn't register any gay delight in my eyes -- as if I was hooked up to a lie detector and didn't want to send the needle flying.

Stroud: What was it like to then spend the next six years living a lie?

White: The whole time I was in the Marines I never acted any differently than I do now. I couldn't butch it up for 13 weeks. I didn't try. I just didn't tell anyone what I felt like doing behind closed doors.

Stroud: Seems like an extremely traumatic situation, but you mention on your blog that your philosophy is "Nothing's a Problem, Everything's an Adventure," and then thank the U.S. Marine Corps.

White: I love that I'll do anything -- that I'm willing to do anything. The Marines gave me that.

Stroud: When did you come out?

White: I came out when I was about 21. It was sort of accidental. I came out twice. I was working a summer construction job for an uncle and there was this really great looking guy on the job. There was all this grumbling on the construction site that he was gay, but I knew he wasn't. One night, my aunt and uncle asked me about the guy. I told them it was frustrating that this guy is being accused of being gay and he's not, but I'm not being accused of being gay and I am.

Stroud: You said you came out a second time?

White: Yeah, a couple of months later at my 21st birthday party, I saw my beautiful mother shuffling across the nightclub towards me waving her long fingernails in the air. She reached out for a big hug. "Johnny just told me that you're gay, I think that's great!"

White: I could have written a series of short funny stories but I wanted to write a book because of all these LGBT youths being bullied, the poor kids who didn't see hope past that bridge and didn't stick around long enough to realize that it did get better.

Those pioneers -- the guys that threw the fit at Stonewall -- that velvet revolution was the pebble thrown in the ocean that really did rock a wave on the shore. All those people that trail blazed -- the Harvey Milks of the world. I wish I had had those stories when I was 12.

Stroud: Tell me about the show you're going to be on this Friday, the premiere of the Mark Burnett reality series.

White: The show's called On the Menu. Each week four home cooks compete using dishes they've created for a national chain restaurant. My week is Chili's, which actually started in Texas. The winner's recipe goes on the menu there the next day. To me, that's saying: Let's get us back and let's get us socially connected. The viewer, instead of feeling like whatever they're watching on TV is over, can now go into the restaurant, sit down and order that dish that they watched win. Food -- it feeds you. Nothing gets more real than that, right?

Stroud: How did you go from Marine to TV writer and then food blogger?

White: TV had changed a bit, so I wasn't on staff on a show. I wanted to write but I didn't know what I wanted to write. My boyfriend took my phone and he showed me 600 pictures of food. He said, "Why don't you just give me a story about one of these dishes?" So I wrote a short story.

It was funny and he built a blog, Eat.Greg.Eat! For a year I put up maybe two, sometimes three smaller stories on that site, and what it did, without me realizing it, was exercise my writing muscles. Before long I was using humor and my memories and to craft these stories. Huffington Post called me and asked me to contribute.

Stroud: It sounds like food was really a catalyst for some life lessons.

White: The food was definitely the catalyst. For me, cooking is a great way to solve a story problem. Norman Lear once told me one of the reasons that he believes in God is that he can go to bed with a problem in Act II and wake up with a solution. I'm not a religious person so I might find that when I make a soufflé. Focusing and creating in the kitchen will help me push the story that I'm working on forward.

Stroud: One act of creativity can spur on a moment of clarity in another project.

White: That's it, the moment of clarity! Sometimes on a blank page I'll just type what's going on in my mind right then. Pretty soon the nuggets will start coming out.

Stroud: You mentioned Norman Lear and I know you played a doctor on the daytime soap Another World. You have a lot of industry contacts. Was it easy to land the spot in On The Menu?

White: Working with Norman, I learned what producers respond to. I knew what I needed to do to make sure that my tape got noticed. They were putting 5,000 people on tape for 40 slots. I didn't go in there waving glitter -- but it was pretty close.

Stroud: What was it like working with celebrity chef Emeril Lagasse and host Ty Pennington?

White: Amazing. I was cooking my ass off in one challenge when Emeril comes over and gives me a tip about the way I'm assembling my dish, referencing something he'd learned from Julia Child. My swirling world stopped and I paid complete attention, realizing what a special moment that was.

Stroud: How do you think that being on the show is going to change you, if it will?

White: I'm hoping that it's not only a great platform for my book, but for me personally, and that the exposure will lead to work.

Stroud: If you were to go back to the young man who decided on a whim to join the Marines -- knowing all that you do now, what would you say?

White: Do it. Do everything. It's not about the fact that you could die tonight or whatever, it's because I want you to feel and experience everything.