For nearly 30 years now -- ever since King Kong Encounter was first added to Universal Studios Hollywood's tram tour back in June of 1986 and that 7 ton, 30 foot-tall animatronic figure began blasting tourists with his banana breath -- theme park goers have been going ape for this massive movie monster. 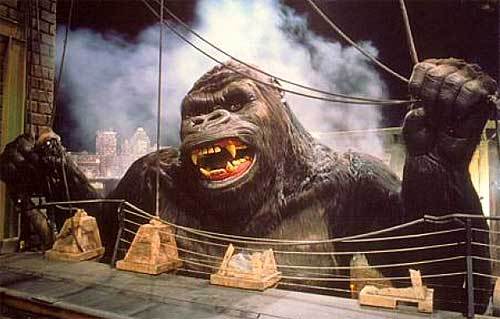 Which is why -- when the East Coast version of this Hollywood must-see threw open its gates on June 7, 1990 -- one of Universal Studios Florida's opening day attractions was Kongfrontation. This time around, though, it was a pair of Kings that menaced the crowds. With each of these 37 foot-tall, 13,000 pound mechanical creatures attempting to swat an overhead tram full of terrified tourists out of the sky.

Sadly, Kongfrontation closed its doors back in September 2002 so that its huge show building could then become home to USF's first-ever indoor roller coaster, Revenge of the Mummy. And as for the oversized animatronic ape which used to thrill tram riders at Universal Studios Hollywood ... He was lost back when a three alarm fire broke out on the backlot back in June of 2008. And by the time that conflagration was contacted, King Kong Encounter had burned to the ground. Along with the original version of Courthouse Square from Back to the Future and most of USH's New York Street. 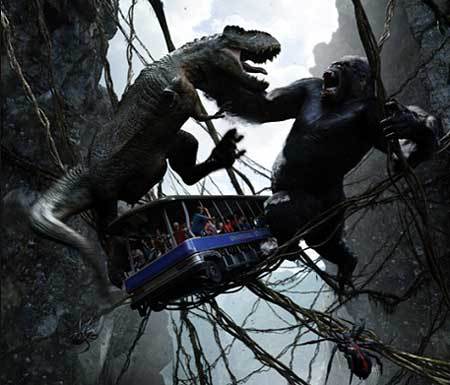 But as they say, you can't keep a good man ... er ... ape down. Which is why -- as soon as that backlot fire at Universal Studios Hollywood was snuffed out -- Universal Creative (i.e., the arm of Universal Parks & Resorts which designs all of the rides and attractions for NBCUniversal's theme parks) -- began making plans for the return of the King. Using Peter Jackson's 2005 remake of this cinematic classic as their jumping-off point, they added King Kong: 360 3-D to the USH tram tour. Which -- thanks to 3-D HD imagery which was then projected onto two 200-foot wide screens (not to mention a tram motion base plus some wind & water effects) -- gives Universal Studio Hollywood visitors a view to Kong battling a trio of V-Rexes.

Mind you, as impressive as King Kong: 360 3-D may be, it's still only a two-and-a-half minute vignette on USH's tram tour. So when Universal Creative decided that it was time for Kong to make his dramatic return to the Orlando market, they didn't just go king-sized with Skull Island: Reign of Kong. They decided to make this brand-new immersive ride-thru experience for Universal's Islands of Adventure genuinely massive. 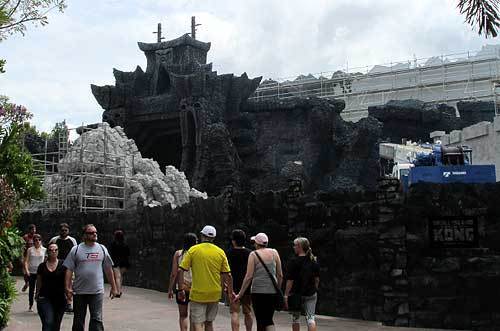 "Everything about this ride is going to be big. Take -- for instance -- Reign of Kong's ride vehicle. Which is 40 feet-long," Mike West, the executive producer of this still-under-construction IOA attraction, stated. "And as for the ride itself ... These days, the average theme park ride is only 4 minutes in length. Whereas Skull Island: Reign of Kong is going to be just under six minutes in length. Five minutes and 50 seconds, to be exact. So we're going to give our guests an exceptionally long ride through a highly immersive environment. And I know that they won't be disappointed when they encounter all of the new technology, new tricks & fun things that we're going to install along Reign of Kong's ride track."

Late last month, the Huffington Post was one of just a handful of news outlets that got to visit the Skull Island: Reign of Kong worksite. And as 300 workmen & artisans climbed scaffolding to finish sculpting & painting the Great Wall that not only sets the scene for this opening-in-the-Summer-of-2016 thrill ride but also hides its truly huge show building, West walked us through this attraction's opening moments. 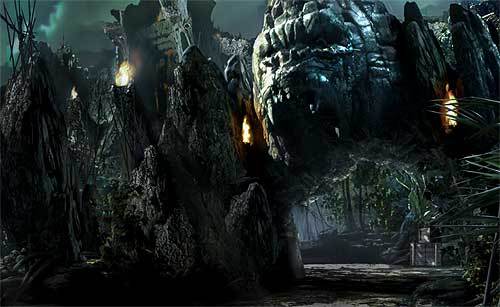 "Coming off of Islands of Adventure's main promenade, the guests will first pass the Skull Island: Reign of Kong marquee and then walk through this attraction's main entrance. Which is this archway that's capped off with a giant stone version of King Kong's skull. From here, the guests will find themselves in a dense jungle surrounded by some rather dead looking plants. And as they make their way through this jungle, the guests will eventually come across some crates & supplies & things. Which suggests that an expedition has just landed on Skull Island," Mike continued.

As Universal Orlando guests make their way through the queue area which winds back & forth through this expedition's base camp, they'll then get a lot of Skull Island: Reign of Kong's backstory through a radio broadcast. An NBC news broadcast from the 1930s, to be exact (Which -- given that Universal Parks & Resorts is the theme park subsidiary of NBCUniversal, a division of Comcast -- only makes sense), complete with authentic-to-the-period musical interludes from the NBC Orchestra.

"Just beyond the base camp, you'll see the ruins of this ancient temple. As you make your way along this part of the queue, you'll eventually enter those ruins. And you go deeper & deeper into this supposedly abandoned temple; you'll then get a sense of the native presence on Skull Island. You'll also meet a couple of characters from the expedition who will then fill you in on even more of Reign of Kong's backstory before you then continue on to this attraction's load area," West explained.

And the entire time that guests are making their way through Skull Island: Reign of Kong's elaborately themed queue area, they'll be moving from large open areas to tight spaces. Places that at first confine these theme park visitors and then suddenly open up. Mind you, this was a deliberate design choice on Universal Creative's part. All with the idea of this thrill ride's exterior & interior queue space should properly establish a tone for the show that's to follow. 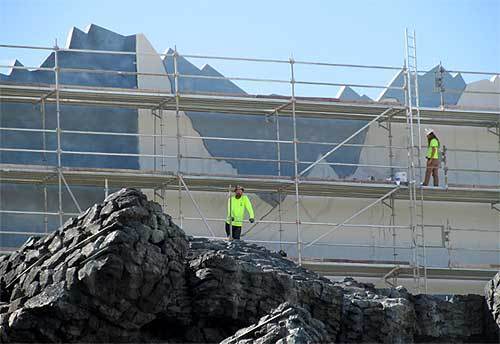 "Once they get to Reign of Kong's load area, the guests hear one more radio broadcast. Which is this transmission from the expedition's base camp. Which is somewhere deep inside the jungles of Skull Island. This transmission is supposed to tell our driver where he or she needs to go once we get out in the field. More to the point, it hints at what the guests are actually going to encounter once they finally climb onboard Reign of Kong' s ride vehicle," Mike said.

"And once these guests take their seats, this massive ride vehicle will then come roaring out of the ruins. It'll bounce along this crumpled temple road before then making a hard right turn. And as our ride vehicle approaches the Great Wall, you'll hear drums beating. You'll see these flames flaring up outside the wall. And then -- as these massive temple doors open ...," West teased.

It was then that this Universal Creative rep got kind of cagey. Refusing to go into great detail about what guests will actually encounter once their ride vehicle actually enters Skull Island: Reign of Kong's massive show building. 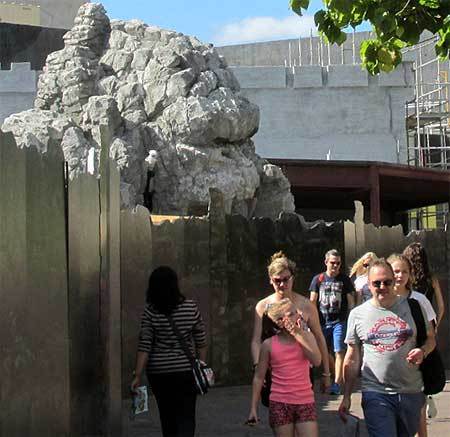 "What I can tell you is that -- once our guests enter this attraction -- they'll then go through about five or six scenes that are filled with foreboding dinosaurs and creatures from the underworld that they've never seen before," Mike stated. "Everything's big and kind of overwhelming on Reign of Kong. And I think that Universal Orlando visitors are going to be totally amazed by what they encounter on this ride. It's really going to be an incredible experience."

But what exactly is this experience going to be like? Is Skull Island: Reign of Kong a clone of USH's King Kong: 360 3-D? Will it continue the storyline of Peter Jackson's 2005 King Kong remake? Or does Reign of Kong take its inspiration from that Skull Island movie which Warner Bros. & Legendary Pictures are currently shooting in Hawaii? West insists that the proper answer to these questions is "None of the above." 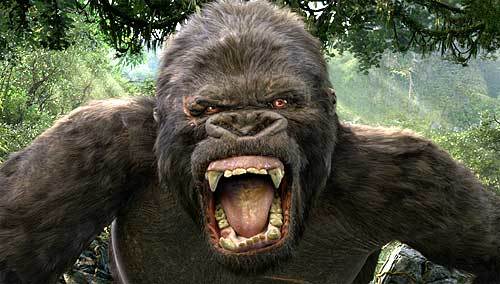 "This ride is really its own entity. Look, there are obviously some things -- the sculptures in our rockwork, for example -- that we clearly carried over from Peter's Kong movie. But this attraction is different from that film. It's also different from King Kong: 360 3-D in Hollywood," West explained. "Sure, we've taken a few elements from King Kong: 360 3-D. But Skull Island: Reign of Kong is really its own land. More to the point, with this ride, we're bringing our guests to Skull Island for the very first time. With our previous Kong projects, King Kong has come to the human world. So we've taken you to places like New York City where Kong has then gone on a rampage. But this time around, we're taking our guests into Kong's world. A place where he's in complete control."

"Look, King Kong has obviously been a huge part of Universal history both in films and in theme park attractions for many years now. And with Skull Island: Reign of Kong, we're looking to do some next generation storytelling with this screen legend. Not have our guests passively experience this attraction but actually insert them into the story. So that they can then become part of the Kong legend as they go through this ride," Mike stated.

"And how exactly is Universal Creative going to pull that off?," you ask. The answer to that question will be revealed in the Summer of 2016, when the very first ride vehicle rolls out of that elaborate temple ruin and then rumbles through the gates of Skull Island: Reign of Kong at Universal's Islands of Adventure theme park.