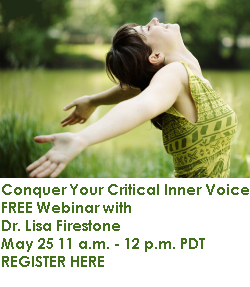 I scanned the sea of black-robed 20-somethings for my sister's familiar face. As I glanced over each aisle, I noted the beaming expressions of the satisfied graduate students about to receive their Masters degrees in Journalism. When I finally caught a glimpse of my sister, I was glad to see that in spite of the 100 degree heat and jumbled instructions on the ceremony, she possessed the same calm and contented look as those around her.

I couldn't help but think just how different this look was from the one she was sporting only weeks ago, when she was stressing over her workload and uttering all-too-familiar phrases of her student life such as: I'm not going to get everything done. I'm doing a horrible job. They hate my thesis. My grades are going to be terrible. I'm never going to get a job. Yet, in that moment, poised to receive her diploma, she felt her self-attacks subside, as her attitude shifted from "I can't do it" to "I did it."

I didn't have long to ponder this transition, before the dean welcomed the honorary speaker, Arianna Huffington, to the stage. Within minutes, I watched Arianna's dynamic and honest manner of speaking literally lift the flock of students a little higher in their folding chairs. But what struck me most in her speech was when she introduced her ambitious audience to the idea that each one of us has an "obnoxious roommate" living in our heads. This "roommate" is there to hold us back and tell us we are not good enough to succeed. Arianna explained how with every step forward, we should be wary of our obnoxious roommate, as it tends to become even more obnoxious, putting us down and warning us of potential failure.

Listening to her speech, I was impressed by the parallels between Arianna's inspiring message and my father's, Robert Firestone, and my own 30 years of research into the concept of the "critical inner voice." Like the "obnoxious roommate" described by Arianna, the inner voice represents an internalized critic that we all possess to varying degrees. Although this isn't an actual voice we hear, the critical inner voice describes destructive thoughts we all experience toward ourselves, as if a critic is living in our heads commenting on our actions. It was this inner critic that had been telling my sister - a straight-A student - that this time, her grades wouldn't be good enough. And it was this same critic who told her she wouldn't get into graduate school in the first place, much less graduate two years later.

Each one of us can recognize those nagging thoughts that occupy our heads causing us to feel fear, humiliation, shame, guilt or dejection. During the recent economic downturn, I was surprised by how quickly clients and friends of mine who'd lost their jobs turned on themselves and began telling themselves things like: You're worthless. No one wants you. You'll never get another job. Most of us observe a similar embarrassed and self-hating reaction in people going through break-ups, divorces, first dates, job interviews, college applications and countless other life-shifting events. Although these thoughts or "voices" become more apparent in significant moments, they not only come when we are making a change or moving toward a goal, they are there everyday, second-guessing us, nagging us, extracting energy and inserting doubt. All too often, they are directing our lives much more than we realize.

So where do these voices come from? When we are young, we are deeply affected by the labels put on us and the attitudes we experienced directed toward us. For example, as a shy fifth grader, I was consistently humiliated by a sadistic teacher, who forced me to stand up in front of the class to give reports, then publicly scrutinized my every move. Without knowing it, I internalized this teacher's point of view, and allowed it to stay with me as an adult. Whenever I had to get up in front of a crowd to speak, I would feel intense fear and attack myself, thinking that I would stumble over my words, forget what I was saying or that people would get bored, and I would once again humiliate myself. It wasn't until I remembered and made sense of my fifth grade experience that I understood where this mean attitude came from. Had I never made this connection between my fear of public speaking and this early life experience, I may never have been able to separate from this alien point of view. I may never have become a psychologist or had the opportunity to travel the world presenting in my field.

Each of us can relate to childhood experiences in which we felt hurt, embarrassed or afraid. What we may not recognize, however, is how these stressful or traumatic experiences have actually shaped the way we currently feel about ourselves. The voices we internalize can come from parents, caretakers, teachers, bullies - anyone who had an impact on us early in life. Unfortunately, the times we are affected most in our development occur in moments of stress, when a person we trust "loses it" with us. For example, a parent who is usually calm and compassionate can still hurt his or her child by suddenly becoming frustrated and lashing out.

The little things parents say or even a look on their face can feel dramatic to a small child. What affects us as adults isn't necessarily what happened to us but what we tell ourselves about what happened to us. For example, an interaction in which a parent becomes frustrated with a child for taking too long and making him or her late can seem like no big deal to the parent once they're on the road. But the child may have been frightened or jarred by the rapid mood change and alteration in their parent's expression or uncharacteristic roughness. Ultimately, the child may identify with the parent, on whom he or she depends for survival. The child may even take on the parent's point of view in that moment of stress, seeing him or herself as slow or burdensome. Whether we grow up to embody the image our parents had of us or to rebel against it, we are still being distorted by a point of view other than our own, a view being directed toward us rather than us seeing ourselves as who we really are.

The voices we experience as adults have deep roots in our pasts. They are not simply the flippant comments of an obnoxious roommate, but painful connections to experiences that shaped who we are and how we perceive ourselves. These voices can seem cruel, telling us we are too stupid, fat, lazy or unattractive to go for what we want, or they can seem soothing, telling us not to bother with the job interview, to reward ourselves with another piece of cake or that we are happy being alone. Like an overindulgent parent or the roommate who has a bad influence, these coddling voices are an enemy in disguise, luring us to take self-destructive actions, then punishing us for our mistakes. Whether cruel or seemingly kind, all of these thoughts are the commentary of an inner enemy.

The good news is that the more we recognize this enemy, the more effectively we can fight it. As we understand where these voices came from, we are better able to separate from them and take on a more compassionate and realistic point of view toward ourselves. Freeing ourselves from self-shaming attitudes facilitates our ability to change qualities in ourselves that we don't like and appreciate qualities we do. On May 25, I will conduct a free Webinar "Conquer Your Critical Inner Voice" to help people learn to identify and target this inner critic. The more we recognize and separate from this critic, the more likely we are to live free of imagined limitations and evict this "obnoxious roommate" once and for all.

Visit www.psychalive.org to learn more about the critical inner voice.