Who would think of using a soda can as a bomb? Terrorists.

In the early 1980s, a US Army Reserve unit at Fort Belvoir, Virginia prepared for a deployment to Europe. Groups like the German Bader-Meinhof Gang and the Italian Red Brigades targeted NATO in an older wave of terrorism in Europe. The academic preparation for deployment included counter-terrorism training.

As the students entered the room, the instructor invited them to grab a drink from several cans on an adjacent table. Lifting one in particular relieved pressure on a trigger device in the bottom of the can, setting off a loud bang intended to simulate an explosion. Having grabbed the classes' attention in a vivid way designed to ensure students would remember the lesson, the instructor warned that almost anything can be made into a bomb or booby trap. A lesson over 35 years old reminds us of the Biblical wisdom that there is "nothing new under the sun."

It comes as little surprise that just days after Metrojet Flight 9268 crashed in the Sinai Desert a preliminary analysis from the insurance industry highlighted the possibility of an "insider threat" to aviation security. The private sector, driven in a free market economy by the profit motive, must stay abreast of risk in a way different from governments. Such an analysis from the intelligence community could be subjected to political pressure from a variety of competing agendas. It could expose the agency espousing this theory to risk to their funding and reputation if the analysis turned out to be wrong.

Though a formal investigation will take months to complete, new evidence allows forming a plausible hypothesis of what may have happened. As the insurance industry is acutely aware, an insider threat at the airport in Sharm el-Sheikh means possible risk at other airports outside the United States and Europe.

The last and key piece of evidence, disclosed to support ISIL's claim that they bought the aircraft down, is a soda can. A key unanswered question is whether this brand of soda was part of the Metrojet beverage service. There are two galleys on an Airbus 321. One just behind the cockpit, and another in the tail of the aircraft. The distribution of the wreckage, as precisely illustrated by the BBC based on information from the Russian Emergency Ministries, shows that there are two wreckage sites. 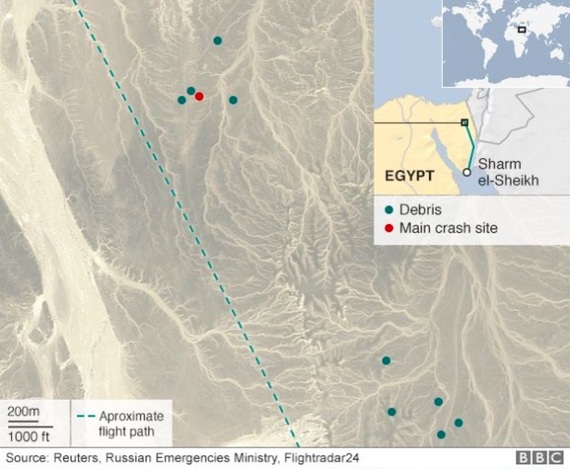 The field to the north, described as the "main crash site," contains the debris from the Airbus nose, forward door, cockpit, and wings. The second debris contains the tail of the aircraft, as shown in a photograph on November 17 in Aviation International News. The picture of the severed tail shows it broke from the aircraft at the location of the rear galley, as shown on the Airbus A321 cabin diagram. The same cabin diagram shows there are four lavatories. Any of these would allow placement of a bomb near the skin of the aircraft, where a small device could bring down the jet though explosive decompression. One lavatory is behind the cockpit, one in the center of the aircraft, and two in the rear, just forward of the rear galley.

Publicly-available evidence, referred to in the intelligence community as "open-source," indicates the bomb was in the cabin. Evidence disclosed from the Russian investigation says explosive residue was not found on the bodies of passengers, but did contaminate the wreckage. The evidence suggests the bomb caused the tail section of the aircraft to break off from the nose, cockpit, wings and main body of the aircraft. This indicates it was likely planted in the rear of the aircraft.

The lavatory or the rear galley are possible locations for the bomb which ISIL claims was concealed in one or more cans of soda. Though a conclusion with 100% analytic certainty of whether the bomb was in the rear lavatory, galley or other location is not yet possible, these appear the likely locations that would shield passengers from explosive residue.

Anyone who flies and has seen the loading of food service in a plane's rear galley know that both locations are accessible to airline or contracted catering employees who load the galley through the plane's rear door. An "insider" on the fight would also have access to these areas. The Russians will know the most about the jet's passengers, and whether this was a viable possibility.

Available evidence at this time points to an "insider threat." Someone with privileged access to airport food service and flight line facilities, rather than a passenger who was required to go through airport screening.

This is a sobering thought as we approach the holidays and peak travel season. The attack in Paris shows ISIL wants to project power beyond their home base in the Middle East. The traveling public faces increased warning and risk of attempts by ISIL to assert their ability to threaten aviation security. Their maniacal desire to bring about a religious apocalypse cautions that they may also seek other ways to disrupt a holiday season celebrated in nations with religious freedom as one celebrating the hope of Peace on Earth.

ISIL, described by our Muslim friends and allies as "da'esh", follows the same "playbook" titled "Managing of Savagery" as does al Qaeda - their Salafist predecessors and inspiration.

As Congress continues to study the tragedy that occurred in Benghazi in 2012, and Washington is consumed by the upcoming elections, our elected leadership should consider that ISIL and other Salafist groups like Boko Haram and al-Shabab also have unknown access thousands of surface-to-air missiles that went missing when Libya fell in 2011. In Paris, ISIL and their Salafist allies have shown the desire and intent to use indiscriminate violence to achieve their political ends.