A common refrain at any Trump rally is "We don't win at anything." But after the Iowa Caucus, "we don't win" also applies to the Trump campaign, thanks to a bad decision to skip the Fox News debate. Evidence shows Trump's lead shrank in polls after the debate, and may well have contributed to his near-third place finish.

Going into the Fox News Debate on Thursday Night, January 28, the feeling among most pundits was that Donald Trump got the best of the GOP field, Megyn Kelly, and Fox News, by skipping the debate.

Chuck Todd, Mark Murray and Carrie Dann's NBC News First Read wrote "Earlier this week, we wrote that Donald Trump's decision not to attend Thursday's GOP debate could be a brilliant tactical move -- or a disastrous one. Well, after watching the two hours of debate last night, it was clearly the former."

John Harwood with CNBC concurred. So did Jonathan Chait with NY Mag. CNN reported that Fox News' debate ratings took a hit. You'd be hard pressed to find anyone who thought that skipping the debate hurt Trump (except for me, and I'm hardly a well-known writer). The feeling was that Trump had sewn up the nomination. On the night of the Iowa Caucus, an MSNBC newscaster pointed out that Trump had won eight straight polls.

By the end of the debate, Trump's lead shrank to 3.6 percent in the five polls after the Fox News debate. Trump led the following polls: Gravis by four points, Des Moines Register by five points, Opinion Savvy by one point, Emerson by one point, and Quinnipiac by seven. You can follow these on realclearpolitics. 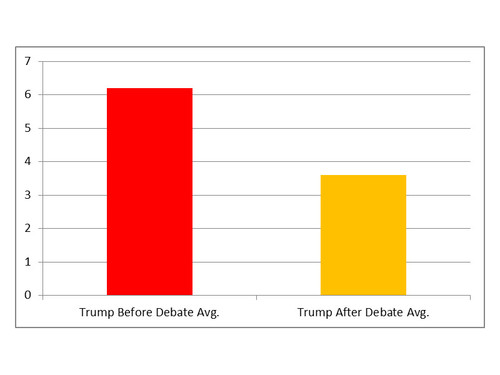 If we take out the Quinnipiac polls, which were much different from the others (almost in outlier territory), Trump's lead shrank from 7.25 points to 2.75 points. Results from the Iowa Caucus illustrate how far off Quinnipiac was, clearly trending in the wrong direction. I know it's not many points, but it's easier to overcome a three point lead than one closer to double-digits.

There is some good news, in that Trump seems to have widened his New Hampshire Primary vote by an average of 23 points after the debate (in three polls: Boston Herald/FPU, CNN/WMUR, and University of Massachusetts Lowell/7 News) whereas his lead was 17 points in the three polls before the debate (polls conducted by Emerson, NBC/Wall Street Journal/Marist, Suffolk University).

But even announcing that he would snub debate watchers, and his supporters, did matter nationally. Two days before the Fox News debate, Trump was sporting leads of 22 points (CNN/ORC) and ABC News/Washington Post (16 points). On the day everyone knew Trump pulled out of the debate, his lead had whittled down to 10 points. The aura of invincibility morphed into arrogance. Now it's about to morph into vulnerability for the tycoon.