The EVO is back, and so is the kickstand.

A close cousin in size and resemblance to the new HTC One X on AT&T, the EVO 4G LTE runs Android 4.0 "Ice Cream Sandwich" with a stripped-down HTC Sense interface and features a 4.7-inch super LCD display, a sophisticated 8-megapixel rear-facing camera, Beats Audio enhancements integrated throughout the entire phone, and...a small red kickstand on the back of the phone, so that you can prop your phone up as you watch videos. (It's a throwback to the original EVO, which also had a rockin' kickstand).

Novel as a smartphone kickstand may be, that's not the feature that execs at Sprint and HTC seem most excited about. That title belongs to the EVO 4G LTE's "HD Voice" capability. The EVO 4G LTE will become the first HD Voice-capable handset that runs on an HD Voice-capable network available in the United States (the verbiage is very specific, a Sprint representative told me). Essentially, HD Voice is exactly what it sounds like: It's a technology, dependent on both the device and the network, that clears up the noise surrounding a person's voice on a phone call and clarifies each word you speak. Sprint will become the first network to offer HD Voice clarity, and the new EVO will be its first HD Voice-ready device. (Sprint's network should have the necessary bandwidth some time in late 2012).

I tried out the HD Voice technology in a demo booth at the event, talking on the phone to a lovely gentleman from Sprint using the original EVO followed by the EVO 4G LTE. The gentleman from Sprint (whose name I've lost -- my apologies!) pumped in some loud R&B music on his end, and switching between the EVO and EVO 4G LTE was night and day. The EVO 4G LTE completely eliminated the music in the background, whereas on the original EVO I could only faintly hear the gentleman over the throbbing bass. This was, of course, a demo, and was certainly set up to operate perfectly and showcase the technology under optimum conditions, but still: If it works as advertised, this could be a real winner for Sprint and totally change what we expect from voice quality on our phone calls.

Not everything, however, worked as advertised. The EVO 4G LTE comes with 1.5 GHz dual-core processor, and in my brief tests at the event, the phone had some speed and touchscreen issues. In one instance, performing a simple Google search nearly froze the phone, giving me a black screen for about a minute; subsequent searches on another device went more smoothly, but that's not the kind of performance you hope for at a media showcase. These are demo units, of course, not the final products, but it would be a shame if the EVO 4G LTE were undone by a lackluster processor.

I say it would be a shame, by the way, because the EVO 4G LTE is, despite its alphabet soupy, WHERE IS THE CAPS LOCK BUTTON name, a real beauty in hardware and software design. The form factor is impeccable and the phone itself is super lightweight; the screen, meanwhile, is, along with the HTC One X, perhaps the best I have ever seen on a smartphone. Approaching it, you might assume you were looking at a dummy unit, or a handset with a colorful sticker on the screen. It's that impressive in real life.

Alas, it might be a while before you get to experience the EVO 4G LTE in Sprint stores: There's no definite release date, though pre-orders begin on May 7 and we're told a release will follow soon after. The EVO 4G LTE will retail for $199 with a new two-year contract.

Take a look at some snazzy official images of the EVO (below). 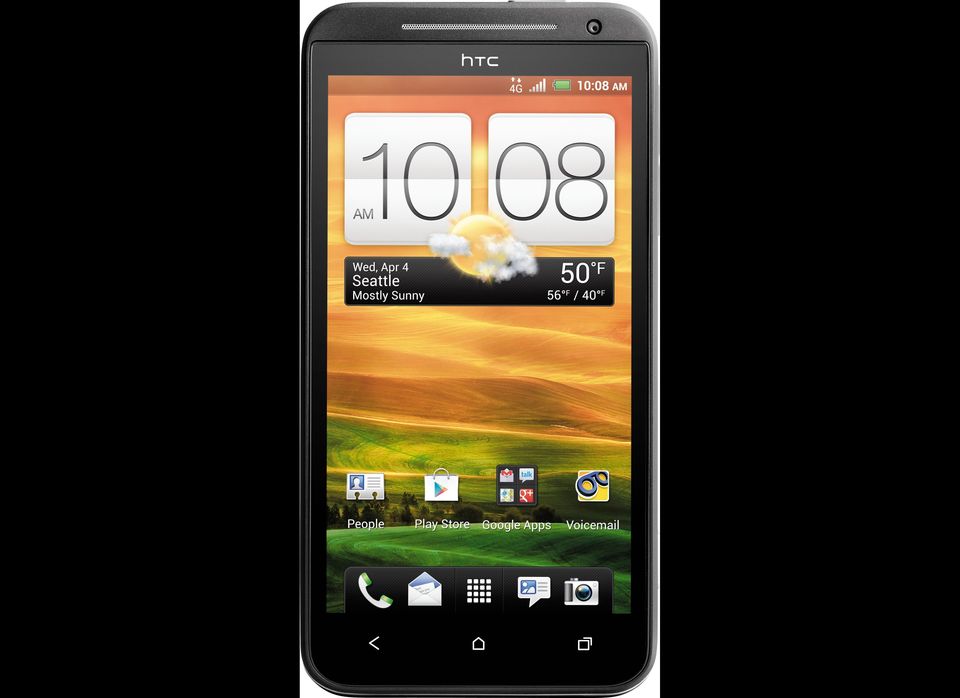 1 / 8
The HTC EVO 4G LTE
The HTC Sense has been pared down, according to HTC execs. The iconic flip clock remains, however! Image credit: HTC