I get emails from creationists occasionally, mostly good-natured ones rather than hate mail, but always disputatious in nature (of course). Recently I engaged in a dialogue with a family friend who is a creationist of the "your faith in science is no different from my faith in God" variety, and part of our disagreement came around to the question of whether the world is getting better or worse for people. This question isn't central to whether or not evolution is true, but it may have a key role to play in the question of whether knowledge of evolution is useful.

As evidence for moral improvement, I cited Steven Pinker's research on declining violence in The Better Angels of Our Nature, and in defense of moral regression my friend cited rising divorce rates and increasing narcissism, individualism, instant gratification, and the "subtle violence" that leads to "relationship breakdown." As evidence for his view, he sent me a New York Times article entitled "Is the World More Depressed?"

So is the world more depressed? And if so, what does that have to do with evolution? Here's my response to my creationist friend in the form of a blog post.

The first thought that comes to mind is a question: Once you've dismissed science as "a large, constantly shifting field of all kinds of contradictory theories," how can you then go on to quote scientific studies in defense of your view that the world is getting worse? It seems to me you must either accept the findings of science as a by-and-large reliable guide to what is true and real (including the scientific evidence for evolution), in which case you must critique the findings of science using the tools of science when you think it has gone astray, or else you must cease and desist all reference to its findings. Any attempt to have it both ways, dismissing science in general while also citing it in defense of your views, strikes me as deeply hypocritical.

Moving on, I have another observation: The New York Times article you sent me attributes rises in stress and mental illness and depression to "our awareness of other people and where we stand in social space" and points out that "[w]e know that social position affects both when you die and how sick you get." Note that the important thing here is social position, which means relative position. In other words, it doesn't matter how much you have, what matters is how much you have compared with others around you. When the article states with confidence that "[w]e know that....," the writer is talking about knowledge based on scientific evidence, and here's an excellent video that sums up the research admirably:

Now ask yourself: Why would this be? What part of God's plan would explain the fact that relative differences in wealth and resources are so much more important than absolute differences in wealth and resources? Does this interesting fact about human nature have anything whatsoever to do with Adam and Eve, or Moses, or Jesus? Is it predicted by the Bible you believe in?

My point is this: The details only make sense in light of our evolutionary history. The observed pattern is just as true of baboons as it is of humans. In primates, greater inequality in social status usually means greater inequality in survival and reproduction rates, which is why our stress hormones have evolved to be consistently sensitive to changes in rank. We are the descendants of primates who followed those hormonal triggers to evolutionary success.

What we're observing is an evolved nature that's poorly adapted to the modern world, because technology, urbanization, and even agriculture are relatively modern developments, and genetic evolution can't keep up with cultural change. In some ways this is good, because cultural change has recently made us less racist and less sexist and less violent than the evidence suggests we used to be dozens or hundreds or tens of thousands of years ago. Culture can make us better people than we apparently evolved to be.

But the benefits of cultural change are not cost-free. Thanks to technology and media, we have more people to compare ourselves with, more people to compete with, and more people to feel inferior to, and this constantly triggers stress hormones that harm our physical and mental health, just like it does in baboons, only with greater intensity. So culture can also make us physically and mentally sicker than we evolved to be.

Jonathan Rottenberg's new book The Depths: The Evolutionary Origins of the Depression Epidemic explores these links in much greater detail. I haven't read it yet, but Maria Popova gives a nice overview in her recent Brainpickings post.

A better scientific understanding of the evolutionary factors at play here will help us address the problems of depression and social dysfunction more systematically and more effectively. I hope we share the common goal of increasing human well-being and reducing the amount of misery in the world. If so, science can help us towards that common goal, while the denial of science will only set us backwards.

So what do you think: Is evolution worth a second look?

For more on the societal effects of inequality, I recommend: 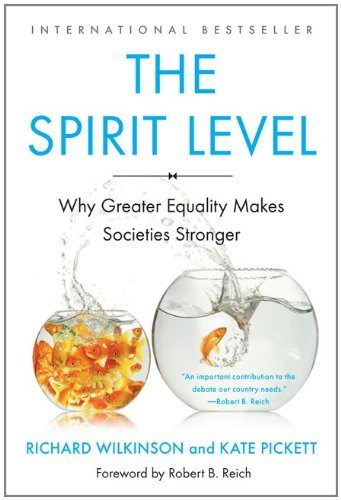