In my previous life, I was one of those women. Obsessed with my dogs. Actually, my attention focused on our female Boston Terrier, Gigi, while her counterpart, Max, was my husbands BFF. Gigi was on TV, in couture-pet fashion shows, has more clothes than some humans, and also visits more five star resorts than most.

When I became pregnant, every adult I knew that had both children and dogs were quick to relay that my days of prioritizing Gigi were dwindling. Pregnant and hormonal, it enraged and saddened me. I would surely be the exception. Early on, I began researching best ways to prepare the family pets for a new baby as well as how to introduce the newborn to the pups. Following advice like slightly altering their daily food and walk schedules plus having them listen to the sound of a crying baby on YouTube, I felt like I was on my way to becoming dog-mom of the year. Through morning sickness and unbearable summer temperatures, Max and Gigi had daily walks, ate freshly cooked chicken (as a vegan, it was an especially daunting task while pregnant,) and wore the hippest big brother and sister doggie gear available at designer dog boutiques (absolutely no big-name pet store clothes for these pups.)

Fast-forward to having a newborn.

The transition was unintentional and immediate. Luckily we had family visiting, so the dogs did eat everyday. And, about those walks... those first few weeks (maybe months) a dog walk never made my to-do list. The pups continued sleeping in bed with my husband and I however, the snoring of my husband and Max ensured a ban to the spare room. Gigi, who had always been my little sidekick, was now going through intense emotional and physical side effects that mimicked pregnancy and motherhood such as lactation, vomiting, and depression. Although I felt horrible, I didn't have the time, patience, or even mental capacity to give her extra TLC. In my defense, I was breastfeeding a barely-sleeping baby every two hours. And, although I didn't have time for her, she was not letting me out of her sight. I would wake up startled on the nursery glider, with my daughter and Gigi both sleeping on me. I soon became ok with it, as long as the seventeen-pound pup didn't sit on my seven-pound baby. 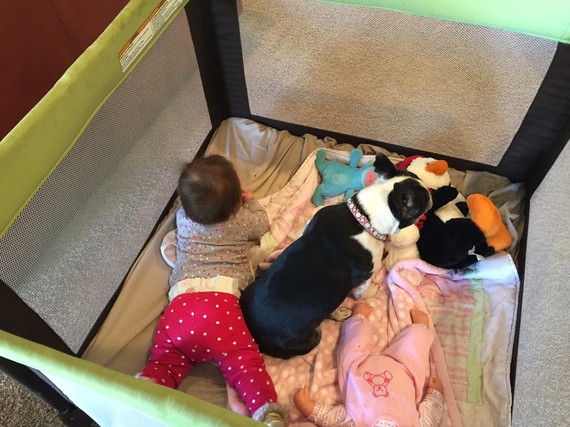 Fast-forward to having an infant. I have an 11-month-old daughter and a seven-year-old dog. Unfortunately, our older Boston Terrier, Max, has passed away. Gigi is grief stricken, lacking attention, jealous, but slightly enjoying being one of the baby's obsessions. Doggie and Gigi are two of the words my daughter can clearly say and she loves to bark along with any dogs nearby. Before Max passed, he was her buddy. She learned to stand up while leaning on him and she could pull on any of his facial features for hours while he sat approvingly. She was too young to notice his passing but Gigi did quickly fill his spot, whether or not she wanted too. Most days Gigi does get a walk but she's next to the stroller. She also gets fed -- the times do vary, and I can usually remember to give her a doggie treat midday, but I hardly make those trips to the overpriced dog store for specialty treats. I also spend a majority of my day policing my daughter and pet: baby wants dog toys, food and water while dog wants baby food, toys and blankets. And worst of all, Gigi now wants to hump my daughter because she has no other dog to dominate. I haven't purchased any new pet clothes since my daughter was born, our Christmas card didn't include a picture of the dogs, and, most days, it's hard enough getting an 11-month-old out of the house, so I'm definitely not trying to take Gigi along on trips to the park or outdoor play dates.

Realization. Dogs are dogs. They may fill a certain space prior to having children but, once that baby comes, the dogs will transition to becoming the family pet. With time and patience, you can learn to reincorporate them into your daily life and treat them exceptionally well. They can also be an important and loving part of your family. However, the obsession with your dog will be placed on hold. There has not yet been an exception.

Working hard to achieve it all.