Many of the body parts that are shared by both genders make sense. For example, the face. Being able to see, smell, hear and taste is indisputably wonderful, and having all of these sensory organs positioned at the highest point of our bodies is logical, because we're predators, and bitches gotta eat. Arms, hands, opposable thumbs? Genius. Bipedalism? The earth is ours.

But I feel like my ethereal awareness or soul -- however you prefer to think of it -- entered the human race at an awkward crossroads where most of the shared characteristics have had their kinks worked out, but the gender-specific ones need to be thrown back into product development. In simpler terms: I'm mad at my girly parts.

Boobs, for example. While I would never question the biological imperative of feeding one's young, must our baby-feeders degenerate so rapidly into ungainly floppiness? Honestly, does Mother Nature hate jogging past the age of 20? After a certain number of years, even the most eye-catching pairs of milk-makers succumb to gravity and splay themselves across their owner's abdomen creating what amounts to an extra set of sweaty armpits. Epic fail, Evolution. No creature needs two sets of armpits.

And I don't understand why breasts have to be right out in front, filibustering everything from platonic hugging to eye-to-eye conversation. For Pete's sake, some of them are so impressive even I can't help but stare.

Wouldn't boobs be so much better if they were retractable? Imagine how fantastic life would be if our boobs only made an appearance when we really needed them and the rest of the time we could have non-jiggly, sweat-free chests and adorable, dainty nipples just like men do. This might seem far-fetched, but it's not; uteruses and penises do it, so why not boobs? Just think - no more bras! My personal Shangri-La. *sigh*

You might be thinking, Well who's forcing you to wear a bra? And you're absolutely right, nobody's putting a gun to my head and forcing me to wear a bra. But there's this thing called society, okay? Sometimes a girl wants to shop at other places besides Walmart.

But back to the original purpose of boobs, which is supposedly for the feeding of one's young. Let's not even dwell on how dreadfully wasteful it is to evolve two major appendages that are only used for a small fraction of one's lifespan (and yes I know cave people probably breastfed a lot longer than we do and probably had kids hanging off their boobs like alllll the freakin' time so it made more sense back then for boobs to be in constant ready supply. Yeah. I know.)

But let's instead focus on more important things like how, ohmigod, boobs are so insanely delicate. WTF, evolution? If we're gonna excrete life-nectar from a body part, could that body part maybe be a little tougher? For example, perhaps the milk could come out of a finger, or possibly an elbow? Or maybe we could regurgitate pre-masticated sustenance into our babies' mouths a la birds and Alicia Silverstone? Anything is better than bloody nipples, okay?

Well I've spent enough time railing about boobs. Let's turn now to vaginas. Yeesh. Talk about an extra armpit. The irony of burying the female body's ultimate physical pleasure zone between hard-working sweaty legs and covering it up with a giant bush of coarse hair is almost too much for me to handle. Mother Nature, why do you want our vaginas to stink? Why would you do that to us?

And also, why, in the name of all things holy, must vaginas look like pecans? Or, conversely, and perhaps even more pressing: Why do pecans look like vaginas? 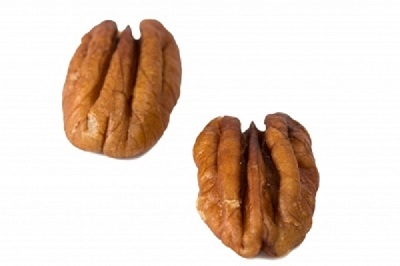 But the thing that most bothers me about vaginas is this: Why are they so damn small? Is it just so the penis can fit in there all snug as a bug in a rug? Are you trying to tell me, Mother Nature, that just as with everyotherfreakingthing in life, it's all about him??? I suppose I sort of understand the logic in the "tight fit" concept because, ya know, reproduction and propagation of the species and all, but HELLO, the tiny vagina hole completely throws off the whole childbirth thing. No animal on earth has a harder time squeezing out their screaming progeny than a human. Wouldn't it make more sense if either penises and vaginas were as big as babies or babies came out as small as penises? (I vote for the latter, oh please oh please oh please I vote for the latter.) I just really can't wrap my head around the huge size discrepancy among the only two things on earth that spend any amount of time hanging out in the vagina.

And lastly, in our discussion of female anatomy gone horribly awry, let us not forget buttholes. I realize men have buttholes too, but they don't have theirs placed right next door to another super important and easily infectable hole. It's just a bit surprising to me that although humans have had tens of thousands of generations to evolve a clean, non-disgusting method to rid our bodies of waste, that -- no seriously -- quivering anuses and poop was the best we could come up with.

I have tons of other questions about tonsils, appendixes, wisdom teeth and superfluous body hair, but I'm a little too pissed off right now to process any thought other than the unrelenting compulsion to get off my computer and go find some diaper wipes to do something about this gross vagina of mine. (And ladies, always remember to wipe front to back, because buttholes don't make sense!)

Yeah, I think it's abundantly clear that anatomically, women have gotten the short of the stick. Actually, wait a minute... we got no stick. We got a hairy, stinky, pecan-looking, disproportionately tiny hole. Right around the corner from our poop chute.

Thanks for nothing, Mother Nature.