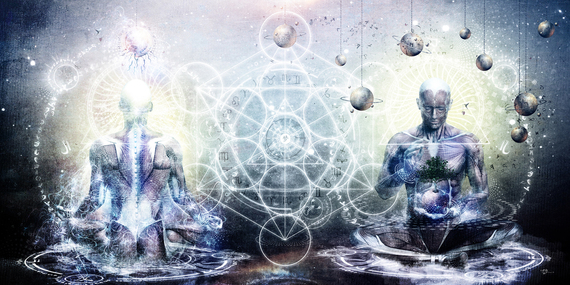 Artwork: Experience So Lucid-Discovery So Clear, By Cameron Gray

It's time for our people to rise up and take back our role as caretakers and stewards of the land." -- Eriel Deranger, Athabasca Chipewyan First Nations

What kind of world do we live in that a person like Robin Williams commits suicide?
We acknowledge a mental health condition, like so many others before him. But are we not acknowledging a deeper systemic malady?

How have we let our global narratives become so skewed, that some of the most vulnerable and sensitive among us are suffering so much? Where are the narratives that support the role of the empathic, and champion them in their work?

In previous posts we looked at the hero's journey and suggested that:

Before we unleash the collective journey, lets dive deeper into two archetypes that might appear in these evolved narratives. To truly comprehend the structure of the collective there needs to be an understanding that these narratives are not singular organisms but a collective of partnerships, where each participant plays a significant role.

Swiss psychiatrist and psychotherapist Carl Jung, was one of the first to popularize concept of archetypes. He saw them as a dynamic substructure of all human subconscious. Archetypes appear in all narrative forms throughout history, and come in a diverse and deeply resonant variety of traits. The ones I'd like to discuss are not new ones - and are an attempt to offer a new vision to an old paradigm.

The Steward and the Champion!

For millennia there was an old patronage model that bound the artist/scientist to the patron/champion.

The patron-scientist/artist partnership was in actuality, an imbalanced one--rich people, increasing their own reputation in society, benefitting from the fruits of the scientists' and artists' labors. It was a relationship based on need, rather than collective empowerment. In traditional narratives this could be akin to the mentor-hero partnership, or hero-sidekick, a partnership where one has significantly more knowledge and/or power than the other. Forwarding these narratives, the sidekick is portrayed as either "the buddy" or be like the character of "Midge"--the non-romantic feminine character in Hitchcock's Vertigo--who takes care of the main character, at the expense of her own needs.

This is not a collective journey but signifier of the linear hero-savior modality.

The Steward's role in old times, and new, was traditionally a caretaker of the land or property. In old narratives the Steward-Shepherd was the biblical hero/savior. I'd like to offer an evolution and emergence of that role.

How might we define these new versions of the Champion and the Steward?

The Champion:
These champions are seldom portrayed in popular media, and if ever, only as masculine characters. One champion that sticks out is Aragorn from Lord of the Rings. His character, especially as portrayed in Peter Jackson's film adaptation, is the all-inclusive champion.
The Steward:

On the whole, Stewards are seldom championed, and often fall into darkness and despair, to the extent of hurting themselves and others. They tend to be empaths, so highly sensitive, it may seem they carry the weight of the world upon their shoulders, like Atlas the Titan.

Having a Champion who supports, protects, and promotes the Steward at their work, is an incredibly powerful partnership. They activate one another, which in turn empowers their community as a whole.

As more evidence to the brilliance of J.R.R. Tolkien and the Lord of the Rings we can look at the partnership between Frodo and Sam as one of a Champion and Steward in the microcosm, even as Aragorn and Gandalf are Champion and Steward of the macro. This mirror of the internal and external comes together to disperse the darkness and give rise to a unified and triumphant collective. 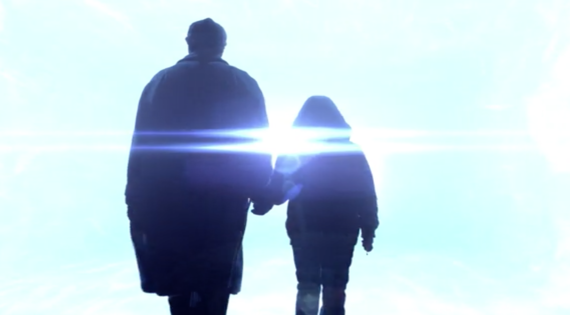 In even more classic tales, like Mark Twain's, The Adventures of Huckleberry Finn, we can find and interesting relationship between "Huck" Finn and Jim who both assume the roles of Steward and Champion on their journey. In the book, The NeverEnding Story, which became a popular film in the 1980s, the two main characters, Bastian and Atreyu play a very distinct role of Steward-Empath and Champion. Other mainstream media characters can be found in Dr. Walter Bishop, the mad scientist, in JJ Abrahams Sci-Fi series, Fringe with both characters, Elizabeth Dunham and Peter Bishop as his Champions and Stewards, playing an interesting game of archetype swapping. The series ends with an actual empath, who becomes the Steward of a better timeline.

In the Wachowskis adaption of David Mitchell's science fiction novel, Cloud Atlas, the idealistic character of Hae-Joo-Chang of the Dystopian New Seoul timeline, serves as the Champion to the empathic, enlightened innocent in the android, Sonmi-451:

"To be is to be perceived. And so to know thyself is only possible through the eyes of the other. The nature of our immortal lives is in the consequences of our words and deeds that go on apportioning themselves throughout all time. " 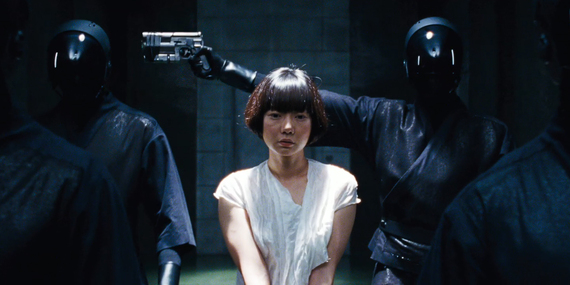 The Champion and Stewards journeys might have similar steps to the hero's journey, but these can now be nonlinear, collaborative journeys.

A truly, empowered partnership like this one can thrive when both the Steward and Champion are self-actualized. And yet, we don't find too many of these empowered roles out there in media and narratives. Most times empaths appear as broken, and with no champion to support them, they are alone and suffering. Self-actualization is a dynamic model which current popular narratives have made simplistic or static.

Self-actualization appeared in Abraham Maslow's hierarchy of needs, in his 1943 paper "A Theory of Human Motivation" in Psychological Review.

In that theory he argued that humans have stages of psychological growth in accord with the levels of need being met from the surroundings. Though Maslow never described his model as a pyramid, this has become the de-facto way to describe it. Maslow talked about the "metamotivation," the motivation that takes people beyond their basic needs in search of constant betterment. This can be considered a driving force for both the Champion and Steward in the collective journey.

By viewing internal growth as a finite process, we stunt a more evolved and emerging narrative. However, a number of more recent psychological and integral theories, exemplified by Clare Grave's "The Emergent Cyclical Levels of Existence Theory" (ECLET) and Chris Cowan and Don Beck's Spiral Dynamics: Mastering Values, Leadership, and Change suggest that our psychological evolution is a non-linear, never-ending journey of ups and downs. The more we use these coping mechanisms to continue stimulating the way we interact with our external world, the more we are able to see all of our relations to people, nature and the planet as a whole, interdependent ecosystem. 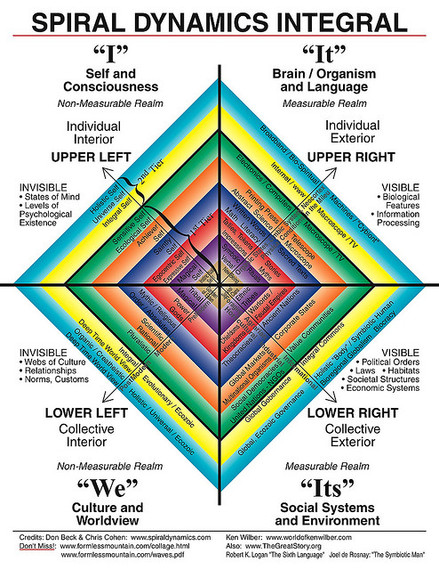 Thus, the Champion and Steward's partnership provides an entry point to narrative that perhaps better examines how a collective might approach a challenge. Their concern for and membership in a group, allows them to grow and evolve within the construct of a community, rather than as lone protagonists.

The celebration of empaths as protagonists has not been very popular. But it is the empath, who gives us story, who thinks differently. In this vein, Robin Williams again comes to mind as the ultimate sensitive, the boy who didn't want to grow up. Would his experience of the world be different if the Empath-Steward was celebrated and empowered by the Champion? By the whole world?

The reason that empaths hurt is because their potential Champions are broken. Champions, after all, have been stuck in the hero-warrior narrative for centuries, leaving Stewards in the narrative's back seat. Moving forward, storytellers must shift perceptions around Stewards, reminding us that Champions are here to support them. Storytellers must recognize that the new Steward/Champion dynamic will become a potent component in contemporary storytelling.

In a world preoccupied with stereotypes, narratives like this need to be all-encompassing, engaging and immersive. What is stopping us from collaborating on solutions for the biggest global challenges are not the actual solutions, but our relationships with each other. Our stories do not encompass all of us, they don't welcome and empower all genders, ethnicities, and species. We are bickering amongst ourselves, while forests are burning, people are starving, species dying, and ecosystems collapsing.

What we need are stories to help us evolve quickly, maintaining a new model for the stories we need to tell. Without positive and inspiring visions for our future we are left with either unattainable utopian worlds or catastrophic dystopias. These may be entertaining, but they perpetuate traditional and outmoded notions that are no longer serving us.

How do we create narratives that are both more inclusive, and shift emphasis to from the warrior to the empath? Narratives that empower the group, but hold space for the individual? It's time for the collective journey!

I'd like to thank the brilliant Jeff Gomez and Joe Brewer for championing and stewarding me through writing and editing these articles.
Follow them:
@Jeff_Gomez
@cognitivepolicy