“Ex Machina,” the sci-fi directorial debut of writer Alex Garland, is lonely, gorgeous and mind-twisting. It’s one of the most thought-provoking movies I’ve seen this year, brilliantly skewering our current technological conundrums. And it’s set in what has become my new favorite setting for science fiction: the near-future.

However, like a lot of other sci-fi movies, it has some serious problems with how it presents our gendered future. Namely: all of the humans we meet in "Ex Machina" are men, and all of the robots appear as women. In a movie like this, it’s easy to be aggravated at the further feminization of technology.

Ava, the robot star of the film, and one of only four characters in this “one-room” thriller, could easily be seen as another addition to the list of subservient bots in the tradition of Siri and Samantha -- a machine that exists to tend to man’s every need, and read him driving directions without challenging his masculinity. But if you push past the frustration, "Ex Machina" brings to the fore the idea that technology is as imperfect as its creators, and its mirror can provide a useful reflection. (Warning: spoilers ahead.)

At the film’s outset, Caleb, a programmer at the world’s largest Internet search company, wins a trip to spend a week with his reclusive boss Nathan at a location that can only be reached by helicopter. As Caleb drudges through the wilderness, we recognize early that he is unprepared for what lies ahead.

Nathan, played brilliantly by Oscar Isaac, is a spectacular asshole. If the beard has become the newest measure of masculine hubris, then Nathan’s beard was perfectly cast. He is charming, casual in his entitlement, and trapped in his own perfect mind, which he takes leave of via bottles of clear liquor every evening. After requiring Caleb to sign a long non-disclosure agreement, his prize is revealed: Caleb will be spending time with Nathan’s latest invention, a robot named Ava, in an effort to determine if she passes for human.

Ava is a thing of beauty, a literal objectification of the female form. Alicia Vikander imbues her with a grace and uncanny perfection as only a dancer could. She is flawless. (Is it overly Freudian to say that Nathan building Ava is a vain attempt to achieve the distinctly feminine power of gestation and birth? Maybe, but I’m also hard pressed to think of an example where a female lead in a movie suffers from a similar god complex.) 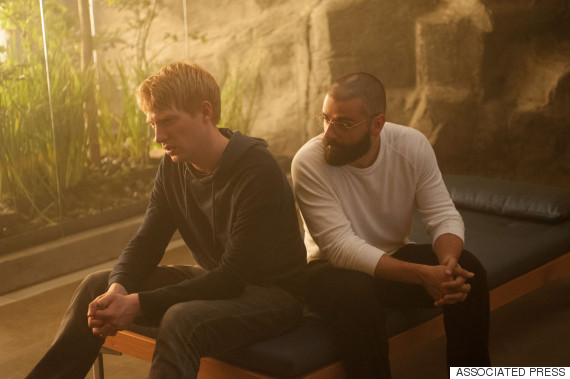 In this image released by A24 Films, Domhnall Gleeson, left, and Oscar Isaac appear in a scene from "Ex Machina." (AP Photo/A24 Films)

If the pristine interiors of cement and sliding glass in Nathan’s hideaway are the cold, elitist logic he hopes to impose on his experiment, the lush greenery of Norway enfolding the fortress is the free, experiential world. "Ex Machina" asks us if experiential knowledge is essential to consciousness and it seems to answer yes: you need to have a body in order to be human.

The central question Nathan is tasked with answering -- can a machine exhibit the intelligence indistinguishable from that of a human? -- is also the question underlying the Turing Test, the decades-long challenge that asks human judges to guess whether a typed set of responses to their questions is coming from a human or a computer program.

Gender is a crucial component of the Turing Test. Last summer, when a program named “Eugene Goostman” “passed” the test, it did so, in part, by presenting as a 13-year-old Ukranian boy. That gender gave judges a certain set of expectations, and allowed “Eugene” to perform a convincing imitation of a human. Without a gender programmed into his AI, there’s no way any judge would be fooled.

When remarking on Ava’s gender at an "Ex Machina" screening in San Francisco, Garland made a point of saying that Ava is “female-presenting,” not simply female. While the body given to her in the movie was female, he rejected the idea that Ava’s operating system had an inherent sex.

But that explanation is only half-convincing. After all, when an OS or a brain experiences the world through a certain body, it gets different feedback depending on which gender it expresses. That feedback, in turn, helps direct the course of its future interactions. This, in a nutshell, is the reality of intersectional feminism: it’s not enough to say that all brains are equal when bodies experience gender, race and class differently. And these gender experiences complicate even the most pristine of cyborgs. Maybe Ava longs for more than just escaping the building, maybe she’s hoping to escape her assigned body.

If “Her” was about our ability to love beyond the confines of bodies, "Ex Machina" is about the cruelties between bodies. Nathan playing god, Ava’s confinement, and poor, mute, Kyoko (who, in the world of "Blade Runner," would be a “basic pleasure model”) are all examples of the chilling world "Ex Machina" paints -- a world devoid of empathy. I’m not sure if this is a spoiler alert or more of a trigger warning, but this movie shows a literal closet of female bodies in various states of dismemberment. Sure, they might ultimately be robot bodies, but looking at them is nonetheless disturbing, a potent visual of the violence inherent in the objectification of female bodies. But these reactions are answers to the question Garland is asking his audience: what elicits our humanity? Bodies are essential to empathy, a lesson easily learned by logging into any dark corner of the internet where harassment prevails. That lack of accountability we experience while "disembodied" online is a problem when we consider how to build intelligence.

"Ex Machina" is a very smart movie -- its characters quote Oppenheimer and discuss Pollock -- but it’s not immune to the everyday misogyny of our world. The robots of the near-future, when they arrive, will have access to the entirety of the Internet, all of its tropes, and all of its prejudices. The thought of an artificial intelligence built on our search histories is terrifying; and that terror is a lot of what makes "Ex Machina" such compelling viewing. The scene in which Ava stands in front of a closet full of doll parts selecting her own skin, is a deep meditation on our freedom of choice in the face of big data. If Ava is indeed a genderless machine, how would that choice be made? Given access to a more diverse set of parts, knowing all the prejudices that persist, would she still have chosen to present as female? It’s almost hard to imagine she wouldn’t have grabbed a dick on her way out into the world.