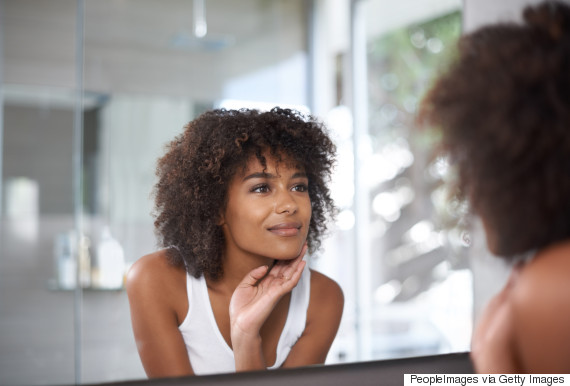 Allure conducted a national survey in the hopes of finding out just how much we judge ourselves and others, both in the real world and on social media. And we have learned it's officially time to cut ourselves some slack.

It's why Spanx has made a billion dollars, why politicians dye their hair, and why you're reading this magazine. But how much does it matter? And exactly how much does the average person factor in looks when sizing up herself and the people around her, both positively and downright bitchily? To find out, Allure conducted a national survey of 2,500 people (2,497, if you want to be that way) with one goal in mind: dig up deeper truths, search for the uncomfortable thoughts that lurk in the shadows, and make our subconscious squirm and change the subject. You know what we found out? We could all stand a big, cold drink of Relax Already! In one startling--and revealing--finding, 64 percent of people said that the first thing they notice about someone is how attractive he or she is. And half of us--that's every other person--think appearance defines us significantly or completely. Some of what we found proves that beauty has an ugly side. But the story doesn't end there. We also uncovered plenty of reasons to feel good and be hopeful about the state of humanity.

This Just In: Appearance Matters

In fact, it matters more than we like to admit and more today than in the past. Something happened in the last five years (Encyclopædia Britannica stopped having a print edition? Kate Middleton married Prince William? The proliferation of blame-them-for-everything Kardashians and social media?) that convinced a lot more of us that what we look like really matters. In an Allure survey conducted in 2010, 35 percent of people said they felt their appearance defined their identity. In 2015, that number jumped to 50 percent. So it makes sense that almost two thirds of people now said they work hard on their appearance.

Home in closer on this theme and here's what you find: 61 percent of men and women think their lives would be better if they were more attractive, 64 percent of people said their appearance has helped them get assistance from a stranger, and 62 percent said it has gotten them better service in a store. Almost half of the people we polled even believe that being better-looking would help them get a promotion. And to those 47 percent, we say: Huh? Are you guys all models?

Women in particular are absorbing this emphasis our society places on looks. Twenty-seven percent of women admitted they would rather receive the praise "You're beautiful" than "You did a great job" (17 percent), "You're so smart" (15 percent), or "You're so funny" (8 percent).

Attention All Women Everywhere: Go Easy on Yourselves!

It may be the fairer sex, but it's also the self-critical one. Sixty-two percent of women said they're more critical of their looks than other people are of theirs, compared with 53 percent of men.

Only 59 percent of women are comfortable with their appearance, while a whopping 74 percent of men are. On average, women rated themselves a 5.93 on a 1 to 10 scale of general hotness, while the seemingly more confident sex said they're a solid 6.54. We could all stand to take a page from the self-accepting men around us--they're less likely than women to lie about their weight or jeans size. Then again, they're more likely to lie about how much they drink or how much money they make.

Related: Find the Best Haircut for Your Face Shape

Why So Harsh, Millennials?

People born between 1981 and 1997 are the most likely to give, receive, and bandy about criticism like it's a new Key & Peele video. It's basically--and we're sorry, but this is going to hurt a little--the mean-girl generation. Forty-one percent of millennials have felt better about themselves because someone else looked bad. (Only 28 percent of Generation X and 20 percent of baby boomers have that particular brand of schadenfreude.)

Like almost all of the younger generations before them, they seem to think they will live forever. Nearly one third of them will do something unhealthy--smoke, tan, crash diet--if they think it will make them look better, while just 23 percent of Generation Xers and 16 percent of baby boomers will. But millennials must be doing something right because they're feeling pretty confident in their mojo. Forty percent think of themselves as the most attractive person in the room (only 22 percent of boomers say that).

We Judge, Even If We Try Not To

On one hand, being judgmental is part of being human. On the other hand--wow!--have we made it into an art form. A whopping 80 percent of people said everyone judges other people's looks. But the good news is that even more of us (84 percent) are trying to be less judgmental (thanks, guys!).

Seventy-six percent of people in our survey said they accept their flaws. But demonstrating how deeply complicated this issue is, 81 percent said they'd like to be happier with the way they look. And why are we all so hard on ourselves? When ranking our own attractiveness, we are harsher on ourselves than we think other people are. People think their significant other is the most accepting of their appearance, followed by their close female friends and, aw, their mom. The person who gives us the most cutting criticism? Our very own selves. If you remember nothing else, remember this: We could all use one giant group hug.

Weight Is More Than a Number

It may not be a shocker to learn that being overweight is stigmatized in our culture. But we were floored--and not in a good way--to find out just how much. Fifty-eight percent of women and 63 percent of men said that when they meet an overweight person, weight is the first thing they notice. When asked what topic they lie about the most, to themselves or to others, people said their weight tops the list. Jeans size is up there, too, ahead of salary, height, age, job title, and SAT score--although 17 percent have lied about that last one!

Communication has been evolving since we courted each other in grunts. But in the era of social media, that evolution has been expedited times 10 zillion. We pass judgment in nanoseconds. The majority of social-media users post only positive comments, though men are more comfortable being negative. A quick aside to millennials: How do you hold down a job? We all take selfies, but for you guys it's a few-times-a-week occurrence. And 52 percent of you use a filter. But you probably didn't read that because you're busy seeing how you look in Amaro.

Anytime you delve into the human condition and ask uncomfortable questions, you get uncomfortable answers. But if this judginess has taught us anything, it's this: We need to lighten up. We are our own worst critics--and we can be our own strongest supporters. And one more thing: It's time to come clean about those SAT scores.

The 10 Best Drugstore Mascaras Under $20

20 Celebrities Who Look Surprisingly Different Without Their Signature Looks

The 6 Prettiest Haircuts for Long Hair

Related: How To Organize Your Closet In 12 Easy Steps