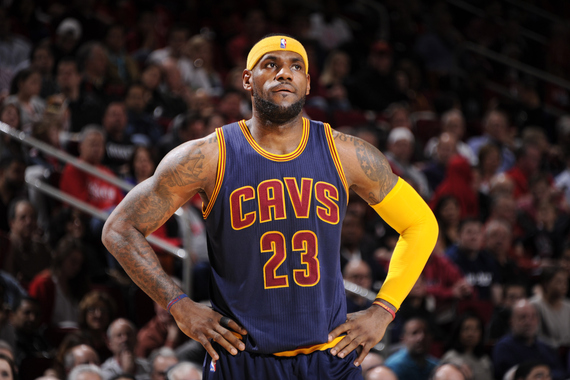 LeBron James is back in Cleveland. You can put your photoshopped pictures of him in your favorite team's jersey in your trash folder. It was pretty much a done deal that he would return to Cleveland even after he opted out.

He signed a two-year deal with a second year player option, giving him a chance to yet again opt out. The deal is a reported to be worth close to $47 million.

From a financial perspective, it would not be wise for LeBron to take a four or five year deal as he would be leaving millions on the table in the future. As the best player in the world, James is afforded the opportunity to sign one or two year deals that give him a chance to maximize the amount of money he can earn.

Rather than signing a long term four or five year deal, James can become a free agent when the NBA Salary Cap is expected to reach a projected and insane 108 million.

But, what if the salary cap wasn't expected to rise? Would LeBron's method of short-term deal madness be the same? And while "what ifs" can't give us any concrete answer, let's just examine another possible piece of LeBron's thought process in his two consecutive mini-deals: uncertainty.

James' new deal undoubtably gives him more leverage than any player in the league due to who he is; he's a franchise changer. But I just think LeBron has an insatiable desire to be in control of more than his financial future in the NBA. You can never have enough money, but James definitely isn't hurting for any. He wants his superstar money, of course, but rings are much more important; something he doesn't think he has enough of. After all, he had dreams of winning an insane amount of championships in Miami.

These deals are geared towards getting him whatever he wants.

After putting on arguably the greatest Finals performance in NBA history, it still wasn't enough to overcome the Golden State Warriors; James admitted somberly that he needed help -- he gave all he could give. He was without his two All-Star teammates and others could not pick up enough slack.

While the chances of LeBron suiting up for another team seems blasphemous, his short term deals speak of the aforementioned financial potential as well as him being a forward thinking guy; it speaks possible rockiness in the future. A lot can change over the course of a season or even a single playoff series.

Before he inked his new deal, James reportedly said he would not re-up until the Cavs made other moves and took care of in-house issues.

Rightfully so, the Cavaliers have been here for most of James' team desires. They listened and began to surround him with guys he probably advised they should acquire and retain. As a result, one of James' favorite guys, Tristan Thompson will be paid handsomely and Kevin Love became a new member of the 100 million dollar club. More recently, the Cavs signed his point guard from his previous stint in Cleveland, Mo Williams. Those are the perks of being LeBron James.

He wants a win-now roster. But, who doesn't?

His desire to be a focal point and seemingly go-to guy when it comes to roster decisions will never disappear, but I personally feel as though the Cavaliers willingness to pay a record number in luxury taxes wouldn't be as strong if he agreed to a long-term, nine-figure deal -- although owner Dan Gilbert could careless about paying them especially if it means it will get him closer to a championship.

If the Cavaliers fail to provide James with a good enough roster or if injuries became the reason they fail to reach the mountain top for another season, James has granted himself a chance to leave if he so chose to.

Although that would probably call for another chapter of "The Decision" and more burned number 23 jerseys, LeBron James has proved that he will do whatever he feels is best for his career regardless of public opinion; he'll play where he thinks gives him the best shot to hoist a third Larry O'Brien NBA Finals trophy. This is his career and his only.

A long-term deal for anyone provides a great deal of uncertainty.

A short-term deal provides guys like LeBron James, a superstar with the ability to make his respective team feel compelled to continue to help him, help them gives the franchise a level of uncertainty. The Cavaliers would hate to see James leave again, I'm convinced they'll go to the ends of the earth to keep him in Cleveland. The amount of leverage on both ends of the spectrum is ridiculous.

The Cavaliers will more than likely be willing to possibly make LeBron James the first 200 million dollar guy in the NBA in the summer of 2017. They also have to keep in mind that his championship chances in terms of a win-now acquiring and maintaining a seemingly "win-now" roster on a year-to-year basis is just as important. The only way to do that is to keep Gilbert and co. on their toes.

James is masterfully doing both thanks to his lucrative, smart and powerful short-term deals.