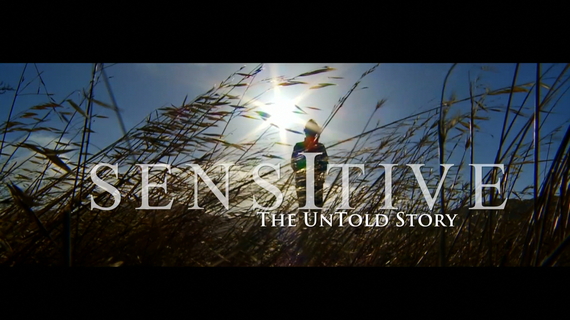 Do you cry easily? Do you often get accused of over-reacting or being too sensitive? Do you have a high degree of empathy? Do you find that good and bad things affect you more deeply than those around you? You might be one of the 20 percent of the population who are highly sensitive individuals, an often misunderstood physiological trait examined in depth through the new documentary Sensitive: The Untold Story.

Sensitive: The Untold Story is the first ever documentary on the trait of high sensitivity -- a phenomenon identified by psychologist Dr. Elaine Aron in the 1990s -- and it opened to a full house at San Francisco's Legion of Honor theater on September 10, 2015, featuring a live stream in which people from 50 countries around the world also attended, including myself from Florida. For full disclosure, I was one of the 1300 people who contributed towards the Sensitive Kickstarter campaign; I identify as a highly sensitive person and Dr. Elaine Aron's previous work has impacted my life enormously.

As I learned in Sensitive, while Dr. Aron was venturing into her studies on high sensitivity in adults during the 1990s, at the same time other researchers Dr. Jay Belsky and Dr. Stephen J. Suomi were examining the same trait in children and rhesus monkeys respectively, with similar findings that a portion of the population does in fact experience the world in a different and more intense way than the majority, and this serves as a survival function for all. Because highly sensitive individuals are able to respond to slight and often unseen changes in their environment, they are able to operate as an early warning system for the rest of the herd if their input is valued in concrete ways.

Interestingly, research presented in the film found that roughly 30% of the highly sensitive community are extroverts, and the trait of high sensitivity manifests in equal measure in males and females. Unfortunately for many highly sensitive people -- and especially ones who live in cultures in which sensitivity is not considered a positive trait, for males in particular -- often the perspectives and behaviors of the highly sensitive can be misunderstood or misdiagnosed as shyness, introversion, autism, Asperger's, or even social phobias because of a lack of general information on this personality trait.

In Sensitive: The Untold Story Dr. Aron breaks down the four major traits of a highly sensitive individual into the acronym DOES: depth of processing, overstimulation, empathy and emotional responsiveness, and sensitivity to subtleties.

As Dr. Aron and many other researchers interviewed in the documentary have found through magnetic imaging and neurological and physiological testing, the highly sensitive do in fact physically process the world differently. Because of their higher than average depth of processing Dr. Aron says, "Labels of fearfulness and shyness are applied to sensitive people even when they don't apply." The person isn't shy or socially phobic, they are reviewing situations from a distance, absorbing and analyzing a plethora of social and other information in their own time.

Because of this above-average depth of processing, the highly sensitive person is easily overstimulated -- aka overwhelmed -- by events going on around them, and especially chaotic, loud, or crowded situations. The highly sensitive require a great deal of downtime in order to decompress after overstimulation.

Dr. Bianca Acevedo and many others have performed studies on the brains of highly sensitive individuals which showed that empathy and emotional responsiveness are heightened. The highly sensitive show more brain activity in the insula -- also known as the brain's seat of consciousness, which helps integrate an individual's inner and outer experiences into usable data for survival. The highly sensitive are easier to cry than others because they are emotionally tending to everything around them in a deeper way, which is not a bad thing. Dr Aron notes, "Emotions generally lead to better thinking, because we only think thoroughly about something we care about."

Sensitive: The Untold Story features a number of insightful interviews with a variety of researchers in the United States and Europe who are in the midst of new studies on the trait, such as Dr. Michael Pluess, whose research on "differential susceptibility" and "environmental susceptibility" has particular resonance for highly sensitive individuals. Both differential and environmental susceptibility demonstrate how some individuals are more affected by positive and negative stimuli and environments than others. In the case of a highly sensitive person, they respond particularly strongly and beneficially to positive experiences to a greater degree than the non-highly sensitive. However, the reverse is also true: highly sensitive individuals who had "adverse childhoods" will undoubtedly experience that negativity more strongly and it has a far greater potential to ripple out into adulthood as depression, anxiety, addiction, and more as noted by Dr. Tracy Cooper, Dr. Pluess, and Dr. Aron.

Dr. Aron and many other researchers' work have found that a majority of highly sensitive individuals suffered from these adverse childhoods -- often times because their trait of high sensitivity was misunderstood by family and others -- which often left them ill-equipped to deal with their trait in a functional way. This is why research on high sensitivity is so important at this juncture: so that a new generation of the highly sensitive can be understood and nurtured to become particularly highly functional adults who are able to manage what some now consider the gift of high sensitivity.

Through more than a dozen interviews with a variety of researchers, Sensitive: The Untold Story makes a strong case outlining the physical, physiological, neurological, and emotional differences between the 20% of the highly sensitive population and the 80% who are not.

However, where the documentary gets into trouble is in some of its narrative features, and this might undermine the important strides the film makes in legitimizing awareness of the trait of high sensitivity. For example, there are several poorly written and awkwardly acted reenactments of typical scenes a highly sensitive individual might go through, but because of the forced performances and stilted writing these end up detracting and distracting from the solid science behind the highly sensitive personality.

Also, as a highly sensitive woman of color myself, I found it troubling that only two highly sensitive people of color were interviewed. For social and cultural researchers, it is highly problematic to give an impression that this is a "white" trait when it is not. And while there is an international component to the research on high sensitivity, the chosen interviewees once again reflected only a white eurocentric perspective. Seeing that the director of the film, Will Harper, is himself a person of color and identifies as highly sensitive, it's surprising there isn't more diverse ethnic and racial representation in the film.

There is also a level of cultural erasure and false universality that occurs in montages of unspecified African and Southeast Asian children who appear with no explanation as to their presence in the documentary, nor any further identifying information as to the specificity of from where these children are from or why they are being shown.

Because high sensitivity is such a misunderstood trait and so many highly sensitive people survive adverse childhoods because of being considered different, crazy, or with some pathological fundamental flaw, it's unfortunate that there are these narrative problems in the first documentary ever made about highly sensitive individuals. To some, and especially to skeptics, these issues could severely impair or even discredit how this film is received by the greater public and by the 80% who are not highly sensitive. In the cases of the reenactments and the footage montages these narrative tricks were wholly unnecessary to the documentary's focus and could have been edited out without affecting the concrete scientific evidence.

In an interview in the film highly sensitive person Alanis Morrissette says, "I spent most of my life thinking that how I was was a problem for people." I certainly relate to that sentiment. And Dr. Aron, herself a highly sensitive person, reveals, "I think I went into clinical psychology because I didn't know what was the matter with me."

"Often it is the sensitive people in our culture who are the pioneers, who are the oracles, who see into the future, and see what's coming, and we don't give them enough credit and as guides to us, but instead demean them because they're different than we are," says Dr. Gary Linker.

For those of us with adverse childhoods who spent most of our lives thinking there was something wrong with us, Dr. Aron suggests reframing our experiences. To this point one of the highly sensitive interviewees Dani Korsh says, "I view my sensitivity more as a superpower rather than something that's a defect about me."

Dr. Aron closes Sensitive: The Untold Story with the inspiring words: "To the highly sensitive, I beg you, speak out. You now know you're in good company. We can support each other. You are not the only one."

I spent most of my own life believing there was something wrong with me because of my hyper-sensitivity. Its narrative problems aside, Sensitive is a remarkable and important peek inside the brains, physiology, and emotions of the highly sensitive. I hope this is the first of many films on the topic, and that it will help the up-and-coming generation of highly sensitive individuals and their families better understand and nurture this unique way of being human.