At first it's an eensy bit daunting - speaking with the daughter of a living legend - but it's been my good fortune to converse with J.C. Lee's dad a few times, so I know that behind the magnificent myth there's a mortal man, albeit no ordinary man: Stan the Man! (Yep, that'd be the fellow who developed a shed of huge Marvel characters, and plenty more.) This chat quickly becomes supercharged, as Stan Lee's daughter, J.C. - whom the venerable scribe dubs his greatest creation -- leaps forth with two new projects: a playable app called "Raising My SuperKids"; and It's All About Love: The Stan Lee Family, her photo book which practically defines the term "labor of love." Fine timing, for Valentine's Day. 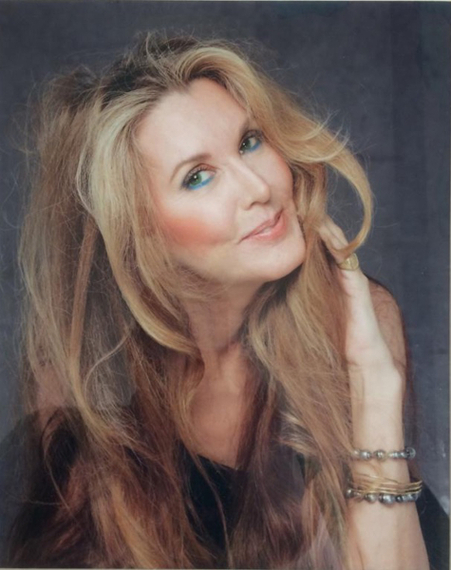 The conversation ranges widely - from gardening to songwriting to Liz Taylor's passions to Steven Spielberg meeting Stan Lee (the director likened their creative methods, despite different mediums). Specifically regarding the SuperKids app - which in addition to being cheerfully diverting will be helping to fund charities for education and literacy - Ms. Lee waxes at once humble and knowing. She defers to her partners, Becky Wanta and Alain Nguyen of Social Media Applications - creators of the game for which she's serving as ambassador - then offers:

"They figure, well, if the super-king of comics' greatest creation is me, I gotta be a 'Super Kid.' So they approached me just thinking: 'Stan Lee's Greatest Creation / Super Kid.' And also I'm someone who cares about people, and this is a positive, encouraging kind of app, with which people can feel good about themselves, and work on what they want to work on - making them a stronger, better individual, through something that's colorful and fun.

"Comics have always been such a great tool, because they don't put people off. They're easy, they're inviting, they're available for all, and so it's easy to get messages across that way. With these sweet little characters, and this situation where you can raise the child from birth, you can figure out what its talent is, and make it happen, and present it to the world. It's a nice thing for children to do. It's a nice thing the parents could do with the children. It is exciting." 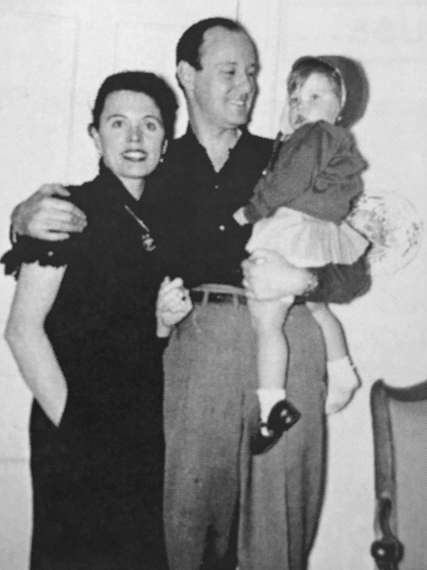 "I never thought I was sort of 'born' - I thought I fell out of one of the ink bottles of the Marvel - which was then Timely (Comics) - office. And I've never veered. It runs through my blood, and what they're presenting with the Super Kids, I think other people can feel it, and it can be very exciting for them. And it can put them in this new venue of creativity and color, and excitement, and nothing that's negative or evil or nasty. Just everything that's uplifting."

You can also contemplate Ms. Lee's origins via "The Mirror" - a short film/webisode she considers a promising work in progress.

Ink bottle or no, Ms. Lee is every bit as proud of her mother, Joan Lee, and considers the book It's All About Love: The Stan Lee Family to be a tribute to both her parents' love, a marriage of 67 years and running!

"My mother has always loved jewelry. And she's an incredibly-talented, vivacious woman, and she's out-of-the-box: if I go to Chanel with her now, she will choose the hippest-hoppest thing. And I'm like, 'Mom!' She's a really hot, interesting, talented woman. She's great. She's a writer as well: she wrote a book called The Pleasure Palace, and it was sold in 30 countries. And only because Judith Krantz wrote a book, and they were having dinner, and [Joan] thought, 'that would be interesting' - so she's really something else. And now, she has another three books that aren't published, that are sitting in her house."

Her mother does? That's pretty cool.

"Yes," J.C. confirms. "Three unpublished books, finished. My mother is so out-of-the-box and talented - I know she doesn't like when I continue about her, but I have two incredibly talented parents - and part of my joy has been watching them. And just being this, you know, it's like watching a love story. It's been such a joy. And I've gone into the world, and I've traveled, and I've done my art, but I'll tell you: I've never found anything better than my parents - and their talent and genius, and their love story. And their attitude: who they are, and how they think. 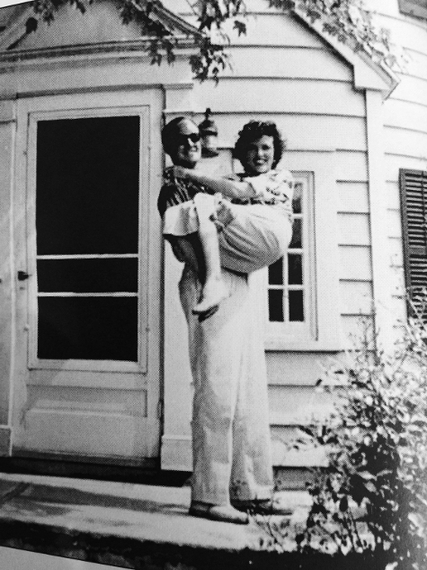 With Great Power: The Everlovin' Lees

The talent (and perhaps a touch of alliteration) runs in the family: Ms. Lee deftly designs, prolifically paints, sonorously sings (this J.C. has a tune about "Little Baby Jesus" she'd like you to hear), plus only this week she's completed a massive outline for her own new prose work. I gently guide us back to the photo book (which will be available in a limited edition, signed by the three Lees), and ask how this sentimental journey came to be.

"I love books," Ms. Lee explains, "and when I worked for Marvel Comics, I did layout, paste-ups, I did many positions there. I wish I could have done this book with me doing the layout, the paste-ups -- it was quite difficult. I must have been on this book for three years now. I just had all these pictures of my parents, and frankly I'm ready to start the second book. And take it up a notch.

"It's really done with just love, and it's really like just sharing something private. At first everyone was like, 'What are you doing?' And my mother said she thought it had passion, and she thought it was delightful. It's nice to see something a little organic, that's done with love and all that good stuff we artists like."

It's easy to concur.

"We're a family of artists, Gregory, and I'm the only child. And it's always been, to us, about beauty and passion and work. We're just a family of love. And when I looked to the photos, I thought, 'Gosh, you know, where are the vacations?' My father loves to work. And I love to be home and paint, and design, and write, and do all the things I love. And even in the photo book, all the dogs - we've been doing the dog thing forever. And dressing them. My mother used to dye her poodle to match her dress. I have four dogs. And we live very private, wonderful, blessed lives.

"But I just thought, at this point in time, that it would be a nice - almost a greeting card for my parents. Just a little sort of thank-you, and sharing it with everyone: a nice little love note to a love story."

I note that launching the book this week is very good timing - it's almost a Valentine.

Yeah. You know, that's the way we can view it. It's a Valentine for them, and to be shared by others who love them."

I bring up the footage of the happy couple in the marvelous documentary, With Great Power: The Stan Lee Story, and what a treat it is.

"Well, my father," J.C. laughs, "I don't think he could do bad footage. I mean, my father's really a showman. He studied acting. He needed to support a family, and he always was with the written word: he can recite anything by Shakespeare, by Rudyard Kipling, I mean, he's really a man of the word. He's a good man. He's a hard, hard worker. Neither of these people are kidding around." 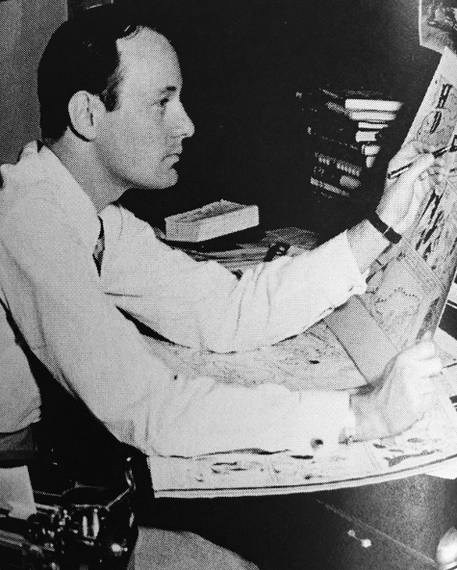 Workin' Man: Stan Gets Down to Business

When I mention the esteemed Mr. Lee quoting the lesser-known lines of Julius Caesar's Brutus to me, J.C. gushes:

"That's what I'm saying! So you absolutely understand him. Obviously, Gregory, you write for a really strong paper, and a really quite brilliant woman - from the things I've read and seen of her - and you nailed it: the man is a man of the word. He loves it. And he loves music: he loves singing, he loves the lyrics, he loves the poetry. He wrote songs when he was young. He's a wonderful man. We're very lucky to have him. I hope we have him another hundred years." 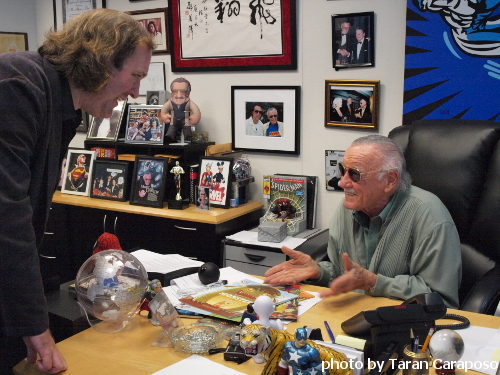 Men of Words: Stan Enthuses, As Is His Wont

Hear-hear. But I'm curious - kids are kids; dads are dads. Was there a defining moment for J.C., when she suddenly realized that her dad was a master storyteller summoning, y'know, global adoration?

"I never thought he wasn't. Nothing to me is a surprise or a shock - I didn't say, 'Oh, my dad is famous!' Or, 'Oh, Spider-Man is great!' Or, 'Oh, my father knows words!' It always was what it was for me, from the start. He had the same typewriter, and the same world.

"I've had several houses," she continues. "My parents have the same house. My father could have the finest desk. No. It's not about that. It's about the art, and the work, and just love and being alive and real. It's not about 'moving up.' It was a family about love and beauty. My mother, as I say, it's all about beauty, and passion. We're all visual, visual people. My father has always walked in and seen the most beautiful woman there is, and the most beautiful home, and the most beautiful-smelling room - my mother never didn't have potpourri and candles. My mother's on top of the game, and has given him a wonderful life, and has given me a wonderful life. She's a real talented, creative woman who loves her home. So, you know, it always was what it was - it never switched or changed, or, I didn't think that he was better or not.

J.C., reflecting on the living-legend status, adds: "I think now is interesting, because now he's so much the world's. And now he's so huge. Now it's another feeling. But I mean, other than that: they made one story, two stories - they made one movie, they made five movies. I didn't not expect it.

"We were always a family of love and togetherness, who were on this journey. My mother was always, 'I'm Mrs. Stan Lee.' And I was always the proudest - I always knew who he was. I still know who he is. It's a great honor."