When keeping journals there becomes a place where irony and life's absurdities can gather, where momentary glances at something sad, blurred or treasured out of a car window or a shadow of a thought held from the hard light of day can be scrawled down or deliberately caught in the move of a pen - the color sometimes chosen carefully, sometimes done with what's at hand. 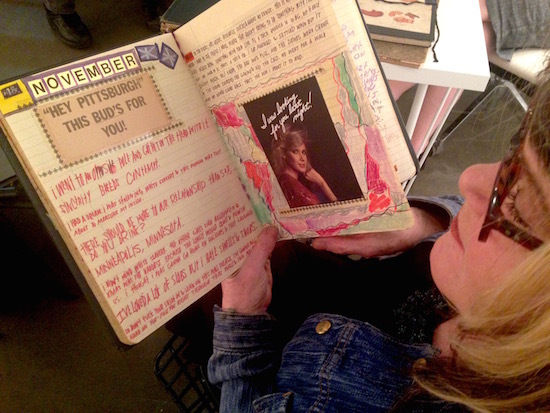 The Artist Flipping Through Her Journal, circa 1970s.
Courtesy the Artist and Sloan Projects

It's a place where things deep inside can live, reside, wait for the big reveal. This occurred recently at Sloan Projects in the journals and collages of Excene Cervenka, legendary punk rocker from the band X. It is her first solo show in 8 years, and the work in it shows she's been woodshedding, to coin a phrase from early blues musicians. The show is aptly named The Dust of Sunlight, and is composed of works done from 1974 to 2015. 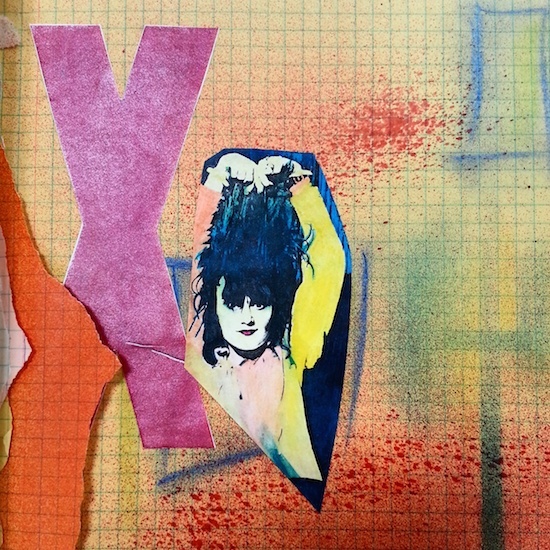 Detail from Excene Cervenka Journal, circa 1970s
Courtesy the Artist and Sloan Projects

Collages are often part of and a result of journals. These have become steeped in memory, and larger works in themselves in this small but powerful exhibition.

As such one will find bits and pieces, repetitions and assemblage from the old America mixed with the new. It's refreshing look at significant moments and chance discoveries from places in the recesses of the mind. Things forgotten and well remembered. The works are generously wry, unforgiving, and unflinching, both in their intentionally mixed messages and their compositions. Things pop out, but in a naturally punk kinda way. One could hope for nothing less. 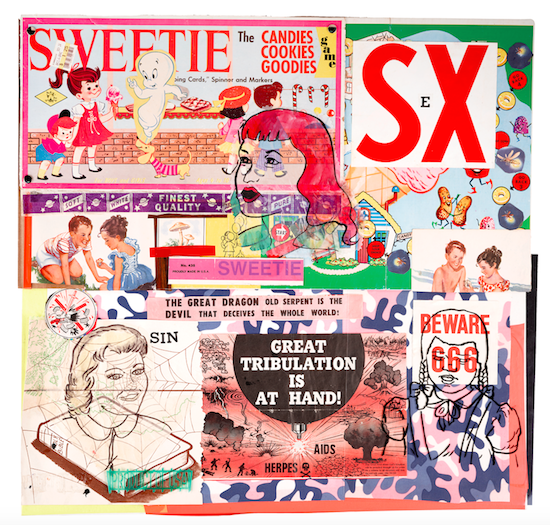 This is inline with Cervenka's life and work. As expertly curated by the equally renowned Kristine McKenna, one of the first mainstream journalists to profile the early LA punk scene, the show becomes a tapestry in and of itself, whether one moves one way or the other throughout the gallery. The journals are there too, opened to tantalizingly choice places. Mostly created as Cervenka traveled the U.S. as a touring musician, the journals offer a bittersweet glance at what musicologist Harry Smith referred to as 'the old weird America'. The pages of the four journals on view have been turned each day throughout the exhibition. 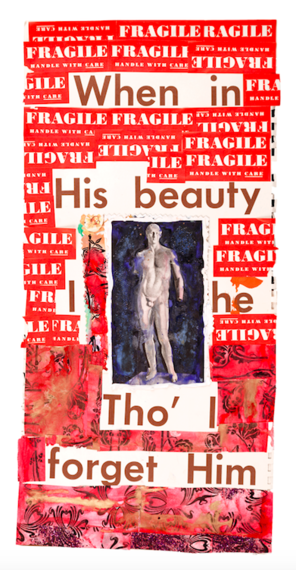 Born in Chicago, in 1956, Cervenka is a founding member of critically acclaimed band, X, and country quartet, the Knitters. She's released six albums as a solo musician, maintains a practice as a spoken word artist, and has published two volumes of poetry. Her artwork has been exhibited widely throughout southern California and New York, and is the subject of Magical Meteorite Songwriting Device, an artist's monograph published by Perceval Press in 2007; out of print for several years, the book recently went into a second printing by Perceval. Copies of the book as well as her catalogue America the Beautiful, will be available for purchase. The exhibition will be on view until July 8.