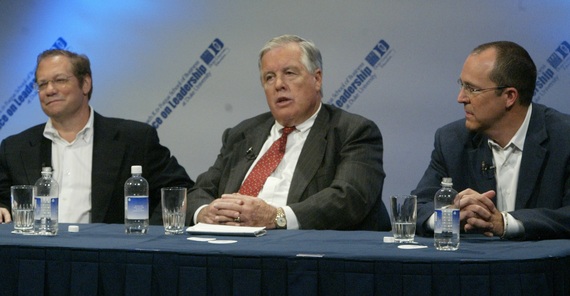 A few years ago, we invited Mike Heisley to share his thoughts in a panel on Building Something from Nothing at a Fuqua/Coach K Center on Leadership & Ethics Center (COLE) conference at Duke University.

Mike was a natural fit for this panel. The son of a train operator, he emerged from a blue collar background to become a billionaire, owner of the Memphis Grizzlies, and patron of St. Jude's Children's Hospital, among countless other remarkable accomplishments. He was someone who embodied the traditional definition of success.

Mike told us a story. Early in his career, after many failed deals and with deep personal investment, he finally had a breakthrough. He had a deal to purchase a stainless steel plate manufacturing company for 25 cents on the dollar and sell it for a $100 million profit. The deal was his by legal right.

During the waiting period before closing, the owners of the company approached him and asked if he could walk away from the deal. There was another company, they explained, that had offered to buy them for 100 cents on the dollar and can keep the entire mill open, enabling the employees and town to maintain their livelihoods. But Mike would have to walk away from the deal.

Mike had a moral dilemma. So, he went home to talk it over with his dad.

After hearing the pros and cons, his dad looked at Mike and said -

"Son, it looks like to me there are two opportunities here - if this steel company comes in, the creditors get 100% of their money, and 100% of the employees go back to work, and the suppliers have got much bigger business, and you get nothing.

On the other hand, if you get the business, the creditors get screwed, 50% of the employees and their families are without work, and the suppliers have their business cut in half, but you're doing good. I think I raised you better."

So, Mike, who grew up poor, walked away from the deal.

I don't know how many of us would have walked away. Legally, this would have been perfectly in the right and a hundred feet away from any shade of gray. It would have been easier to find and justify the reasons to take the deal.

But, Mike and his dad were operating by another set of standards and values. It was a tough decision, and Mike made it, based on the values that he lived by. On that alone, it was already a good choice.

Now, here's the punchline. Two weeks after he walked away from the deal, Mike received a call from one of the biggest lenders in the country. They were so impressed with his character and told Mike that he was the type of guy with whom they wanted to do business. Fast forward years later, when Mike examined his billion dollar holding company, 75% of the businesses in it were in one way or another connected with that lender.

Not all of the choices we face in our careers will be this extreme. But, this story does highlight the fundamental elements and the key consequences of good choices.

As much as we want to believe the contrary, there are precious few things in our careers that we have control over. We have little control over the outcomes and we have even less control of the circumstances. Most of the time, we can't even truly control how we feel about something.

But, in spite of circumstances, feelings and the absence of a crystal ball, we have complete control over how we choose to act.

People who make good choices inspire others, build trust, and compel others to champion their success. A key consequence of the choices that we make is that they represent who we are.

And in our life journey, we have not yet become whom we are meant to be. So each choice is a new opportunity to define who we are. There are two facets to this:

So that means, through our ups and downs, we need to look at our career as a journey - one in which we can choose to get up again after a failure and one where we will not let success blind us to what we need to continue to do. The very best people with exceptional careers subscribe to this philosophy.

So what makes for a good choice? For many other leaders with exceptional careers, it's a values-based decision. It's the choices that we make that will ultimately define who we are - to others and to ourselves. To make good choices, you have to know what you stand for and have a value system.

So while growing up, Mike Heisley may have had "nothing" by traditional measures, he in fact had everything by value-based measures.

Good choices are the building blocks of an exceptional career- from assessing for character in networking or for right cultural and values fit in finding companies to work for, to making decisions that may come at a cost in the short term, but are good choices in the long run. Personal considerations such as time with family and for nurturing our friendships are also key factors to consider.

So, readers, what are good choices that you have made in your career and why? Please share in the comments and send in questions and topics that you'd like to see. You can also tweet at me @SanyinSiang and #ExceptionalCareers.

For another great resource on navigating career choices, check out the blogs at The Regret Free Life. Know of a great site that's talking about redefining success? Share it with us!