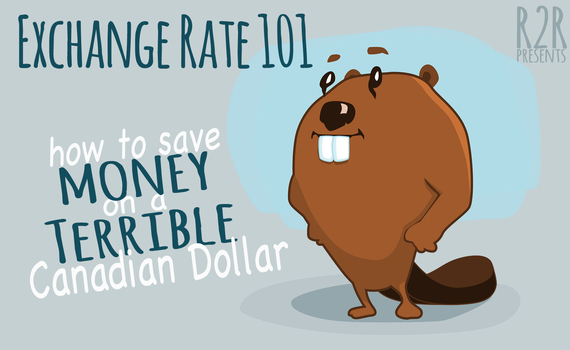 A few weeks ago I bought several pairs of socks.

Except that's not how the story ended.

Those socks ended up costing me almost $5 a pair.

1 Canadian dollar = 70 cents American (and it's now... probably even worse by the time you read this)

The best advice for saving money on a bad Canadian dollar (and why it may not work for freelancers).

I bought those socks when I was in New York visiting my girlfriend. She's a freelancer who does about half of her work in the states.

When I got back, I was a man on a mission... there must be some way to save when the dollar is this bad. There are so many smart finance people in Canada, surely one of them would have an amazing tip for me.

The best tip came from Rob Engen, blogger and financial advisor at Boomer and Echo:

Can't really argue with that. And honestly, if you're not a freelancer, or someone that HAS TO travel to the states for work, or relationships, or some other unavoidable reason... you can just stop reading this right now, because that's really solid advice.

But for a lot of us, 'staying home' isn't an option. So how do we weather the storm that is a terrible Canadian dollar? How do we keep our already thin profit margins intact over the next few years (because most people agree that this is not going to get better anytime soon)?

So this week I'm going to put out a couple of posts about managing the US/Canadian exchange rate. Sorry to my wonderful non-Canadian readers, but don't be distraught. To you I offer this advice: come to Canada on vacation and live like kings.

For the rest of you, over the next few days here's what we'll be looking at:

Post 1: Exchange rate 101, and how to save when you're spending money
Post 2: Making money in the states: 2 ways to save on fees when you're bringing home the bacon
Post 3: Some thoughts on how freelancers can best position and protect themselves when the Canadian dollar sucks

The first thing that you need to know about the business of exchange rates is that people make a butt ton of money changing money between
currencies.

You don't need to understand all the ways they do it, but you do need to know that the average person (like me) isn't 'making' money off of exchange rates... we're paying. 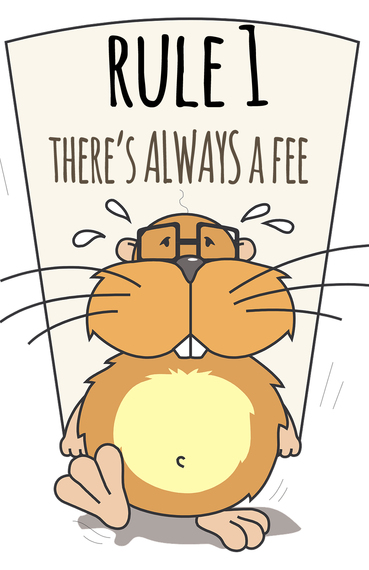 You also need to know that the rate you see plastered all over the TV and the yahoo homepage is NOT the rate that anyone will actually pay you either to get US dollars, or to trade them back in for Canadian ones.

Rule one of currency exchange: there is always a fee.

The thing that you need to decide for yourself is: do you care?

The personal finance community likes to talk about fees like they're the worst thing in the world. But fees are sometimes completely worth it for the convenience of a service.

Like anything in the world, there are always ways to 'save money', but you decide if it's worth the hassle. Do you want to be the guy who barters with the teller at Walmart? You may think you don't... but that guy just got 2 BBQs for the price of one...

The point isn't to avoid fees at all cost, it's to understand them and then make an informed decision.

Where does that fee come from?

So how do the banks make money? I called them to ask a few questions and it went a bit like this:

*The following was a dramatization of a conversation that happened a while ago... the details are clearly not exact, but the subject matter is spot on. We talked for a while and the bank weirdly refused to use the word 'fee' or tell me how they made money on cash currency exchanges.

I called again this week (the same bank).

He then gave me a bunch of comparable rates, told me to be careful because they change every 3 minutes and we parted ways. Score one for customer service.

Fact: People hate fees. That's why the bank doesn't really like to talk about them. Instead what they do is take the 'real' exchange rate (the one that you hear about on the news), add their fee and make a new rate that they offer to people. So you don't see: exchange rate + fee. You just see: increased exchange rate.

With credit cards it's a little more cut and dry. They're fairly straight forward about their fee. When I called my credit cards it was also a 2.5 foreign transaction fee that they applied on top of whatever exchange rate they were charging (although he became very confused when I asked him how they set their exchange rate... I guess you can't have it all).

I'd like to pause for a moment to say: this is not a definitive post/list on foreign fees. I have not called all financial institutions, or credit cards. I talked to the banks that I work with, and checked out a few others online. It's meant as a place to start. If you're curious about your exact rates: call your bank/credit card and ask (but here's a hint: if they say they don't charge fees... they're not really telling you the truth).

Okay... back to the banks and their fees. I don't know... banks charge fees. Banks make money. So do credit cards. They're also a super convenient way to get cash, and spend cash. The question is still, does it bother you? And if it does... how can you save some money?? 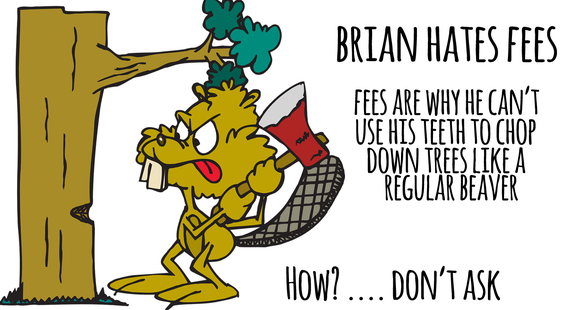 There will always be fees. But if they really bother you, there are ways you can save a bit of money.

Like always, it's up to you to decide whether it's worth the time and the effort to save a few bucks. But for those of you who travel and work in the states a lot... it might be worth it to investigate.

Getting the best rate:

It's basic advice, but different banks and organizations have different rates. I spent 10 minutes hopping to a few banks and places that deliver cash to your door and definitely found some differences:

These rates change all the time (and these prices don't include delivery fees, they're just the original quoted prices), but it might be worth it to look around for a few minutes before grabbing some cash.

I think it's interesting to note that a few travel sites talked about the advantage of changing cash in the destination country instead of in Canada (they weren't writing specifically about the US) so I thought I'd try a US bank.

*These are not definitive or foolproof experiments... just information. Do your own research.

It seems to me there's a basic rule of money:

If you think ahead you can save money. People love to profit on your forgetfulness. 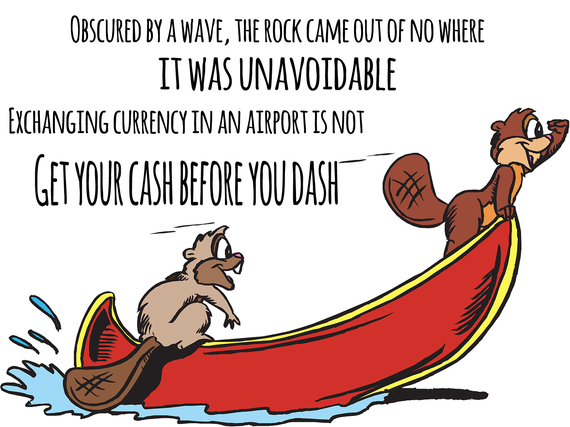 You can't avoid a bank fee (at least not completely), what you can do is avoid paying the higher fees that you'll find in the airport at those little currency booths.

This article from investopedia simplifies it nicely:

I will throw out a word of caution about ATMs. They can really hose you with fees. They're all different, so it's tough to break down, but it's good to understand. Sometimes you can end up getting charged by multiple banks and service providers... which is not super fun.

I bank with TD, and it's really nice when I go to the states (especially New York) because they have American branches everywhere. The American TD and the Canadian TD are NOT the same bank, BUT I can use their ATMs without a fee. Which is really nice.

I have a great travel card. I collect points. It's got good travel insurance, and some other tasty travel perks.

It also has a nice little 2.5% foreign transaction fee. This is something I kind of knew... but hadn't given much thought until the dollar got absolutely terrible and I started writing this article.

If you travel a lot, you might be interested in getting a NO FOREIGN TRANSACTION FEE credit card, of which there are shockingly few.

It's interesting to me that there are so few credit cards with no foreign fees, so let me know if you know of some that aren't on this list.

The only one of the three without an annual fee is the Amazon card, and they all have different perks which may or may not sound tasty to you.

Just remember, you might be hooked on your card that gives you 2% cash back, or a couple of travel points per dollar spent, but if you've got a foreign transaction fee you could be losing all of that when you travel anyways.

2% cash back MINUS 2.5% transaction fee = you're losing money... not gaining it. #thinkaboutit

Setting up a US dollar float:

This might be my favourite method, and it's especially useful for people who work in the states quite a bit.

Don't spend your Canadian money in the states. Keep US dollars available for when you go down. 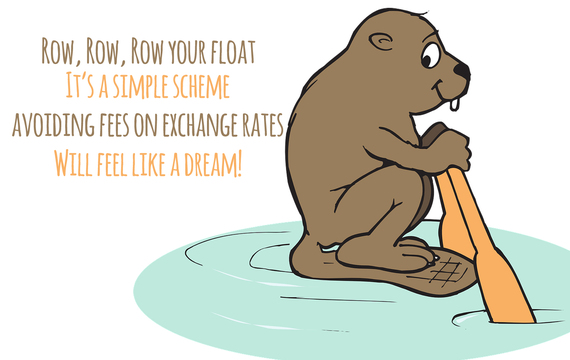 If you believe some of the crazy doomsday predictions for the Canadian dollar in 2016, things are not going to go well. They're talking about it dipping to a value lower than 60 cents to the US dollar.

So why not set yourself up now, to avoid that pain?

Most banks have US dollar accounts that you can open. They allow you to keep some of your money in US dollars. That means that if you changed a few hundred bucks over now, and the dollar goes down another 10 cents... it matters less. On your next trip to the states, you're spending US dollars.

This works especially well for people who are working in the US and getting paid in US dollars. It's really tempting right now to bring all your money back to Canada and take advantage of the sweet side of this crazy dollar... but it might be a good idea to keep some of it in the states.

The idea of setting a 'float' is having an account with US money in it that you can use instead of being a slave to the variable dollar.

When you're a freelancer, any way that you can cut out some variability is sanity in your pocket.

*It's important to note that exchange rates are really variable and impossible to predict. No matter what the 'experts' say today, it may change tomorrow. A float can be a useful tool, but there is always risk when you're transferring between currencies. You CAN lose money.

You can definitely save some money shopping the market, thinking ahead, getting the right credit card and setting up a float. It takes time, though... and maybe for the small amount of money that you change over it doesn't matter.

But if you're in, and want to squeeze the value out of every dollar made, then take a look at some of these tools and start saving.

I know that I'm going to look into getting a no foreign transaction fee credit card in the new year, as well as looking at setting up a US dollar float.

What do you think? Is it worth the energy for you to save a few bucks? How do you save on the bad dollar or does it even matter to you?

If you want to learn more... check out PART 2 of this series on Exchange Rates in which we talk about how to save hundreds on fees when bringing money across the border!