World, meet the exclamation comma -- the punctuation mark you didn’t know existed, but that you almost certainly need in your life.

The exclamation comma is, as its name suggests, a symbol that looks like an exclamation point, only with a comma instead of a period at its base. As the Grammarly blog noted this week, it’s used just like an exclamation mark “to denote excitement, add flourish, and generally lend a statement a certain degree of emotion and emphasis,” but it’s to be placed within sentences rather than at the end of them.

“That velociraptor is so scary [insert exclamation comma] but don’t worry, he’s not going to eat you.”

“I’d love to use a new punctuation mark [insert exclamation comma] yet the others might get jealous.”

The exclamation comma was reportedly created by American inventors Leonard Storch, Haagen Ernst Van and Sigmund Silber in 1992, who also lobbied for its widespread adoption. However, their patent for the symbol lapsed in 1995, and their effort to popularize it ultimately failed.

Interest in the exclamation comma has surged this week after the Grammarly blog’s post on it, but it’s not the only obscure punctuation mark that deserves attention.

For instance, there's the question comma (the exclamation comma’s inquisitive cousin), the SarcMark (short for “sarcasm mark”), the irony mark and the wonderfully-named Interrobang (which looks like what would happen if an exclamation point and a question mark jumped into bed together).

I think we need this type of punctuation-A question comma, a quoma. Ex: What am I to you (quoma) chopped liver? pic.twitter.com/VAKwSoQ0SL

This is SarcMark, invented by Paul Sak to emphasize a sarcastic phrase, sentence or message. So needed on my iPhone. pic.twitter.com/XCb2Hyd5ct

The interrobang is a question mark and exclamation point in a single punctuation mark. http://t.co/E5Q8sRjhwZ pic.twitter.com/wRYKRcBFXl

I love the exclamation comma. "Just because you’re excited about something doesn’t mean you have to end the sentence." pic.twitter.com/PF11XqEN

Would you use the exclamation comma or any of these other unsung punctuation marks? Weigh in below.

PHOTO GALLERY
The Placement of Punctuation

Meet The Obscure Exclamation Comma: Because Excitement Can Happen In The Middle Of A Sentence
The Placement of Punctuation 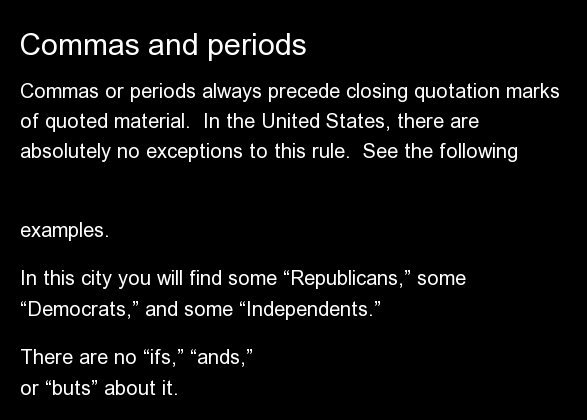