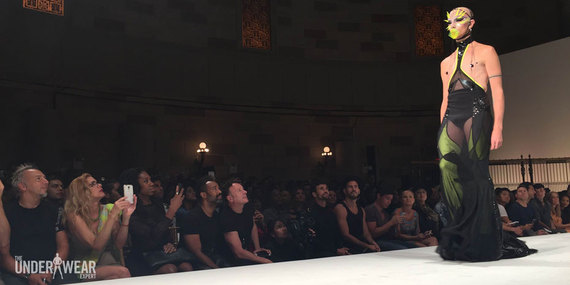 Designer Marco Morante granted The Underwear Expert all access to the first part of this year's Marco Marco fashion show, "F*KN SIRIUS," part of Style Fashion Week. Similar to last year's "Slut Goes To The Moon" show, this year's runway drew a crowd of fabulous celebrities, queens from RuPaul's Drag Race, and of course, eye candy in the form of male underwear models.

I was joined by recognizable faces and bodies such as models Colby Melvin, Jason Wimberly, Brandon Cole Bailey, Carson Kressley and the man behind the funky-sexy magic, Marco Morante himself.

When it comes to Marco Marco fashion, we've learned to expect the unexpected. There's no sense in telling you to brace yourselves. Instead, check out our Instagram shots from the show below, as well as a video taken with our exclusive access. And again, this is just part one of F*KN SIRIUS. Part II is expected next month.

What are your thoughts on the Marco Marco F*KN SIRIUS runway show? What look from the runway was your favorite? Let us know in the comments below, or by tweeting us @underwearexpert.

For more information on this brand: Marco Marco