The good news is piling up for musician Cory Chisel. Death Won't Send A Letter -- his first proper album for a major label (RCA's Black Seal) -- is out in stores. Rolling Stone pegged him as one to watch. He and his band The Wandering Sons make their network TV debut tonight on Late Night With Jimmy Fallon at 12:30 EST on NBC. Then he performs at Carnegie Hall...ok Carnegie Hall's Zankel Theater (a really cool space) on Saturday night. Then they'll be heading out on a European tour. And if there are any radio deejays left in the country who haven't been replaced by "Jack" and other computerized digital entities, they've probably added his surging, addictive single "Born Again," a defining number he'll be playing for years to come.

But in the crazy, post-radio world we live in, perhaps the best sign of Chisel's growing popularity came with a TV show and a print ad for jeans. Chisel released a more acoustic EP called Cabin Ghosts prior to this album and one song -- "On My Side" -- got prominent placement on the FOX hit House, immediately reaching millions of viewers.

"The placements in TV shows these days are about as big a thing as you can do anymore," says Chisel. "It almost is the new radio. It's the new way people are finding out about a lot of music. And there are a lot of really great shows like 'House' or 'Mad Men' or 'True Blood.' We were assured by the people that it was going to be a poignant moment. I was happy and felt like it advanced the plot. A lot of people heard the song and we see people almost every night that that's how they heard [of] us."

And don't discount the importance of a good pair of jeans, especially when it's Lucky Brand Jeans and they're highlighting your music, not to mention a favorite hometown pizzeria in a national ad campaign.

"That ran in Rolling Stone and, like, Vogue. That's another thing I wasn't so sure about," admits Chisel. "You want to be as much about the music as possible. But I really liked the idea of the campaign. They said, 'In a world where it's really hard to break new artists, we want to put your face out there.' They were showcasing painters and photographers and young upstart people that were making new and different things. Obviously they're trying to advance their brand's image. It was one of the nicest paydays I've had. I think I lived off of that and I think that helped me make my record as much as anything else if you want to know the truth -- affording us the ability to stay alive while we made up our mind what kind of music we're making. 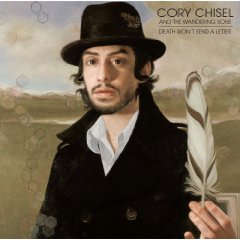 Despite the TV shows and the commercials, Chisel maintains a rootsy, rebellious appeal. He's based in the heartland - Appleton, Wisconsin to be exact -- and was the stereotypical son of a preacher man; in other words, trouble. He was the sort of kid who wore a mohawk and rude t-shirts and did anything he could to get a rise out of his Baptist minister father and piano teacher mother. (Chisel says if he got any work ethic it was from his diligent mom, even though he was too "pig-headed" to take lessons from her.)

"I was really the kind of kid I hope I don't have," he laughs.

"I had duo hawks at one point," says Chisel, chatting on a cell phone while traveling to Grand Rapids, Michigan for a show. "Anything to piss my parents off. And they really hated that one. I'd wear the Nazi punk f--- off shirt, so they couldn't exactly be mad about what I was saying."

As these things usually go, Chisel was looking to rile his dad but ended up upsetting his mom. ("I'm going to write the perfect 'mother' song and make it up to her," he promises.) They all found common ground in music: mom played the piano while dad preached and Cory was dragooned into the choir, which rarely amounted to more than a few 80 year old men and a handful of unhappy kids. Chisel insists it was the music of the hymns like "That Old Rugged Cross" that moved him more than the lyrics. But clearly some of that religious imagery seeped in; as with Springsteen and U2, his songs are layered with allusions to the Bible. And while they rarely met eye to eye when it came to the music they wanted to hear, Chisel scored points when he wrote his own tunes, something he began to do as a teenager.

"Usually if I had made the music, they couldn't dismiss it in the same way," says the 27 year old Chisel, who is married to a high school English teacher and lives on a small farm in Appleton. "I couldn't turn on the Clash and expect Joe Strummer would expand my mom's mind. Oftentimes I would ape the sentiments and put it in my own music and see if she could swallow that pill.

"I never really did want my parents to hate me. You find that phase where you want to be respected as a thinker. My dad has a way with words, for sure, so winning an argument in the household? The only way you're going to do it is if your guitar is louder than his preaching voice."

At least everyone could agree on one thing: Johnny Cash.

"If anybody rebels by not listening to Johnny Cash, they're making a horrible error," says Chisel. "Johnny Cash has always been the figure that I've admired the most. People let him be both things: they let him be an outlaw and a friend, spiritual and pagan. He's one of the lucky artists who've been viewed as a whole person. That's something I was always really really turned on by. He was the guy that my mom liked that was naughty. If people can't find common ground with him, I don't think we need to be friends."

But for all his talk of rebellion and the pleasing image of an uptight dad driven to distraction by his wild son, the truth is more complicated. Chisel talks about debating issues of faith with his father, but not in the conservative vs liberal way one might imagine. He proudly talks about his dad refusing to preach on issues he didn't believe -- such as condemning gays. Ultimately, according to Chisel, it cost his dad his job.

So while preaching and staying true to your faith sometimes does mean rebelling, rock and roll often involves working well with others. First you have to work with a band. Then -- if you're lucky -- you collaborate with producers and other talented musicians. When Brendan Benson of The Raconteurs agreed to meet with Chisel, he and his band-mate and musical sounding board Adriel Harris agreed the riff from the song in progress "Born Again" was one to play.

"I'm pretty sure it was her idea to blow that one by him because I'd kind of reached an impasse," says Chisel. "I had that piece and I knew it was smart and meant something to me. I had that line -- 'Momma didn't raise me to be no Christian' -- and we both kind of come from a similar background and it kind of made both of us go, 'Oh shit!' What are we saying with this? We might get in trouble with this.

"We played it with Brendan. He has an enormous amount of energy and a killer pop sense. I tend to default on the side of making things sort of wordy and masked. He picked up on that song and said, 'You've got to tell this story and just tell it. And don't worry about hiding its meaning.'"

It might have been intimidating to work with an artist who has collaborated with the likes of Jack White and has just released the best album of his career, My Old familiar Friend. Happily, they had some things in common.

"We're both kind of closeted...not even closeted -- we're fully open winos, I guess. We like wine a lot. There's this place in Nashville called Marche that has good wine so we met there for dinner and talked about everything but music. He's from Detroit and it was just really easy to see we were going to get along. It sounds more like we're hooking up for a date more than making music," he laughs. "So we decided to go back to the place where we were staying and have another bottle of wine."

And what wine were they drinking?

"If I remember it wouldn't have been a good party. So I have no recollection of what we were drinking. I was just showing him on an acoustic guitar songs I had written. Then he said, 'Show me something that you haven't done. Show me something you love that you're hiding because every writer is hiding something they love.' After the earlier conversation with Adriel about ["Born Again"], I just played him this riff and sang him the first few lines and literally he practically grabbed the guitar out of my hands and just started helping me bang out this chorus. We were thinking of somewhere along the lines of a revival song and 'With A Little Help From My Friends,' because it was this new friendship that was blooming and we were working on our first record [together] and we wanted that excitement to be in the tune. It was done -- the way I remember it -- in less than an hour."

Thanks for reading. Visit Michael Giltz at his website and his daily blog. Download his podcast of celebrity interviews at Popsurfing and enjoy the weekly pop culture podcast he co-hosts at Showbiz Sandbox. Both available for free on iTunes. Link to him on Netflix and gain access to thousands of ratings and reviews.