DC Comics has been on the cutting edge of trying bold, new things for that last few years and this announcement is no exception. With these two brand new titles, DC Comics is taking the themes and issues that came to the surface with the Occupy Wall Street movement and are bringing both sides of the coin into the world of superheroes.

Since that seems to match the sensibility of the readers here, what better place to announce these new books and reveal this new artwork than the Huffington Post? 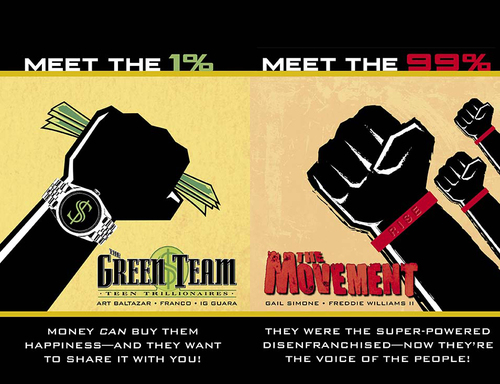 The two companion titles, helmed by Gail Simone and Art Baltazar and Franco, respectively, take on the rich and the poor in the super-powered DC universe.

I asked Gail Simone to tell me about her book to get a better sense of what it is and what we'll see.

The Movement is an idea I've had for some time. It's a book about power -- who owns it, who uses it, who suffers from its abuse. As we increasingly move to an age where information is currency, you get these situations where a single viral video can cost a previously unassailable corporation billions, or can upset the power balance of entire governments. And because the sources of that information are so dispersed and nameless, it's nearly impossible to shut it all down.

But since this is DC Comics, Simone let me in on how this sensibility of story will fit in a world of superheroes:

The previous generations of superheroes were not created to address this, it's a legitimately new frontier, both for the real world and for storytellers. It's an adventure story, but it really isn't about mad scientists and jewel heists, it's more about the injustices that can affect real people's lives, just tarted up in costumes and superpowers.

Baltazar and Franco's book, The Green Team, explores the question of wealth buying super-power in a world of heroes. It's also their first official story in DC's New 52.

Neither of these books come out until May, which means we have a while to wait, but this tease has got me extremely excited and curious. Gail Simone is one of my favorite writers (and her Twitter feed is hilarious) and Baltazar and Franco are also two of my favorites; their book Tiny Titans is a monthly must-read for myself and my daughter.

You can find my complete interviews with the writers over at Big Shiny Robot!.

Bryan Young is an author and the editor-in-chief of the geek news and review site, Big Shiny Robot!