It was the opportunity to drive yet another futuristic car, Chevrolet's Volt, this effort by General Motors a magnificent piece of work, especially its gas/electric powertrain.

Smooth as silk, so quiet Rolls-Royce has competition for their Ghost models, Volt could be a remarkable car which captures the attention of the American public; but getting people into Chevrolet showrooms is the real trick, isn't it? If they don't visit the dealer, they can't buy the car.

Volt won't go on-sale until November, 2010, but Sunday morning I drove the pre-production version of the car and spent well over an hour with Volt's Chief Engineer, Andrew Farah. Farah's been with the Volt almost since its inception. 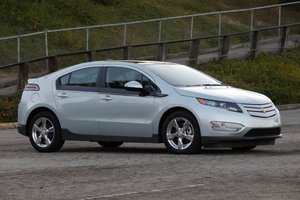 We didn't learn too much more about the Volt that we didn't already know, but the chance to drive the real thing spoke much about the car.

So let's take a drive in a Chevy Volt.

Outside, it's a fairly conventional looking five-door hatchback. GM doesn't want to scare any potential buyers away by depending on only the wind tunnel for all the design touches. Design being purely subjective, and although the car expectedly doesn't look much like (or half as interesting as) the Volt concept, GM has hit what many might think a happy medium between too conservative and too far-out. 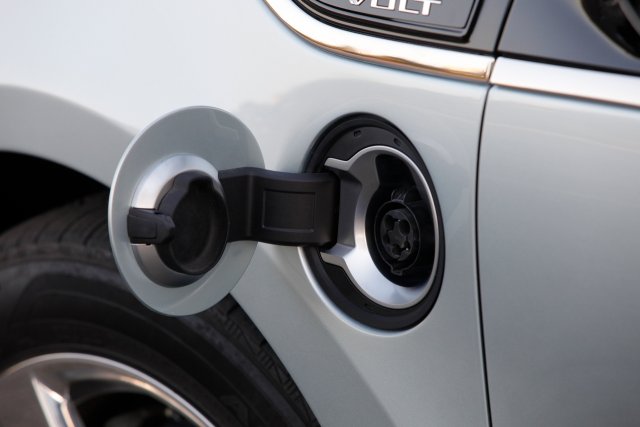 Volt's 240-volt receptacle; there are also a 110-volt plug and a gasoline filler

There are three filler doors on Volt: one is for gasoline, one the receptacle for its 240-volt electric line (GM expects Volt buyers to install the charger at home) and there's a plug for a conventional 110 outlet.

The grille is mostly covered by plastic strips, and the engine/motor get their cooling air, like most modern cars, from under the car. Farah pointed out there are several "heat exchangers" (radiators) in the front of the engine compartment, including one each for the gasoline engine and electric motor, one for the air conditioning system, and more. 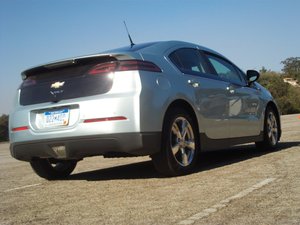 Inside, the front seats offer pretty good legroom and headroom; the rear is a different story. While there's a nice amount of rear headroom, legroom is at a premium. I'm about 5'4" and wasn't comfortable in the Volt's rear seat.

Inside, there's more plastic than you can shake a swizzle stick at, but that's the kind of thing which could change before production begins. Unusual designs on the front door inserts are eye-catching but, frankly, a little weird. It's probably the most radical style touch on the car.

Unlike Nissan's Leaf, which has its batteries under the floor of the car giving passengers a flat floor, there's a high and wide center tunnel running between Volt's left- and right-side seats, front and rear, which is part of the battery system (which weighs about 400 pounds; Farah wouldn't give me a total Volt weight figure, but around 3,700 pounds wouldn't be far off). 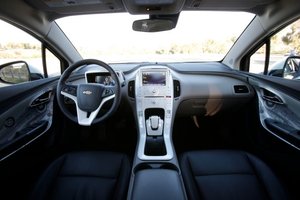 There's a computer screen instrument panel in front of the driver, a sophisticated unit which appears to be simple and easy to understand. The center stack contains another screen for the nav system (optional, as heated seats will be, too), rear camera and audio and HVAC status, plus controls for sound and interior air temperature.

Push the "start" button and Volt springs into life, though you might now know it because you won't hear or feel anything. A high-concept center shifter helps you pick your gear. All in all, it's an intuitive area for the driver, and GM drivers especially will feel right at home in Volt. It's a mix of old and new switchgear and screens.

The car is quiet, smooth and fast off the line (electric motors have all their torque at start-up, unlike gas engines which need time to build power). There's a bit more understeer (what racers call "push") than I would like; you except some push in any front-drive car or truck, but it's more pronounced in Volt. The most pronounced noise in the cabin was tire rumble. Farah said that he's not satisfied either, and GM is still working out a final choice for Volt's tires.

There's good driver visibility front, rear and to the sides. Getting in and out of the four-door is easy and naturally it has all the requisite airbags and other expected safety equipment. One more safety item: pull the turn signal lever and a horn gives two quick "toots" to warn pedestrians the car is around. By the time Volt gets to market, there will be a standardized, mandated sound for all "quiet" cars and I can't see the government (or the lawyers) allowing an active system rather than passive.

It goes, runs and stops, fitting most peoples' requirements for transportation. 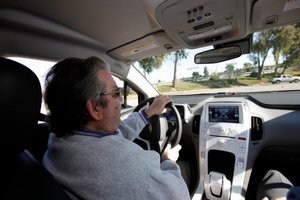 Yours truly, driving the Volt

Pre-production vehicles like I drove come after the concept and then the prototype stages; the car I drove might look a bit different inside and out when it does go on-sale. The powertrain and drive system, Andrew Farah told me, are pretty much set in stone and almost ready for the production versions. Farah told me that about 80 pre-production cars are being built for media evaluations, demonstrations for governments and utility companies and four of them will be the Volts you'll see at auto shows. Also, we ignore fit-and-finish in pre-production cars, so no comment on Volt's F&F inside and out; the final production cars are always better

I've driven almost all the gas/electric hybrids out there and even Honda's FCX Clarity hydrogen fuel cell sedan, and all of them are varying degrees of remarkable in their acceleration, interior quiet and, of course, high mileage. 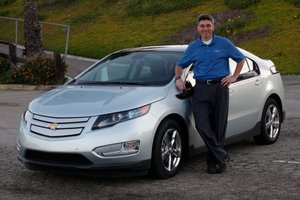 In the hybrids we're used to seeing, the car runs mostly on the gasoline engine with assists from the electric motor; Volt turns this around by making the electric motor the only drive system. A 1.4 liter 4-cylinder gas engine, which has no connection to the front wheels, is used to keep the batteries charged during the drive. This also means if there is a major failure in the battery or electric drive system, the gasoline engine is useless for keeping the car moving. So you can theoretically be stranded in a four-cylinder gasoline engine car with a full tank of fuel.

What's the mileage with Volt? GM was ridiculed a few months ago for saying they expected 230 mpg with Volt. That's their story, and they seem to be sticking with it.

Andrew Farah told me, when I asked him two times during the day about the size of the gas tank, that "the fuel tank is large enough to produce a mileage figure of about 340 miles per fill-up". The 40 miles can be had on electric only, then the gas engine kicks-in to keep the batteries charged at a pre-set level so Volt's electric motor can continue to run.

He told me that the actual size of the gas tank, how many gallons it will hold, is still an in-house secret. However, announcements about Volt will be made at the Los Angeles Auto Show's media days this Wednesday and Thursday, and perhaps we'll find out the fuel tank size then.

That most-important announcement -- of pricing -- may or may not come this week. But Farah didn't flinch when I asked about the $40,000 figure which has been floating around for more than a year; he pointed-out that there is a $7,000 tax credit available, and with state and local incentives, pricing might drop below the low-$30's. 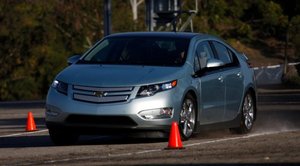 GM had set-up a coned-off "track", maybe ½-mile long, in a parking lot at Dodger Stadium, similar to the "race track" on the Jay Leno Show. On the Sunday after Thanksgiving, our Southern California weather was bright, clear and 76 degrees in downtown LA. GM certainly got the best possible showcase in terms of weather and the famed Dodger Stadium.

Interestingly, GM officials have generally referred to the Volt as an "extended-range hybrid" when the car was first announced. Now that's changed: it's being tagged as an "extended-range electric car". Trying to have the public think the Volt is all-electric, like Nissan's upcoming Leaf? Could be, but I don't think Volt should be referred to in any way as an EV; its on-board gasoline engine, albeit as small as it is, makes Volt a gas /electric hybrid (or maybe an electric/gas hybrid).

And they wouldn't let us take pictures of the engine compartment. Still not ready for its close-up; not yet as clean and tidy as GM would prefer

More in a future post this week after the Volt announcements at the LA Auto Show.

Now does it sound like the Volt is for you?