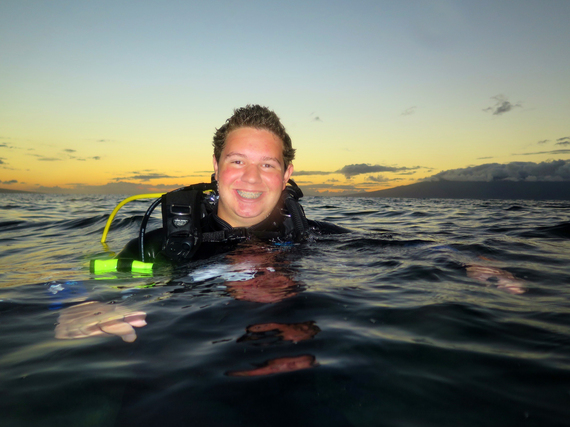 The Power of Citizen Science

Thank you for having me here at the Annual Ideagen Data for Good 2030 Summit. As
a millennial, as a 17-year-old, I don't have these experiences too often, but being
here, listening to the conversations, it's inspirational, as a 17-year-old looking ahead.
I'll start with a little hook. Maybe you've seen this before. I want you all to take two
breaths. I'm serious about this. Two deep breaths. Okay. There we go. You might not
know that over 50% of the world's oxygen is formed by the ocean, by plankton
blooms. A lot of my work has been surrounding the ocean, so this statistic is shocking
for me. Especially at a young age realizing both the impact on personally, or as a
society, our sustainability, as well as the fact that over 3.5 billion people depend on
the ocean as their primary food source.

You can see through even just a health perspective, the importance of the ocean, and
realizing this as a six-year-old, at the time ... At a young age, I witnessed the
devastation of an ocean ecosystem. This is actually a reef, off the west coast of Maui.
I saw that the coral ecosystem, the biodiversity was degrading through my various
excursions and trips out to the coral ecosystem. This resulted in my investigation of
the problem.

What I find very interesting is that what I discovered is actually exactly what's written
in the problem statement on the brainstorming sheets here at Ideagen, that there
was a lack of data, specifically in marine ecosystems, to monitor, research, and also
document these ecosystems.

At a young age, I decided to try to do something about that. Specifically around data
collection, I created a non-profit organization, Reef Quest, which is fostering marine
environmental stewardship through citizen science, and has reached over 60,000
students in 48 countries. What we're doing is not only an educational platform, it's
using research and data collection as the platform for education. In doing so, sharing
the data that is collected.

On west Maui, Kahekili Reef it is interesting to notice all of the development
surrounding the ecosystem. That is one of the leading causes of the devastation on
this particular ecosystem. What we'll see in a few minutes is that that dynamic was
not apparent until that data was collected.

What Reef Quest is doing is utilizing the power of citizen science. Some of you might
say, what is citizen science? Essentially citizen science allows ordinary people, like
myself, untrained individuals, to partake in actual marine research. I said marine
because that's our application, but really research in general.

The power of citizen science is that the data that's collected is scientifically rigorous
and can be used in actual publications, in studies, but can be collected from a much
wider base, essentially, of students, citizens.

As I started developing the program, you can see traditionally citizen science within
the marine field essentially took a normal survey that scientists would conduct and

made it easier, so that people can go into the field, collect the data, and then report
out back to the scientist, saying what they found.
However, the difficulty that we found, especially within school settings, which is
what's listed here, is that most schools, really can't go into the field, or won't go into
the field due to liability reasons, even if they feasibly can make it into the
environment.

Then the second issue in that problem was, how do we actually collect data off of an
ecosystem that is not digital. A lot of people know of meta data collection. What's
nice about meta data collection is that that meta data is based on that website.
What's different about citizen science in the marine field is that you have to then find
a way to virtualize that marine ecosystem in a rigorous way, a scientifically rigorous
way, so that you don't lose any of the specificity of the actual ecosystem in the
virtualization process.

What needed to be done were twofold. One was, a development of a virtualization
technology, which actually we worked with Microsoft Research on, so that's a
coincidence. Then also, virtualization of well-established citizen science surveys. What
that resulted in was both a platform to collect data, but also a platform to share the
data. The citizen science data that's collected off of these virtual platforms, this is an
example of one of them, it's called The Virtual Reef, and it uses a technology
developed by Microsoft Research called Photosynth. Essentially what it allows is for
real ecosystems to be virtualized, and then the entire platform can be housed on a
website for citizen scientists around the world to utilize.

Part I of an Exclusive Ideagen 3 part Ideagen Talk series with Dylan Vecchione.