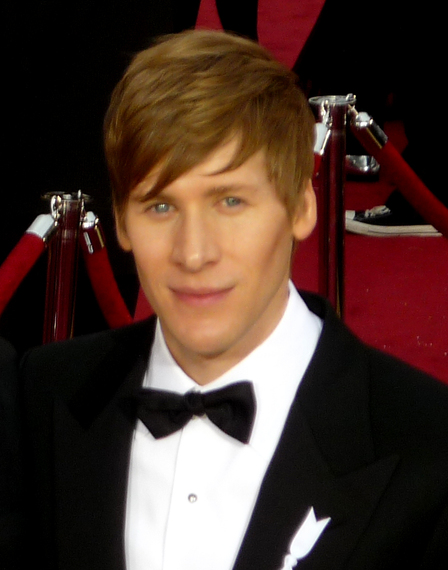 Dustin Lance Black is an Academy Award-winning multi-hyphenate whose accomplished resume includes screenwriting (Milk,J. Edgar,8,Big Love), directing and producing. While he stands out for his success in the entertainment industry, his lifelong dedication to the LGBT civil rights movement makes him something truly unique: a creative professional who doesn't just use his platform for activism. The fact is that the vast majority of Black's work is built on a platform of dedication to social justice: his creative and advocacy work are, uniquely, one and the same.

As someone who studied creative writing and worked on the periphery of the highly competitive and profit-driven entertainment industry for a decade, I wondered what alchemy Black invoked to change the climate of LGBT acceptance and win his first Oscar for the groundbreaking Milk by his 30s, and at a time when simply using the word "gay" still carried a strong taboo in many regions.

"People get cynical about Hollywood, or even publishing," Black said. "The truth is, I haven't gotten any resistance from Hollywood. It might sometimes be harder, and I might have to pitch a little bit more... but if you're writing something you're passionate about that's coming from a personal place, it's going to be so specific and so much more emotional it's going to draw people in Hollywood to it. Hollywood is interested in attracting younger, modern audiences and if you don't tell LGBT stories, you're not reflecting experiences young people are having in school."

Not to say that it's always been an easy sell. "You can see the change that's happened over the past 10 years," Black says. "I did have to pitch Milk around to almost every studio before we reached [Focus Features], which understood you can make money off a gay film. Today, I'm writing an eight-hour miniseries on LGBT movement for ABC called When We Rise, and they came to me. So... if you're loyal to your own passions and draw from your own experience... it will make your work so unique that it will become marketable no matter what genre it is."

Black seems to be propelled equally by his urgent desire to make a positive impact with his creative gifts and a carefully exercised strategic ambition.

He is unquestionably close to his work. Black recently got in a brief twitter spat with the author of a New York Post article that asked whether Milk was "good for the gays." While the rambling article states that "Milk is a very good movie" and seems to conclude that yes, the film represents a historic contribution in the LGBT civil rights movement, the author's overall reaction to the movie could be summed up as "meh." Black took issue with being misquoted in the article, and the author took issue with being criticized for his arguably incoherent opinion. In the end, Black told me that his reaction wasn't as severe as it appeared on social media -- but it's still clear to see why Black is so personally invested in that movie: because it's part of a greater life's work.

Black took years off from his creative work after his meteoric rise in Hollywood to fight California's Proposition 8, which by statute refused the right of same-sex couples to legally marry. His advocacy, which included challenging legislation in California and Virginia (where his mother now lives, 15 minutes from my home town), was an important contributor to realizing marriage equality in the United States. At the beginning of this month, Black and his fiancé, Olympian Diver Tom Daley, announced their engagement.

Black says while he was fighting to defeat Prop 8, he never expected he would end up in a position to be married. He did it on principle with no plans to become married himself; now he is able to reap the fruits of his labor by marrying the love of his life -- who happens to be part of the younger Millennial generation. I asked whether Daley and his peers have a real understanding of the tremendous leaps the LGBT community has made socially and legally over the past several decades.

I do a college speaking tour each spring and fall. I just came back from Texas A&M -- a conservative school in a conservative area -- and the questions were very well thought out, and I thought quite telling.

One, did [today's generation] think that the early founders of the LGBT movement would have been passionate about marriage equality? 'Is this what we should have been fighting for all this time'?

And there's a part of that I appreciate because what they're pointing to is housing and employment issues, personal safety issues particularly for trans people -- so what they're saying is, aren't there other things that need to be accomplished?

In the South, personal safety is the number-one concern for LGBT people. I explain to them that early LGBT leaders came out of the sexual revolution and the women's movement when marriage is something that they wouldn't have been fighting for... many women saw marriage as an institution that held women back.

But since those days, marriage has changed; it's become about a loving union that supports family. And it shows us that we were family, particularly as we have partners who were kept from hospitals... they were not able to share health insurance the way spouses could.

Partners were forced out of their homes when their loved ones died because they had no housing protection. So when you explain that history, they start to see the value of marriage.

"Marriage and trans issues are what come up most when I speak to 18 to 22-year olds," Black said. But there's more. "African-American women ask me if black lives matter to LGBT people -- and I think that's a very fair question. It is important for LGBT folks to break free of our myopia and see our interconnectedness with other civil rights struggles. I love that those questions come up with young people in colleges."

I told Black that I lived in Virginia when the commonwealth voted to ban marriage equality in 2004. Prior to the vote, I viewed the issue as a hollow one created by conservative politicians to polarize voters. The morning after the vote, I unexpectedly found myself devastated, ultimately breaking down during a grad school writing workshop later that day. It was a shock to realize that the majority of people who went to the polls took action to prohibit me and my gay friends from something as innocuous -- something as loving, in fact -- as marrying...and that the average voter was given the power to do that, to limit my freedom. In my mind, it seemed un-American, and in my heart, it felt unthinkably cruel. It took me back to elementary school discussions of slavery, when most students said that they never would have participated in such inhumane behavior -- and we were reminded by our teachers that, in another time and place, crimes against humanity can be easy to overlook.

"The story you just told," Black said, "is the story of the entire LGBT movement wrapped around Proposition 8 in California."

The power of my personal story to change my mother's heart -- she already had a big heart, but she was raised in the South, she was in the military, and we were Mormon. And to see the power of my and my friends' personal stories to change her heart changed my trajectory as a filmmaker. When I got out of film school, I dedicated myself to telling personal stories of people who were being treated unequally.

Milk was strategically done. I was frustrated with the LGBT community and our leadership. We had grown comfortable with incrementalism, we were leaning on straight allies, we had stopped building coalitions with other forward movements... and I knew that Harvey Milk had been successful at the ballot box in a far more homophobic time.

Black said when he learned the story of Harvey Milk, he was "furious." "I set out to do the story of Milk in order to revive the lost political strategy," he said, "which was about coalition building, reaching out to unexpected allies, telling your personal stories, and the abandonment of incrementalism. 'Demand the full thing.' That's what Harvey Milk always said. So I took the power of personal storytelling and the power of a lost history and I made a film and, thank God, it came out on the heels of Proposition 8 passing when people were looking for a way out of the backsliding, and looking for a way forward."

When We Rise is scheduled to begin shooting in January.