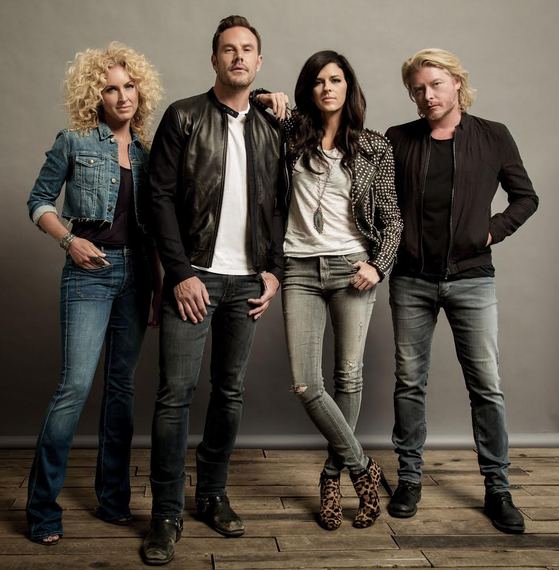 I'm kind of glad we didn't know 16 years ago, when we were driving ourselves around in a van -- one time we drove all the way [from Nashville] to Boston without stopping -- that it would take all these years to find success,

reflects Kimberly Schlapman on the almost two decades she's spent with Little Big Town bandmates Karen Fairchild, Phillip Sweet, and Jimi Westbrook. "Would those four innocent people have kept going had they known? I don't know. I would hope so, but I'm not sure."

"I'm glad we didn't have a crystal ball," she adds.

Because of our journey, this day is so very sweet. We don't take a single thing for granted. I'm grateful for that, because I wanna be the kind of person that drinks things in today, because tomorrow it may well be gone. And if it is, we thank God for the moment we've had right now.

There have been almost too many sweet days to count for Little Big Town lately. The end of 2014 saw the release of the band's critically-acclaimed sixth studio album, Pain Killer, an invitation to join the Grand Ole Opry, and their fourth consecutive CMA Award win for Vocal Group of the Year.

Pain Killer's lead single, "Day Drinking," was the highest-charting debut single of the band's career. Its powerful follow up, "Girl Crush," is currently commanding attention as it climbs the charts, finding superfans in listeners, critics, and even celebrities. Schlapman spoke to me exclusively about the new hit song, the Opry, and one very meaningful milestone she hopes is in the band's future. 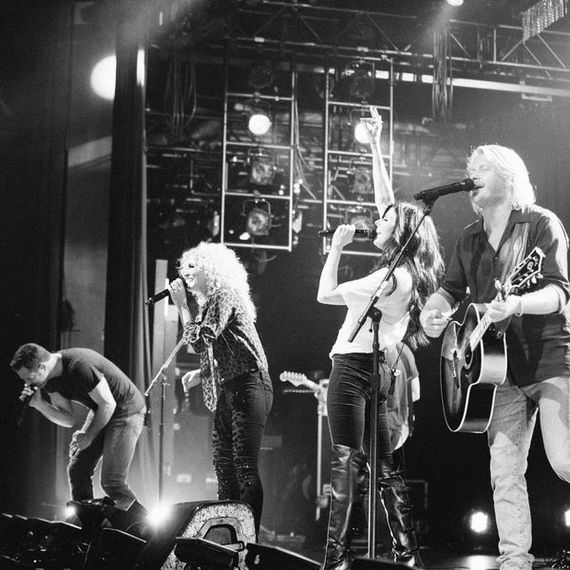 When did you first hear "Girl Crush"?
Karen [Fairchild] and I were writing one day with three ladies who called themselves the Love Junkies: Lori McKenna, Liz Rose, and Hillary Lindsey. They are some of the best songwriters not just in Nashville, but anywhere. We were sitting around Liz's living room and Karen asked, "What have y'all been writing, what's something great you love that you've recently written?" Liz said, "Well, we got this one song that you'll never cut, but we're gonna play it because we love it so much." She put on "Girl Crush" and of course right at the onset of the song it just beckons you to listen real intently, so we were just sitting there listening carefully to the lyrics. A few lines in when you finally get what the song is about, it literally took my breath away. I gasped -- it floored me. Both of us were stunned. We said, "Please don't play that for anyone else. Please let us hold that!" We knew if any other woman in the business heard that they were gonna want to cut it, so we begged them to hold it for us.

How did you and Karen decide which of you would sing the lead vocal?
We were in the studio just working on all the songs [for Pain Killer] together. We were kinda saying, "You sing this, I'll sing that," and I think we just decided Karen should try it. She did, and she just delivered it so perfectly. She just fell right into the deep emotion of that song and became, I would say, an actress in that song, and in that story. I'm so glad I never even tried to sing it because she did such an incredible job. It's perfect for her.

Fans are already reacting powerfully to the song. What did you think of Kelly Clarkson's cover version from November?
We were on the bus that day and someone texted us the link and said, "You gotta see this." First of all, Kelly Clarkson is one of the best voices we have. We were blown away and so very excited. That was the first we had known of anyone covering the song, and that's when the song had barely come out so the fact that someone like Kelly had chosen to work it up, we were just overjoyed and thrilled. Since then so many people have covered it. Miranda Lambert covered it in Nashville. That's never happened to us before. We've had people love and sing our songs but we've never had so many people take ownership of the song and make their own recordings. I think that's a testimony to the song and how powerful it is. No matter who you are, you can identify with a bit of jealousy.

What was going through your mind when you got an invitation from Reba McEntire to join the Grand Ole Opry last year?
That moment ranks up at the top for me in all the memories of us together. From the first time sang on that stage in 1999, we wanted an invitation to join the Opry. That night we had no clue. We were out there singing like we have always done, and all of a sudden we heard this voice that we had never heard before on that song. We looked around to each other like, "What are you doing? What's going on here? Who just did that?" Then out to our left comes Reba, and the thrill of that moment -- I literally have chills right now. Sitting on my couch, I have chills thinking about that moment. It was perfect.

You didn't waste any time between your invitation and your induction!
No! We didn't want them to change their minds! The really special thing about that invitation night is that our families were there secretly. We did not know they were there. For me when Reba came out she asked us to join the Opry I thought, "Oh gosh, I sure wish my mom and dad were here, and my husband and my little girl." My parents live in Georgia so I certainly knew that they weren't there, but I turned around and there was my momma, my daddy, my husband, and my little girl standing right on the stage watching the whole thing. I had no idea my parents were even in town, and when I left the house to go to the Opry that night my little girl was in the bathtub playing with her Barbie dolls, so I was totally shocked. My husband told me later he kept waiting for me to get out the door so he could get the baby out of the bathtub and get her dressed! I even called my momma on the way to the Opry. I never could have guessed she was hiding in a room there! Everyone was in on the surprise. It was just a perfect, perfect night.

Is there anything you can think of that could top that special moment?
We're big dreamers, so there's always more things that we dream of. Honestly, we really, really want to be on Saturday Night Live. That's on our bucket list. And this might sound silly, but we really wanna do Sesame Street. We want to get on there and do a Sesame Street-version of one of our songs. Our kids would love it!

Sesame Street would be so fun! Do you ever talk about which song you'd re-record?
Oh yeah, we do! For our last record, our tour manager's little girl thought the song "Tornado" was called "Tomato." She would go around saying, "I'm a tomato," so we thought, "Oh, that's perfect!" That same little girl thought the lyric to "Day Drinking" was "Day Chicken." So, we make up little things like that all the time. If we were extended the invitation, we would rise to the mark and come up with something really good!

The ball's in your court, Sesame Street. "I'm a Tomato" just might be Little Big Town's biggest hit song yet.