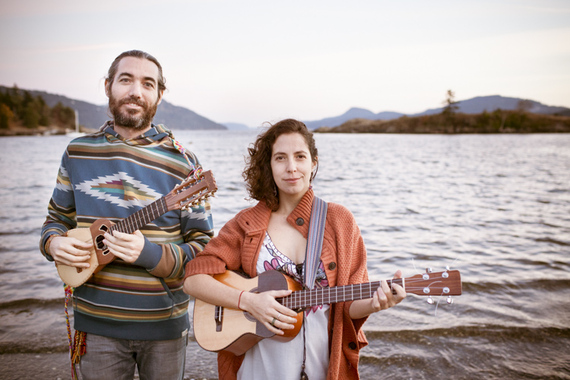 Electro-shamanic duo, Lulacruza (Luis Maurette and Alejandra Ortiz), are beautifying the sonic world with their earthly sounds and profound lyricism. A perfect blend of electronic and acoustic, the music of Lulacruza encompasses the spirit of humans, animals and nature. In this exclusive interview, we discover their inspirations, musical process, and learn about their upcoming album Orcas as well as their newest visual album, Esperando El Tsunami directed by Vincent Moon. Dive with me into the sacred waters of Lulacruza.

Morena: Your music is deeply rooted in ritual, nature and memory. Do you have an artistic process when you create music?

Alejandra: Luis then creates living and breathing sonic ecosystems for the songs to live in. A kind of scenery in which the song can unfold. Since we approach every song and every album as a new organism, we never follow the same formula. It's a slow but enriching process in which musical and non-musical concepts, modern technology and an ever-growing sonic palette are combined, always in search of that perfect magic recipe.

Morena: Music and love are symbiotic. Who and what are the loves in your lives that emanate so brightly from your music?

Luis: For the most part, the love that nurtures our music is a kind of love that is universal. A love that does not belong to one person or one moment. It's the love that Rumi talks about, the love that shows itself in the form of flowers, in the form of sacred geometry, of ancestral designs. It's the love that creates life and holds it all together. During our highest of highs, what we feel, that ecstatic current, crystal clear, silent, expansive feeling, is love, with the mystery of our lives, with the spirit that breathes through us. There is something incredibly powerful in love, it rips you apart and allows you to realize that we are but vessels, both the center of the universe and an insignificant grain of sand, simultaneously.

Alejandra: We can also say that the love for nature is something that moves us to make music.

Morena: You are two musicians from South America finding each other in Boston. What is the story of Lulacruza?

Luis: When we first met in Boston, even before we started making music, we spent a lot of time talking about music, listening to music, exchanging music. Digital technology wasn't where it is now so discovering music was a thing you did in person with other people. While exchanging CDs we realized that we both had a deep love for ritual music, music that is not meant to entertain but meant for experiences that are transcendent. Anything from ceremonial music from Mexican mushroom shamans, and African percussion music used for rites of passage to DJ sets and Pauline Oliveros deep listening experimental compositions. Something about all this music, that created experiences where the listener can transcend their own individuality and deepen their perception of being human, sounded incredibly potent to us. The quest to create this kind of music is what brought us to make music.

Morena: Your 2011 documentary, Esperando el Tsunami, took us on a beautiful journey that showed us the world's duality of light and dark. What was your inspiration behind this film? Was it planned, improvised or both?

Luis: When we started our journey through Colombia with Vincent Moon we had no idea what was in store for us. We were certain about what we were most interested in discovering, the ancient voices that live in each place and how they are "voiced" through birdsongs, culture, language and music. Why does the music of the Guajira desert sound the way it does, and why is it different from the mountain music found only a few kilometers away. But what we didn't know is how we would uncover this mystery. We set up trips to different ecological regions of Colombia, accompanied by musical experts in each region, hoping doors would open and music would be shared with us. We also approached the journey with a clear intention, we would be listening, as deeply as possible, trying to listen to the invisible melodies that travel with the wind, are sung by the insects, and the rhythms that pulsate in the earth. It was almost a meditation exercise, both planned and improvised.

Alejandra: On our first day of shooting we went to do a "pagamento" in a mountain top near Bogota. A "pagamento" is an ancestral tradition where one "pays" Pachamama, by offering fruits, stones, art, songs and thoughts to balance our relationship with the Earth. After walking up the mountain for almost an hour, we reached the top, only to find a recently stabbed body in the bushes. To us it was a clear sign that this journey was no walk in the park. In Colombia, as in nature, death is around the corner, death can happen at any moment. Almost everywhere we went, there had been a very recent death among the families of our hosts and collaborators. Yet, everywhere we went, we were welcomed with amazing generosity, joy and openness. It was a good reminder to us that life is indeed precious and can end suddenly and unexpectedly. Being constantly close to death perhaps makes Colombians not take life for granted, thus being more present with the joys every day has to offer. You could also say that light shines brighter in the darkest places...

Morena: What is your favorite color, plant, and animal?

Keep your third eye open for part 2 of my exclusive interview with Lulacruza!