If I told you that in 20 states in America it was still legal for teacher to hit a student, would you believe me? Well, it is true. The New Mexico state legislature passed a bill outlawing corporal punishment in schools and the bill is sitting on Governor Susana Martinez's desk to be signed (she has 7 days to sign the bill otherwise it dies).

The New Mexico state legislature passed the bill because of one man: fashion mogul Marc Ecko. Ecko launched a campaign at SXSW called 'Unlimited Justice' to get this issue out into the open. Hopefully because of this spotlight these ridiculous laws will be taken off the books in the other 19 states and Martinez will sign the bill New Mexico legislators passed into law.

I recently had the opportunity to interview Marc Ecko and below is our exchange...

- How did you fall into activism?

We all have the ability to give, but I've been especially fortunate in my life to be able to dedicate a lot of my time to philanthropy. I support several educational nonprofits, including Sweat Equity Education, Big Picture Learning, Stoked Mentoring and the Education Equality Project. I also started Artists & Instigators, which focuses on entrepreneurship, and now the 'Unlimited Justice' campaign to end corporal punishment in public schools. For me, it's a matter of keeping the conversation moving forward.

- Now that we know how you became an activist. Tell me, how did this current campaign come to be in your life?

Well, I've been involved with education reform for a decade, but a few years ago a colleague mentioned that corporal punishment is still legal, and a light bulb just went off. There is so much debate about our education system; it's difficult to get anyone to agree on a single issue. But this is something that everyone can agree on, hitting children in public schools is simply wrong. The 'Unlimited Justice' campaign is a great platform to get the word out about this and to get people involved.

- Of all the issues in the world today, why do you think paddling in schools is so important?

With so many education reform issues facing our country, paddling is one that nearly everyone can agree on. Corporal punishment is about having a large adult use physical violence on a smaller child in the name of enforcing discipline. This has been proven ineffective by numerous scientific studies. This violence not only fails to instill discipline but it also leads to increased aggression by those paddled as well as lower student achievement. That's a social injustice that is simply a matter of right and wrong and that's why I think we all can agree. If you go to http://unlimitedjustice.com, you can watch the stories of some of the kids across the country that have been paddled and really see what it does to these kids. It's horrifying.

- Paddling in schools seems so archaic. I think most people would be shocked to find out it's still taking place in America. How did something like this fall through the cracks?

It's strange because corporal punishment was first outlawed in my home state of New Jersey in 1867. How one state could determine that paddling doesn't work 144 years ago, yet 20 states still use it, it's mind boggling. Thankfully, we've teamed up with Foursquare so students will be alerted when they enter a school with a history of corporal punishment.

- You have started so many brilliant ventures. What's your best advice to young entrepreneurs?

Never stop learning. We all have the ability to do awesome work; so work hard, listen to people, and get your ideas out there. I am now launching Artists & Instigators practicum-- and I've committed to make the "CO2 emission" of my job real, relevant change. You can learn more at http://artistsandinstigators.com.

Here' a recent interview Marc did with CNN:
Here's a recent ABC NEWS story about this: 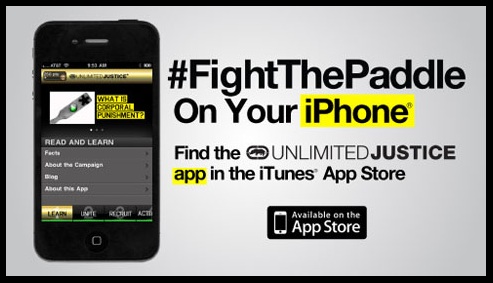