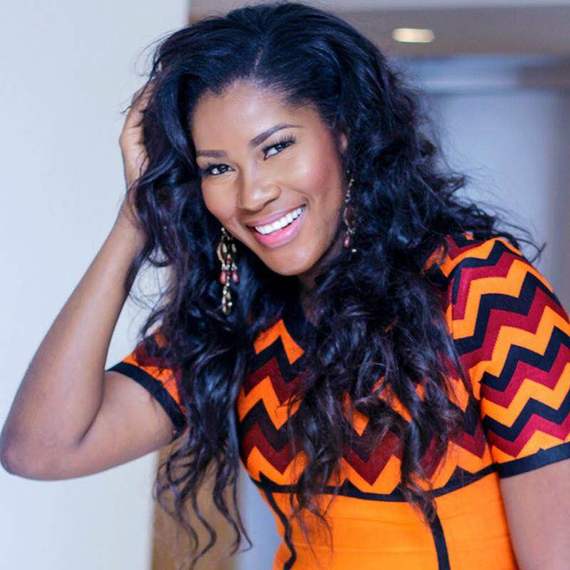 1) Can you tell me a little bit about yourself, your hobbies, passions, and dislikes?

I was born in Nigeria, and I'm a deep lover of my country. I was lucky enough to discover my passion for acting as a teenager and I've never looked back. Over the years, my love of acting has grown into other interests, such as filmmaking, with a strong desire to use my platform in order to drive positive change.

I love spending time with family and friends; I love travelling, discovering, and experiencing new things. I love cooking delicious meals, and I'm a sucker for a good fragrance. I have very little tolerance for mediocrity.

2) I know that you are interested in social issues in Nigeria. As an actress, how does this interest bleed into and influence your work?

I learnt a long time ago that film is often the perfect vehicle to provide education about social issues and to inspire social and political change. After the movie is over, the work of the viewer has just begun. They must go back out into the world and make changes. That is my biggest drive. Knowing the powerful influence I have, as an actress, is enough for me to yearn for roles that influence people positively.

DRY is inspired by the true-life stories of several girls I have met over the years. Since I first heard about Vesico Vaginal Fistula (VVF) as a student in the University, I embarked on a research, which took me around the country, and to other African countries, where I interacted closely with lots of young girls who had been forced into an early marriage and had the disease. Many of them shared their stories with me, which inspired the script for the film. I also met a very young girl, whose story, in particular, blew my mind.

4) How have you managed your film's reception, both from the general public's reaction, but also from the reactions of leaders and policymakers that may have seen the film to get a better grasp on the issue?

The response has been the same with leaders and policy makers. We've been privileged enough to screen DRY to some key African leaders who have been positively influenced by the message. When we screened the movie in Zambia, the First Lady who was in attendance related strongly with the message and was moved to tears. We also screened DRY some weeks ago in Gambia to an audience that included the country's Vice-President. I was glad to read in the news a short while later that Child Marriage had been banned in Gambia.

My biggest testimony is the fact that 'DRY' is moving the conversation around the world and shining the spotlight on the African girl child as well as the need to protect her. We are also taking the message of DRY beyond the screens and are carrying out some free repair surgeries on women with VVF through our Extended Hands Foundation in partnership with some corporate organisations.

5) How do you think that Nigeria can better address the issue of child marriage both at a policy level but also at a socio-cultural level, seeing as how there tends to be a disconnect between legal legitimacy and cultural legitimacy in the country?

Child marriage in West Africa is rooted in poverty and the overall position of women in society. Many families have no choice. When a wealthy man comes offering money, they will let their daughters marry them, even if they are young. Lack of education, entrenched religious and cultural practices, and limited economic prospects, push girls into the margins and into harmful early marriages.

Similarly, in communities where there are no laws against forced marriages, the girl child suffers. So yes, even though there tends to be a disconnect between legal legitimacy and cultural legitimacy on this particular issue, we need to address both.

In 2015, the Violence Against Persons Prohibition (VAPP) bill was passed into law in Nigeria, which prevents all forms of violence against vulnerable persons, especially women and girls, amongst other things. However, more needs to be done and more of such laws should be passed across West Africa. We need to increase awareness and address early marriage in the local communities as well as pay more attention to the education of the girl child. I strongly believe that education is one of the most effective strategies to protect children from marriage. When girls are able to stay in school, an attitudinal change can also occur towards their opportunities within the community.

6) In Nigeria, as in many African countries, 'Art' is inherently political. How do you think that the Nollywood film industry can continue to effectively campaign and raise awareness for social issues through films?

The campaign has already started and I'm glad that many filmmakers of today are thinking this way. With DRY, the focus was on VVF and Child Marriage, as well as its underlying social issues such as maternal health, poverty and inequality. This has made people more aware of such issues and it is shifting the conversation everywhere. More and more filmmakers are raising awareness through films and the response has been generally good. What I think we can do better in Nollywood is, improve the quality of our content. We should not compromise standards in any way. We must rise beyond the perceived thought that we do not make good quality movies and compete favourably with world-class film productions. When people watch a good film with a good message, the result is the same everywhere.

A good film can prompt you to look deeper into social justice issues and get involved. With the amplifying nature of media, filmmakers have a significant tool at their disposal. I strongly believe that art has a huge role to play in society and can be a catalyst for change and positivity if used in the right way.

7) Do you have any advice for young filmmakers, actors/actresses, and activists out there?

To become successful in anything, you need to first of all love what you do and have a strong passion for it. You also need to build up your skills, read widely, study your craft, and keep on setting bigger targets for yourself. Growth is a gradual process and you must aspire to it every day. This must be backed with a strong determination to succeed. Believing strongly that God has given you all the abilities you need, you can be anything you want to be.