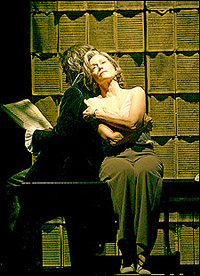 After 46 years, Oscar-winning actress Jane Fonda makes her triumphant return to Broadway in 33 Variations, a brilliant new play which is earning standing ovations nightly at the Eugene O'Neill theater. The play was written and directed by acclaimed playwright Moises Kaufman and features Fonda as a contemporary musicologist so obsessed with Beethoven that she brings him back to life for herself and the audience. The play is a time-traveling meditation on life, creativity, family and death and features the 71-year-old actress leading an all-star cast that also includes Tom Hanks' son Colin Hanks and actress Samantha Mathis as her daughter.

Keeping up with the times, Fonda has also taken to blogging at her new web site, www.janefonda.com. On her blog, she has been candidly and passionately chronicling her experience of doing the play, including photos and details of backstage interactions with famous friends such as Rosie O'Donnell, Lily Tomlin, Dolly Parton, Eve Ensler, Gloria Steinem, Robert Redford and Tom Hanks. She has even taken to twittering, with up to the moment and often entertaining anecdotes, such as the time her beloved little dog Tulea escaped from her handler and ran out on stage during the curtain call. These endearing and behind-the-scenes details entice you to want to see the play and be a part of the 33 Variations experience. 33 Variations is a special play not to be missed.

I had the opportunity to ask Jane a few questions about the play and her return to the stage.

Marianne Schnall: What drew you to doing this play?
Jane Fonda: It was unlike anything I ever read. I sensed this as soon as I had it before me. The membranes that normally separate life and death, past and present, are so permeable in this play. It seems to have a profound impact on audiences. Also, I feel it is very Zen: As my character learns through her investigation of why Beethoven wrote 33 variations on what has always been considered a mediocre waltz, when you slow down and take the time to really see something, it can become beautiful...what at first appears mediocre can be magnificent. As a result of learning this, my character learns to see her daughter with new eyes.

MS: What about it to you is so special?
JF: I am in the process of writing a book about aging for Random House and just as I began reading the script, I was writing about some of the things that "33 Variations" touches upon. In fact, I was writing about Beethoven and how he did his most profound work after he was deaf. Matisse did his greatest paintings when he suffered from macular degeneration. In a way, the play shows that even in the face of physical adversities and age, passionate commitment and inspiration do not have to wane. The challenges can force us to dig deeper.

MS: What does the play say about the creative mind and the artistic process?
JF: We are almost never permitted to witness the psychic costs of making art, the process of creation. Also, I feel the play speaks to the fact that true art never dies, always speaks to us through time and informs how we do life. Interestingly, the play also shows how Beethoven had to constantly face similar financial hurdles that artists do today...it wasn't easy then, it isn't easy now.

MS: How do you feel about the camaraderie of the rest of the ensemble that is working with you on the play?
JF: It's the best part. It is a true ensemble, a close community of the sort that rarely exists on a movie set. This is because we are together as a cast so much of the time, depend so much on each other from the intangible stuff like playing with the right level of energy and generosity within scenes to the real stuff like not forgetting your cues, your entrances and exists. Moises Kaufman is truly remarkable and I've learned so much from working with such a talented and gifted individual...he is a visionary.

MS: Ben Brantley of The New York Times said about your performance, "Jane Fonda is elegant, heartbreaking and fierce." How would you describe the artistic style or acting technique you've used for this role?
JF: I have not read the reviews and I cannot describe any technique. It just came rather easily. I have not found it especially challenging although there were days at the beginning of rehearsal when I thought I'd made a big mistake. Now I feel very at home on the stage. I love this experience a lot. Working with the cast and Moises Kaufman has truly been a remarkable experience.

MS: How do you relate to the character you are playing, and do you think other people will relate to her?
JF: I know other people relate to her because they tell me -- directly or in letters or on my blog. I feel I have much in common with the character -- so did my Dad in his tendency to be judgmental. Her passionate commitment to her search is something I understand very well.

MS: What does this play convey about the human spirit?
JF: Ahh, what a profound question! I think it shows the potential resilience of the human spirit; our unique ability to evolve spiritually right up to the end. I am not talking here about 'spiritual' in the religious sense.

MS: What do you most love about doing theater?
JF: The immediate feed back from the audience. Being in control of the moment as opposed to being at the mercy of a film editor. You either show up for the moment or you don't. It's up to you. I look out through the spaces in the set and see the audience before the show begins. I like to know them, sense them. Today, in fact, I chatted with the folks at the box office, lining up for their tickets before the matinee. If there are friends or celebrities in the audience I want to know about it. It heightens my -- what to call it? My anticipation for the moment I enter stage and begin to communicate...and in this play I do a lot of direct communicating with the audience. I like that. I am very used to that because I do a lot of public speaking which, I think, is rather unusual for an actor.

MS: There has been a very small group of Vietnam veterans protesting outside the theater. What would you want to say to the protesters?
JF: Put your energy into helping veterans, or getting mad at the ones who got us into that tragic war...through deceit and manipulation, just like Iraq.

MS: What have been some of the most interesting or memorable comments or observations people have been making to you about the play after they've seen it?
JF: I am amazed by the variety of reactions. For some it's the mother/daughter relationship. For others it's seeing someone deteriorate from disease that calls up their own tragedies For still others, it's the acceptance and even nobility that can come with death and dying. There's the whole musical aspect of the play -- a major part of the play and this inspires and informs many people. There are specific visual moments that are so unexpected and moving and people have commented to me about the affect on them of these different moments and effects. People seem to leave the theater feeling they've learned something. People are returning two and three times because they feel they haven't gotten all there is to get from just one viewing. There are many layers to the play.

For more information, visit the 33 Variations site at www.33Variations.com.