ISIS-affiliated hackers posted "wanted to be killed" lists late on Saturday that included the names of current and former U.S. government officials.

The hackers, calling themselves the "Islamic State Cyber Army," published what they claimed are names and addresses of people who have worked for the U.S. Defense Intelligence Agency, the FBI, the CIA, the National Counterterrorism Center, the National Guard and other American organizations and agencies. They also posted what they said are names, addresses and pictures of U.S military personnel who have served in Kuwait, Qatar, Iraq and Afghanistan. 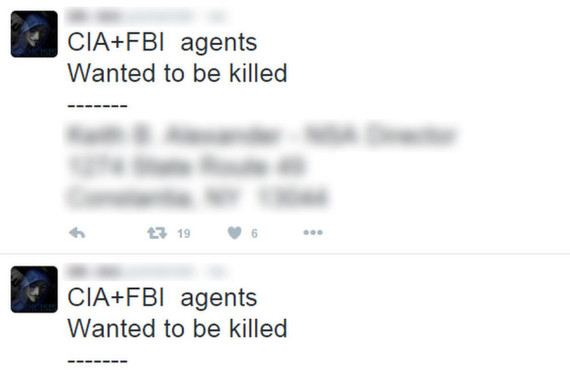 This isn't the first time ISIS allegedly posted information about U.S soldiers and officials. In August, social media accounts affiliated with ISIS called on supporters to carry out lone wolf attacks against American soldiers after at least two forums belonging to the terror group released what it claimed were the personal details of hundreds of U.S. military personnel and government employees.

A review of the names and addresses posted late Saturday showed that at least some of them were previously posted online, indicating that the hackers didn't dox the figures but recompiled already-available information. The hackers said the lists were posted in retaliation for a recent Anonymous attack that targeted ISIS-affiliated Twitter accounts and appeared to shut down one of the group's online forums for several hours.

The names on Sunday were listed alongside other threats. "Expect us tomorrow at 7 p.m Mecca time," a post on an ISIS-affiliated Twitter account said on Saturday. A video on another account that was allegedly produced by "hackers of the Islamic State" declared that any country fighting the group is a legitimate target. "We will spy on you and leak your (information) and take your money," the video, posted to a now-suspended Twitter account, said. "Yours and your families' information and secrets are not secure anymore."

Over the weekend, Anonymous said ISIS was planning attacks in Paris and at a WWE Survivor Series event in Atlanta, Georgia on Sunday, but then said in a later tweet it didn't know where rumors of the possible attacks came from. It was unclear if the lists were connected to reports about the allegedly planned assaults.

The Islamic State has waged a robust propaganda campaign over the last week following a string of deadly attacks that struck Paris. The hackers' campaign appeared to be a part of that effort, which has included a slew of threats directed at the terror group's western enemies.