The CEFAA, a government agency investigating unidentified aerial phenomena (UAP) within the department of civil aeronautics (DGAC) in Chile, has released a summary of its meticulous investigation into the relatively recent "AGA case." The acronym "AGA" refers to the prestigious Air Force War Academy (Academia de Guerra Aérea) in Santiago, Chile, which provides training for high level Air Force officers.

The sighting of unexplained lights in formation at the Academy was video taped on two cell phones. Due to technical problems, the videos are not accessible on the CEFAA website. I have been given exclusive access to the full case file, and permission to publish the videos for the first time.

Here is what happened: At about 7:45 pm on September 3, 2012, a paramedic and an emergency medical technician (EMT) stopped to fill up an ambulance from the Air Force Hospital at the fuel pump on the Academy grounds. A sergeant, responsible for overseeing the security of the facility, was assisting with the refueling. 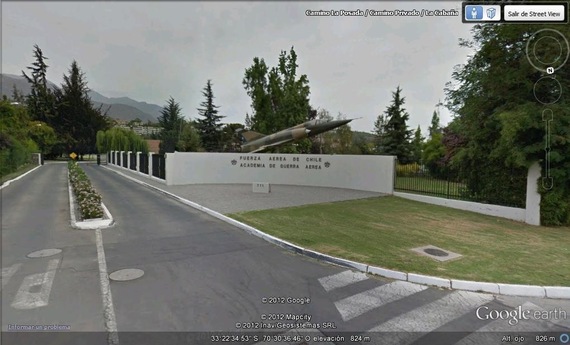 The entrance to the Air Force War Academy in Santiago, Chile (photo CEFAA)

Suddenly, they observed five lights coming over the Andes mountains from the Northeast, creating a horizontal formation and moving towards the Academy. At first, they thought this must be helicopters rehearsing for an annual military parade to take place later that month. However, as the lights drew nearer, the sergeant, who had spent 27 years in the Air Force, realized they were not helicopters. They made no sound and were clearly something highly unusual.

Startled, he ran towards the guard post at the main entrance and shouted the name of the guard who was inside. The ambulance driver and the EMT each pulled out their cell phones and began making videos of the strange formations.

The lights then descended even closer to the Academy grounds, and all three watched them change from a straight line into first a triangle, and then a circle, as they hovered nearby. The phenomenon then withdrew back towards the mountains and disappeared from view. The cameras were running for most of the display, until the batteries ran out. It lasted a few minutes. 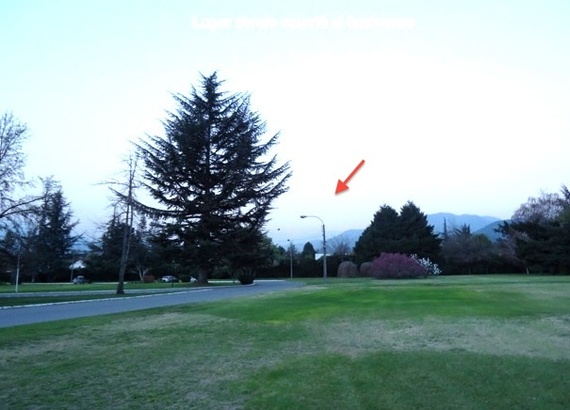 A daylight photo of the location of the sighting. The UAP came in below the tall tree to the left and were very close, according to the three witnesses. (photo CEFAA)

The following drawings illustrate the three formations -- a horizontal line, a triangle and a circle -- that the witnesses saw: 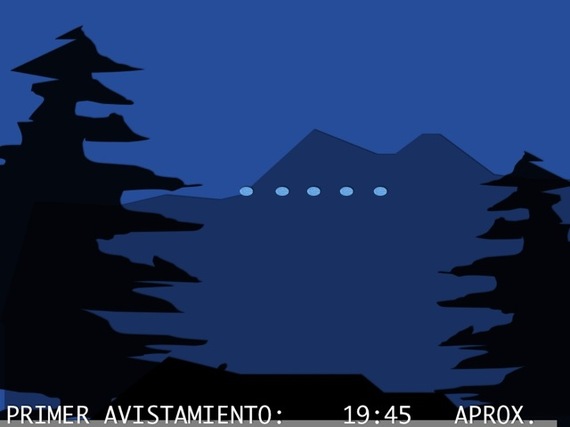 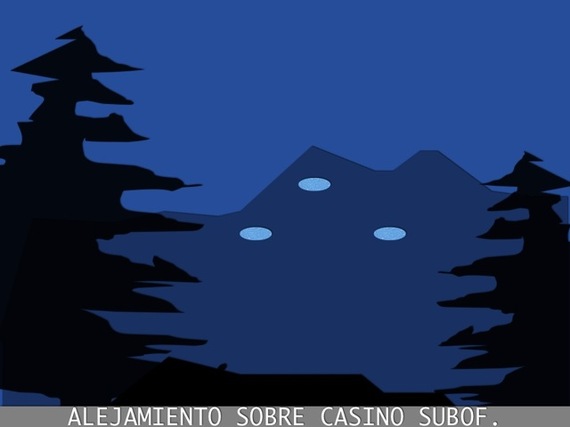 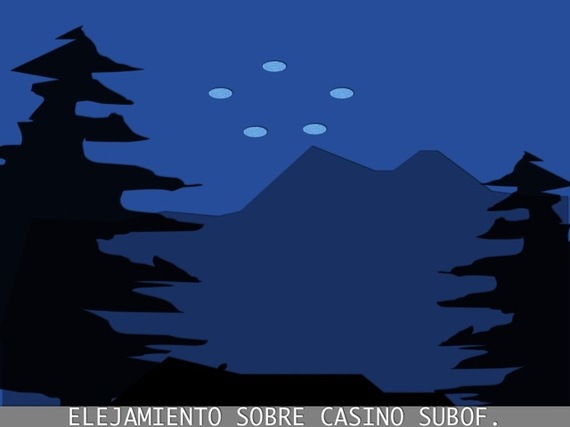 Right after the sighting, two high-ranking officers observed how shaken the men were by this event.

A retired Air Force general, who happened to stop briefly at the Academy within five minutes of the incident, encountered a very agitated sergeant. The general reported in writing that the sergeant asked him: "'Did you see the lights, General?' 'We had them right here on top of the Academy...five UFO's, red in color...here, right on top of us... General, I thought one of them was going to land here!'"

First thing the next morning, the Director of the Academy called General Ricardo Bermúdez, director of the CEFAA. He said he had received an urgent call from the men on duty the previous night and had arrived at the scene about fifteen minutes later. "The sergeant acted like someone who's seen something very strange," he told Bermúdez. "He also said he hadn't believed in those things [UFOs] until after what had just happened."

All three witnesses and others involved wish to remain anonymous to protect their privacy.

The Air Force and Army each assigned a psychologist to evaluate the witnesses the day after the event. Both concluded they were normal, reliable men who had clearly been subjected to a situation that caused them great stress. One report states that the sergeant was reserved in character, completely coherent and rational, and declared he had never had a similar experience to this before.

Shortly thereafter, General Bermúdez learned why the sergeant was so strongly affected.

Yes, he was worried that the UAP would land on the grounds, because it appeared to be very close. But there was more to his fear than this proximity. The sergeant told Bermúdez that after seeing the five lights approaching in a horizontal formation, he saw "a ship." It was not an airplane or a helicopter; it had no wings, blades or turbines to sustain it in the air, he said.

He went on. "It took me about ten seconds to shout to the people with me. The three of us started running, both men recording with their cell phones as I went towards the guard house to warn the man on duty." He saw the lights change into the other formations "right on top of the Academy. I went past, running right beneath them." He said the lights were red and spinning.

The corporal in the guard house, who just missed seeing the lights, reported that the sergeant told him on the spot that he had seen a ship. The sergeant appeared to be in shock. "He's dark-skinned, but that day he looked pale white," said the corporal. "His reaction was like something very serious had happened." And, he told Bermúdez, "the sergeant has a strong character, strict, military. Not the nervous type." It was understood by all involved that it would take something very alarming to evoke such an intense reaction from this professional Air Force veteran.

However, the ambulance driver and EMT did not see a ship, so this aspect of the case has no corroboration. And it remains unclear whether the lights on display were five independent entities or were part of one larger object.

The driver reported that the lights looked yellow at first, but then changed to orange and then red. When they got closer, he too could see them spinning. "They were round and they looked as big as the lights of a car and they were spinning on their own axis," he said.

He said they looked as close as the pine trees, and he was afraid. "It was like standing right beneath a street neon lamp. The only difference was that it was spinning."

The EMT supplied a similar report. "I guess they were some 50 meters away only. Either they were very big or very powerful...you could see the pine trees almost right beneath."

Before viewing the AGA video, I have to warn you that a simple cell phone does not do very well in capturing lights at night, and what the eyes see can look very different. Here, the videos don't come close. "While I watched the cell phone screen, there was very little that I could see, almost nothing," the ambulance driver said. "But, when I looked directly at them, they were very clear."

The cell phone makes the UAP appear smaller and further away than it appeared to the naked eye. Yet the videos also recorded the reactions and descriptions of the witnesses in real time, which is extremely important.

Here is much of the EMT's spontaneous narrative from his video, rendered with great excitement, and with pauses between each phrase:

They're UFOs! Damn I can't capture them in my camera! Look at the formation they have now! I am seeing a formation of five luminous objects, that my cell phone doesn't seem to catch. But if you were here you would see them perfectly!

Oh my God, look! They are coming down! I can't see anything in my camera. Over here look! Before they looked super big. Now they are getting dimmer. Wow, this is amazing!

A series of stills were extracted and enhanced by the laboratory of the Chilean criminal police department, the equivalent of our FBI. The triangular formation was the clearest on both videos. 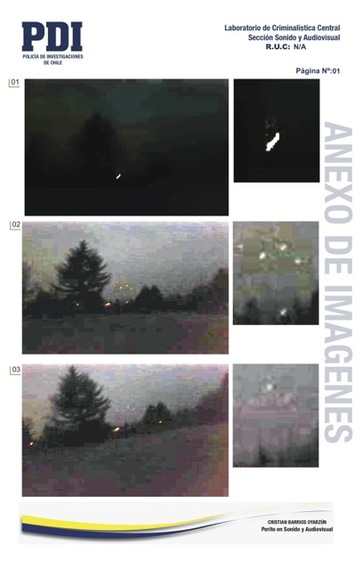 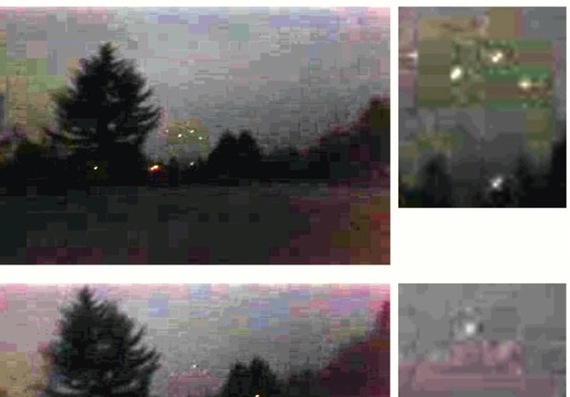 The phenomenon clearly demonstrates intelligence. How do you best form a triangle out of five lights? If you look at the closeup of the triangle on the far right above, you can see that the left and upper points of the triangle are composed of two lights that have moved close enough together to form one point. I find this quite an astonishing solution to the problem.

Below is an excerpt from the EMT's video, the longest and the clearest of the two. The triangle is visible during the earlier part, but it is harder to see the phenomenon in the second half. Note also the shouts of the sergeant calling for the guard. The two bright lights at the bottom of the tree (as seen in the still above) are houses. Click "full screen" to see it better, and tilt the screen to maximize the contrast.

© This video is the property of the CEFAA, posted on a private page. It may not be copied or embedded anywhere without permission.

The CEFAA has left no stone unturned in trying to identify the source of this UAP. The Santiago Radar Control Center provided all primary radar recordings of aircraft flying in the area at the time. No known traffic could account for the lights in formation. In addition, officials from the nearest airfield stated they had no air traffic that evening.

Since the phenomenon was seen below the peak of the mountain, it was too low to have been airplanes. And the minimum vertical distance allowed between adjacent airplanes is 2,000 feet; the horizontal minimum is two miles. 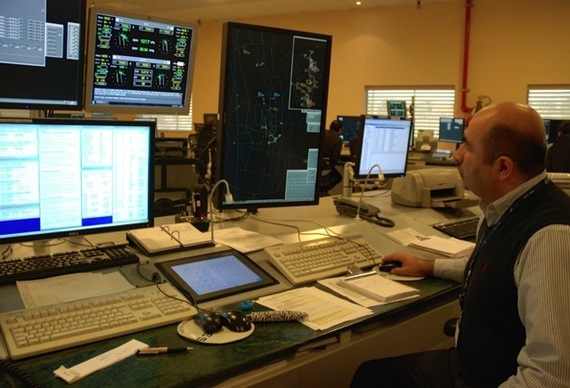 The Meteorological office contributed a full report of conditions at the time and ruled out anything related to weather. The Air Force photogrammetric service mapped the area and determined that there were no existing roads or tracks behind the location that would allow for any possibility of car lights, lanterns or hunters signals. The uniformed police combed the area looking for additional witnesses, but none were found. They ruled out any sort of laser or light displays; in any case, these anomalous lights had no beams.

The phenomenon remains a mystery despite the CEFAA's lengthy investigation, involving a host of experts. All known possible explanations have been eliminated.

What was it that flew in silently over the Andes, displayed three distinct formations from five spinning lights while hovering over the grounds of an Air Force Academy, and then dimmed, retreating back over the mountains? The CEFAA Scientific Committee concluded by consensus that this was an "anomalous luminous phenomenon" of unknown origin. 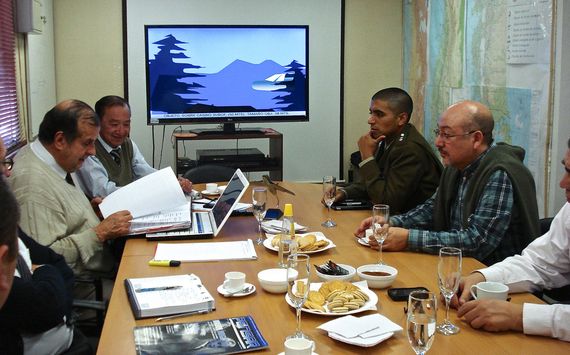 One of many committee meetings at the CEFAA office to discuss the AGA investigation. To the left is General Ricardo Bermúdez (in the white sweater) and Jose Lay, CEFAA international affairs director, who appear enthusiastic. Across from them, stunned and stoney-faced, are a police representative, a university astronomer, and a DGAC meteorologist. Also present were an Air Force colonel and a nuclear chemist. (photo CEFAA)

The case illustrates the remarkable cooperation that occurs in Chile among all government and military departments, technical experts, and scientists of various specialties in the investigation of UAP cases. None of them question the validity of the process or the reality of the phenomenon under study. They give freely of their time and resources, so the agency does not cost much to run. And the law mandates that all information be made public.

If only the U.S. would follow suit, we could be on our way towards solving the UFO question once and for all, in cooperation with many countries around the globe.