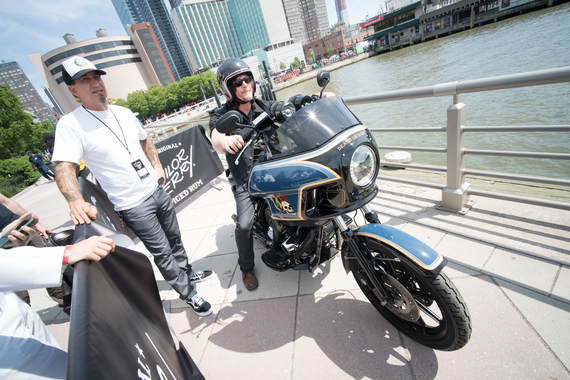 New York City's Fleet Week roared to a close yesterday as The Walking Dead actor Norman Reedus rode a custom motorcycle onto the stage at the Sailor Jerry Spiced Rum block party, and toasted the troops in attendance.

The custom bike Reedus rode in on was commissioned by the rum company - built by Chris Richardson of LA Speed Shop and designed by Buck Wild -- and will be auctioned off to benefit the Norman Collins Initiative at The Aleethia Foundation, which supports wounded, injured and ill service members. More than just a nickname, Sailor Jerry was indeed a Navy man, but is best known for his contributions to the tattoo world, and his signature designs of the American Traditional style. He was also a motorcycles buff, hosted a radio show, and was a bit of a hellraiser - facts that, taken together, said Reedus, make the Sailor Jerry a perfect partner for a Fleet Week party.

Following his toast, and pausing for photos with servicemen and servicewomen - and borrowing a hat from one of them - Reedus sat down for an exclusive interview with Huffington Post. In the conversation that follows, he discusses his special relationship with fans in the military, what he learned on the road filming his new show, and his connection to Sailor Jerry. 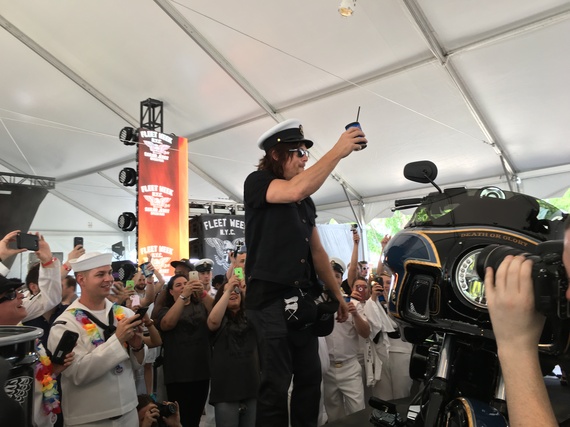 How was the ride in on that bike?

"I took it for a test drive yesterday and went around Times Square, and got a bazillion looks. It is such a well-made machine. It is solid, and it sounds cool. Chris Richardson did such good work, and is super talented."

I know it is being auctioned off for charity, but did you almost want to keep it?

"Yeah! I mean, I've got five bikes right now, but it's such a pretty bike. I would ride it, of course, but it's for a good cause and I don't want to take away from that. I want to see some veteran cruising down the freeway on it."

Talk a bit about the relationship between you and the fans in the military.

"It's fun. It kind of started with The Boondock Saints, which is a big cult film. A lot of military guys like that film. I did a USO tour through Djibouti, Bahrain, and Dubai, and a lot of those guys and girls told me they quote that movie on the field. That is a big deal, and I have a good relationship with them - as I do with cops, and firefighters. I'm a fan of theirs."

Your new show, Ride with Norman Reedus, debuts in two weeks, so is this motorcycle entrance and toast to the troops something of unofficial kick-off to that?

"In all honesty, this event happened before I knew the release date of the show. If I wasn't even doing that show, I would have done this anyway. It was a happy coincidence, but a lot of people in the military ride bikes. And we're all friends."

Norman Collins, aka Sailor Jerry, had an independent spirit, was a serviceman, an artist, into bikes, etc. Is there a kinship between the Normans?

"Well, first off, there is that kinship because his name is Norman. There's not a whole bunch of us! But yeah, tattoos, motorcycles, rock 'n' roll, it all goes together. This event and Sailor Jerry is all kind of a perfect storm."

You're also a photographer, and have a book out of your work [The Sun is Coming Up ... Like A Big Bald Head]. Is your work as an artist something you want to be part of your legacy, like that other Norman?

"I've always had a weird connection with that word: artist. From my point of view, you live your life as an artist. You don't have a life, and then do artwork. Hunter S. Thompson lived it. Ernest Hemingway lived it. Norman lived it - not this Norman, the Sailor Jerry Norman. He's known for not just his artwork but how he lived his life, and how he was true to his roots and who he was. He was honest. It is very different than a person who has a different life, and all the sudden does artwork so he's an artist. I think you got to live it, and he lived it. That's a testament."

I'm sure you've seen tattoos of your characters on fans, but is there any of your work you especially like to see on people?

"Oh, man. It's all different. You see tattoos of me, but they're either as Murphy MacManus, or there's Daryl Dixon. I don't know. My proudest thing is my kid, but I think it'd be weird to see my kid tattooed on people. I would probably freak out. It is all different, but if you appreciate anything I do, and it means something, and you tattoo it on you? High-five, I'm with you. One particular thing? I don't know; I'm still making things so I don't know."

In Ride with Norman Reedus, you hit the road to explore biker culture, stop at motorcycle shops and tattoo parlors, visit BBQ joints, and so on. What have you learned on the road interacting with people across the country?

"I learned tons of things. My favorite part of it of the show is it's not scripted, and off the cuff. You meet people randomly, and they become part of the show. I like the idea of learning something new from people who aren't in my world. With people who don't have the same job. I am humbled all the time. I will meet some old guy and his wife, and they've been traveling the country on a bike for months, and having the greatest time in their retirement. I'll learn something from them."

Finally, Norman Collins meets Norman Reedus. I know you like the rum, so what's the preferred Norman Reedus way to drink Sailor Jerry?

"It would be something straight, maybe on the rocks if it's a hot day. But if I had ever met him, I would shut up and listen. And whatever he was having, I'd be having."