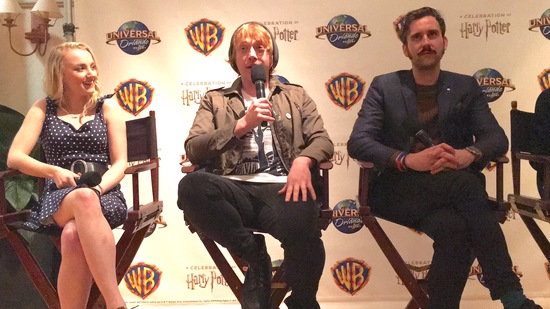 Rupert Grint was 11-years old when he was cast as Ron Weasley in Harry Potter and the Sorcerer's Stone in 2000. Now, it has been nearly 16 years since he first landed the job, and almost five since his final turn as creator J.K. Rowling's character in 2011's Harry Potter and The Deathly Hallows - Part 2. And now he is sitting across from me - and alongside his similarly-aged former castmates Matt Lewis, Evanna Lynch, and Katie Leung -- in a smallish publicity meeting space at Universal Orlando theme park.

Outside, the third Celebration of Harry Potter event has kicked off, and fans, decked out in Hogwarts house robes or other costumes, are hoping to catch a glimpse of the actor and his cohorts.

These actors are used to it. For most of their lives, they've been associated with one of the most popular movie and book franchises. They grew up in this world; screaming fans, autograph seekers, speaking to crowds of thousands, cameras in their faces. This is nothing new, nor are most of the questions they'll likely be asked over the course of this weekend.

But what I enjoy as I sit down to speak with the group is how much these adults are unlike their characters (except for maybe Lynch, who is still delightfully Luna Lovegood-esque). It seems obvious, but we've such a tendency to want to lock actors into their iconic roles. It is challenge breaking out of that, especially when you're remembered as being a cute, or awkward, or weird, or chubby kid on screen. Yet each has grown up, and gone on to other acting gigs and new pursuits.

With that in mind, what follows is a fun, funny conversation -- not with Ron Weasley, Neville Longbottom, Luna Lovegood, and Cho Chang, but four performers being chatty with one another as they reunite for a weekend celebration. We talk about how much Harry Potter trivia they retain, and whether they'd be reluctant to join another franchise such as Star Wars. And, in a hilarious exchange that might border on scandalous for diehard fans, we joke about their character's future, which goes into dark territory for Ron and Co.

First up, the Harry Potter universe you grew up in in expanding, with a prequel movie and stage production. Do you have any advice to the cast of the Fantastic Beasts and Where to Find Them or Harry Potter and the Cursed Child as they head into this world you grew up with?

Matt Lewis: I don't know how much advice I could ever give anyone. The people who have been cast, as far as I'm aware of, are very, very experienced. They don't need any advice from me. But I guess just enjoy it. It has been a hell of an experience for me, and everything associated with it: the people, the fans, the environment. It was a good gig to be on! Just enjoy it because there's nothing else like it, literally in the world. It is unique.

Rupert Grint: I think it's going to be a very different film, I think. I don't know much about it, but as Matthew said, just enjoy it. Go with the flow.

Evanna Lynch: I'd say trust David Yates, as well. He always knows better on the film. Sometimes I would go, "Oh, I'm doing terrible, I'm messing up." He would come along and suggest something tiny, and it would change everything. He is very clever. And he is the one who has transitioned from one to the other. He has the whole picture.

The fans have an encyclopedic knowledge of these books, but that doesn't mean you do. What's a question that has stumped you about this world?

Lewis: Every question. [Turns to Evanna] But you have quit the encyclopedic knowledge of the universe?

Lynch: Yeah, I don't think I've been called out, luckily. I feel like we're in freefall now. I don't like not knowing things as a Harry Potter fan. I don't like there is a film before there's a book so we can't surmise and learn things. I feel very much adrift. That's the power of the fan that you know everything, all the details!

That's what makes us a good nerd.

Lynch: Yeah, a good nerd, exactly. And they've taken that away from us. It is very awkward.

Katie Leung: There have been but I can't remember because there have been countless questions where it's been like, "Evanna, you first?" Oh right, that's what we're talking about.

Lewis: The universe is so rich, and so big and vivid, that being a fan as a kid, absolutely. But I read the last book years ago and naturally just forget things. You get asked the simplest question like, "Who is the caretaker?" I go, "I know this..." [snaps fingers]. It's stuff like that. You just forget. It is Filch. I do know that!

Grint: Yeah, I was doing a pub quiz and there was a Harry Potter question. I think it was, "What's Harry's Patronus?" or something like that. I had completely forgot. Everyone turned to me, like, "Oh yeah, we've got this."

Grint: A stag. Of course.

You could make it up and no one would have the moxy to challenge you on that. You could just say it's a goat.

This was very much your childhood, and your job growing up. If you had the opportunity now to enter another franchise that would consume multiple years - like Lord of the Rings or Star Wars - would you be reluctant to join that production?

Lynch: No. I loved it. I love the family feel, and the idea you can get deeper into your character over a year. I have been on films that were just three or five weeks, and sometimes I've been like, damn, I'd only just started to get into it. It was nice to have something you could develop it, and learn and grow alongside your character. And I just loved the family thing. I got very comfortable there.

Lewis: Hey, if Star Wars come knocking on the door tomorrow, I'm not going to go, "Um no, guys, I'm sorry, I don't want to do four films, it's fine." No, of course not. I'd think about it, and I love Star Wars, etc. But there would definitely be a bit of trepidation in joining a big franchise again for that amount of time. Just simply because I'm really enjoying the diversity of the roles I've been given recently. Playing a character is great, but I love the process of finding someone, finding a character, creating and drawing it up. And trying to figure out what makes that person tick. When you do something for however many years, it can start to become - I don't want to say mundane because it was never boring on the films. But you kind of lose that spark a little bit you get in that first day of school, or on a new job. It is exciting. And I've gotten that so often in the last couple years, I'd be reluctant to give that up.

Leung: I kind of agree with Matt. If it goes on for any longer than a certain period of time, you do get really comfortable and feel very safe. Having done all the projects after Potter, it has been a few weeks, a few months for a project. You do really get to know a character, and it is wonderful knowing that, once you stop filming or being on stage and being that character, it essentially dies. So I quite like that. Of course, it depends who the character is you're going to be playing. But yeah, if it's Star Wars ...

Grint: I don't know. I don't think it's put me off. There's pros and cons. Harry Potter could be at times quite suffocating. It did take up our whole lives. So yeah, I suppose there would be tiny bit of reluctance. Now that I'm out of it, I can see beyond it and it's nice to have a real life, and do things you want. There's a lot of freedom in that. But yeah, I think it all depends on the material. 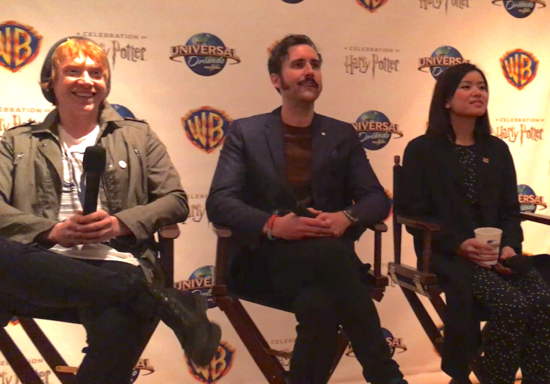 If J.K. asked you where you'd like your character to be off to, what would you say? Swing for the fences, or go as crazy as you'd like with what you'd be doing in that universe.

Grint: [laughs] I would expect Ron has probably divorced Hermione already. I don't think that relationship would have done very well.

Grint: Yeah. Exactly. He's living on his own, in a little one-bedroom apartment. He hasn't got a job.

Ron is on Tinder doing horribly...

Lewis: Living in a one-bedroom studio apartment all alone, doing nothing. He lives in Kings Cross, right in that area.

Ok, that's a high bar, or a low bar but a great answer. What about the rest of you?

Lynch: I think Luna would have an adventure documentary series. She becomes a naturalist, and I think she'd travel the world and have a show. I could be a wildlife narrator.

Lynch: Yeah, and she would prove all her creatures exist. Everyone is so dubious of her, and I'd like her to show they're real.

Katie Leung: I reckon Cho would probably have become a really successful entrepreneur, and really cold and ruthless.

Leung: Yeah, she's cried all the tears she could cry, and now she's become real cold and heartless.

Lewis: This is dark! I love this!

What kind of entrepreneur? She runs a tech company? Or a developer who tears down bachelor pads like Ron's?

Matt, are you going to keep this dark?

Lewis: Oh god. Neville works at the school, right? So he's a professor, just enjoying that. Maybe he's trying to get Ron a job, man. And he keeps throwing it back in his face, like, "I don't need your help, Neville; Jesus, just leave it." And I'm like, "Come on, it's fine, we'll sort it out, just trying to get you back into the fold." Yeah, him and Hermione don't see eye to eye because I've taken Ron's side in the relationship, obviously. They've got everyone split off, friends wise. I don't know who you guys chose? Did you choose Hermione?

Lewis: Are you Ron as well? Jeez, Hermione is thin on the ground with friends!

Lynch: I think Ron would need more help. Hermione would handle herself better.

But Ron could have a job as a replacement for Mr. Filch

Lewis: Yeah, I'll get you in as the caretaker of the school, man. We'll sort it out. Don't worry about it.

Lynch: And we'll get you back together.

Real quickly, what is the question you're guaranteed to get from fans at the Harry Potter Celebration?

Grint: Do you still see Daniel and Emma?

Lewis: Why have you got that stupid mustache?

Lynch: Just, how are you liking Florida?