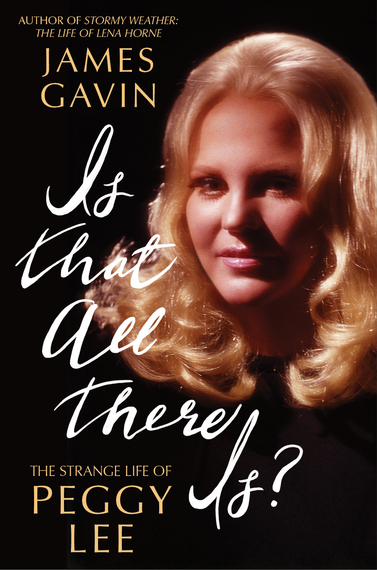 On November 11, Simon and Schuster imprint Atria Books published Is That All There Is? The Strange Life of Peggy Lee, James Gavin's comprehensive and immensely readable biography of Peggy Lee, one of the greatest female vocalists of all time. Stargayzing recently sat down with the author to learn more about his newest project and lifelong fascination with the great Peggy Lee.

Stargayzing: For those readers who are unfamiliar, can you tell us a bit about Peggy Lee and contextualize her impact on popular culture?

James Gavin: Peggy broke through as a big-band singer at the height of the swing era in the early '40s, a time when popular singing was still in its adolescence. With all that roaring brass behind them, and just one vocal chorus per song in dance tempo, band singers didn't have much room for subtlety. Peggy Lee, like Frank Sinatra (and Bing Crosby before them both), helped change that. Most of the time, she sang so intimately and with so much nuance that you found yourself leaning in to hear her. Peggy made you come to her. She was one of the ultimate minimalists in pop. And she wasn't the girl next door. Underneath her enigmatic, Mona Lisa smile were strains of something distant, mysterious. She had a Mae West-ian sexuality about her, yet at the same time she withheld, just like Lauren Bacall, James Dean, Chet Baker, Montgomery Clift. But one sensed something explosive beneath that placid surface. That sort of aura--sensitive yet somewhat inaccessible--has always been very seductive to young people. Certainly Peggy has fascinated many prominent women in pop, including Dusty Springfield, k.d. lang, Madonna, Petula Clark, and Diana Krall.

Stargayzing: I know that you have great knowledge and insight into both pop and vocal jazz music. What in your opinion is the difference between a pop singer and a jazz singer and how would Peggy Lee reflect that distinction?

JG: The great Annie Ross, who at 84 is singing every Tuesday night at the Metropolitan Room in New York, gave me my favorite definition of jazz: "rhythm and feeling." Unlike Ella Fitzgerald, say, Peggy didn't improvise much; usually she sang the tunes as written. But whereby the pop singers of her day, let's say Doris Day and Patti Page, had solid musical values, Peggy had something extra--namely, fantastic time and a swinging pulse that made her medium and uptempo numbers seem airborne. On one of her classic albums, Black Coffee, from 1953, Peggy sings "My Heart Belongs to Daddy" against a wild double-time quartet arrangement. She sings it straight, but her jazz phrasing knocks me out. I've never heard a musician speak of her talents with anything but awe.

Stargayzing: In the process of creating this book, what did you learn about Miss Lee that surprised you?

JG: The degree to which she lived in a fantasy world in order to escape aspects of her life that she couldn't handle. The amount of her story that she had simply made up, with no clear sense of where fact and fiction diverged. The depths of her anger, her fear, her pain. The almost lifelong self-destructiveness that ran on a parallel track with her ironclad, North Dakota-bred survival instincts. All this percolated beneath the surface of her singing. Long before I knew the specifics, I felt their force in her work.

Stargayzing: You have written extremely well-received biographies about Lena Horne and Chet Baker and now, Peggy. Is there a common thread that drew you to these three individuals?

JG: Oh, indeed there is! I'm very attracted to stories of struggle, conflict, and emotional darkness that find expression in people's art. I want to be moved; if I'm not moved, I'm not interested. And all of those artists move me to the core. The interesting thing about Peggy is that, for all her darker dimensions, all the suffering in her life, she is viewed primarily as sly, witty, sexy, and triumphant. No Billie Holiday she, although she worshipped Billie and copied her for a time.

Stargayzing: What Peggy Lee album would you recommend to someone who was unfamiliar with her music?

Basin Street East Proudly Presents Miss Peggy Lee, recorded live in 1961 at her longtime New York headquarters, captures all her colors. The torch songs are so sad; the swingers swing hard; the love songs are intensely romantic and delivered in that confidential tone that came straight out of the bedroom. That record has a tremendous crackle and energy about it.

Stargayzing: Many people might be surprised to learn that Peggy Lee was also an accomplished songwriter. Was that something she had always done or was there a catalyst that pushed her toward not only interpreting a song but collaborating in its creation?

JG: She had begun writing song lyrics as a girl, but plunged into it seriously around 1944. She was on brief hiatus from her career and living as the newlywed wife of her ex-boss Benny Goodman's former guitarist, Dave Barbour, and as the mother of their infant daughter, Nicki. She was home and getting creatively frustrated, and found herself a new outlet. Singer-songwriters outside of blues and R&B were rare then. Peggy gained great respect as a lyricist, especially when she collaborated with Sonny Burke on the songs for Lady and the Tramp.

JG: On a personal level, her life was sheer lunacy from the first breath to the last. Some of her predicaments were hilarious; others bordered on tragic. Like so many of the great songbirds, she sang about romantic love as knowingly as an oracle, but usually lacked it in real life. As we all know, career-obsessed, self-obsessed artists, particularly women, tend to go wanting in the LTR department. Professionally speaking, her art is profound, and it was so much fun to explore. She had a deep, multi-layered, sometimes bizarre creative process. Technique, preparation, and heartfelt expression were intimately entwined for Peggy Lee. She knew what she wanted, and her instincts were usually dead-on.

Stargayzing: What could young singers learn about their craft from listening to Peggy Lee?

JG: Young singers today are coming up in an era when commercial pop music has been nearly stripped of its humanity. Autotune is an almost mandatory part of production. Oftentimes concert audiences watch pop stars on video screens as they lip-synch to tracks, surrounded by smoke-and-mirror distractions. Peggy needed none of that. She was a woman at a microphone, backed by musicians. With the subtlest of means she could make you feel almost anything she wanted. She knew the power of softness, of silence, of restraint. Yes, she was a master of stagecraft as well as vocal craft, but more than anything, her singing was a search for truth. It made a heart-to-heart connection. Isn't that what a singer should strive to do?

Stargayzing: You chose to name the book after one of Peggy's most enduring hits, "Is That all There Is." What is it about this song or its title that made it the most fitting way to sum up the book you've written?

JG: That masterpiece by Jerry Leiber and Mike Stoller has been interpreted in many ways. It asks probing, existentialist questions about the meaning of life. For me, "Is That All There Is?" is about a feeling that haunted Peggy--an emptiness in life that nothing could ever fill. Even the worst traumas in Jerry Leiber's lyric, from the burning-down of one's family house (which Peggy had, in fact, experienced twice as a child) to the loss of the love of one's life, seem somehow anticlimactic. To me the key line of that song is: "And then one day he went away, and I thought I'd die--but I didn't." Not even the worst imaginable heartbreak had delivered as expected. Other listeners have pointed to a never-say-die philosophy in that song, which Peggy certainly had. But she sings "Is That All There Is?" with a hazy numbness that leaves its ultimate meaning to our imaginations. How could I have named my book anything else?

This interview was originally published in an expanded format in Stargayzing.

Visit jamesgavin.com for more information about the author.