Beginning this weekend on August 20th and running for 2 weeks through September 3rd, thousands of people will gather in Washington DC for Stop the Pipeline! to protest the proposed Keystone XL pipeline from Alberta, Canada to Texas. The 7 Billion dollar project has been condemned by environmental groups around the world, leading scientists, and policy makers. The pipeline would bring 900,000 barrels of oil produced from dirty tar sands in Canada to the insatiable US market every day. Oil produced from tar sands is the most environmentally devastating form of carbon fuel yet devised resulting in 3 times the carbon emissions of conventional oil products on a per barrel basis. Lead organizers for the DC event are author/activists Bill McKibben and Naomi Klein with delegations attending from across the US and Canada. As Daniel Kessler from the Rainforest Action Network (RAN) said the goal of the White House sit-in is for "President Obama to stop the pipeline. It's his decision if the Keystone XL will be approved. The president had very lofty rhetoric when he was running for office about climate change, and now is the time to make good on his promises."

At the forefront of environmental activists/authors is Terry Tempest Williams one of the great American artists whose work defies simple categorization. She has received numerous awards for her writings and activism, testified before Congress, been jailed for civil disobedience, and continues to take a leading role in environmental justice issues.

JC: You recently told me that you firmly believe in "taking your anger and turning it into sacred rage". Does civil disobedience qualify?

TTW: The act of civil disobedience is the act of taking our anger and turning it into sacred rage.
It is a personal and collective gesture of resistance and insistance.

JC: The last time there was a large gathering in DC on climate, Capitol Climate in '09, we were focused on a large scale act of civil disobedience. That time the authorities made certain there were no arrests and Congress suddenly announced the day of the march that the Capitol Power plant would be converted from coal to natural gas, a clear victory. Since then the climate crisis continues to accelerate with no end in sight. There is always hope, but do you feel at this point that by working within the system the changes we need to preserve a stable hospitable climate can be effected?

TTW: I think we need to work within the system of government to foster legislative changes, as well as outside the system putting pressure on government and law makers to realize the muscle behind this climate change movement. And it is building, becoming stronger all the time. The climate change movement is a river overflowing seeping into every nook and cranny. American policy on climate change is a dangerous eddy, "the Room of Doom", we see in Westwater Canyon on the Colorado River. Our politicians and judges and corporate moguls need to know they are not only being watched, but being made accountable. Democracy demands participation and we are fulfilling our responsibilities as citizens to respond -- on the streets, in the voting booth and with our pocketbooks and in the case of Tim DeChristopher, with our bodies. It is important to remember
all true change begins at the margins and moves toward the center. This does not make the climate change movement marginal, it makes it muscular, organic, with a true movement toward the center.

JC: How would you define abundance?

TTW: A Bison -- America has a history of destroying what is abundant, what is generous, and strong.
We forget the nature of true power. The power within is abundance. The power without is greed. Greed is a deprivation of abundance, a hoarding, a constriction of energy. Abundance is an expansion of energy. Abundance is a form of gratitude, a generosity, a modesty, a bow toward
others -- what we can give, what we can share, rather than what we can take. Abundance is rooted in community, not individualism. Abundance is what is before our eyes, but we cannot see when we
are blinded by greed. Greed says there is never enough. Abundance says there is more than enough. Greed closes the door behind itself. Abundance opens the door for others.

Abundance is a dance with reciprocity -- what we can give, what we can share, and what we receive in the process.

To engage in civil disobedience is to feel the abundance of courage, the gratitude for a democracy that still invites us to speak from our hearts, to act from our conscience and have faith in the consequences of moral action. Abundance is a form of consciousness.

JC: What can people do who can not personally travel to DC in the next two weeks?

TTW: We can travel to Washington, D.C. mentally, create an image of support to those who can be there on the front lines physically. We can call attention to this action by writing letters to the editors of our local papers. We can gather at our own public squares and parks. We can support those organizations and individuals who can be there, spiritually, emotionally, and financially. We can
write Congress and let our lawmakers know that we stand in solidarity with those committing
civil resistance. We can participate in building this climate change movement, each in our own way, each in our own time with the gifts that are ours.

We can become the fire of hopeful action that burns through corruption and complacency.

We can be the river of concern that cools our sweltering planet.

And we will be the voice of resistance that says yes to a more compassionate way of being
in the world and face those who say no with the force of our steady gaze.

JC: At what point do we take responsibility for creating our future?

TTW: We can no longer wait for someone or something to save us from the predicament that is ours.
We must look in the mirror and say if I want the world to change I must change myself. We can begin here. The revolution is not something outside of us, but inside us, begging for our engagement every single day. 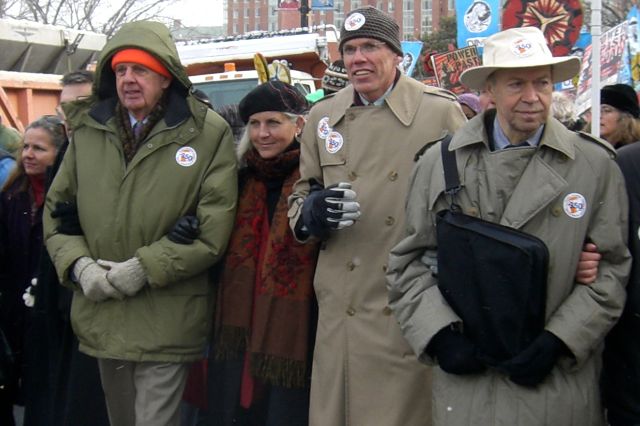