In a Huffington Post exclusive, we can announce that the Fourth is returning for the 50th. In the biggest news about the Doctor Who 50th Anniversary Special since David Tennant's appearance was announced last spring, actor Tom Baker revealed in a recent interview that he would be in this Saturday's 75-minute special.

"I am in the special," said Baker. "I'm not supposed to tell you that, but I tell you that very willingly and specifically; the BBC told me not to tell anybody but I'm telling you straightaway."

When asked to confirm, a representative from the BBC stated had this to say: "As with William Hartnell's recent appearance in the last season finale, anything is possible in Doctor Who. But nothing is certain."

Baker played the fourth incarnation of the time-and-space traveling alien Time Lord, and is often named as the best version of the Doctor character since the show premiered November 23, 1963.

When critically wounded, the Doctor can essentially regenerate into new bodies. The concept allows someone new to take assume the same character when an actor departs from the role. And Baker's portrayal with his quirkiness, sense of humor, wild hair and exceptionally large, multi-colored scarf made him a fan favorite out of the 11 actors who have so far assumed the role.

He is also the only classic Who actor confirmed to be returning for the special alongside current Doctor Matt Smith and his predecessor Tennant, both of whom (along with Christopher Eccleston) performed as the character in the series revival following a nearly nine year hiatus. 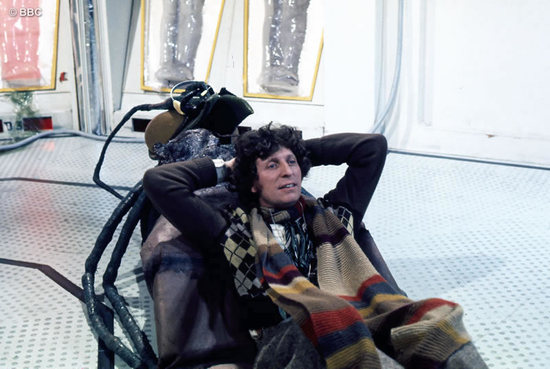 Titled Day of the Doctor, the anniversary special is written by notoriously tight-lipped showrunner Steven Moffat. Though details of the 50th have been closely guarded, the plot somehow has current Smith teaming up with Tennant, as well involving villains the Zygons (first introduced during the Baker era), Daleks and the Time War. Additionally, John Hurt will be appearing as a version of the Doctor introduced in May's Season Seven finale. The special will be simulcast in as many as 200 countries and will be shown in 3-D format in select theaters.

Baker's confirmation also prompts the question of whether other former living Doctors Peter Davison, Colin Baker, Sylvester McCoy, Paul McGann or Eccleston might also make appearances. This has been roundly denied by the BBC previously. However, McGann, who played the Eighth Doctor, did appear in the Doctor Who minisode "Night of the Doctor," which debuted online last week. And at least Tom Baker's scarf is seen in the special in some sort of a museum, worn by a woman who may be the character of the "Curator," who collects paintings from the character's adventures.

As far as how the Baker will figure into the story, the actor didn't say but did call the circumstances of his character's appearance in the special "extraordinary."

"It worked out very well, I think, judging by the reactions of the technicians," he added.

Whatever the rest of the details, the actor's return is monumental to the franchise. And it is apparent that Baker himself is happy to return. He calls the performance "the high spot" and "loveliest professional experience" of his life.

And it was a role he says he actually embodied.

"I identified very much with the character of the benevolent alien who wanted to heal the wounds of the silly people who couldn't get on together."

"I was Doctor Who before I got it and I remained Doctor Who since I did it," said Tom Baker. "There wasn't much difference except apart from the miraculous aspect of being able to disappear and reappear, apart from the mechanical dog and beautiful assistants and Daleks -- it was very much like my life."