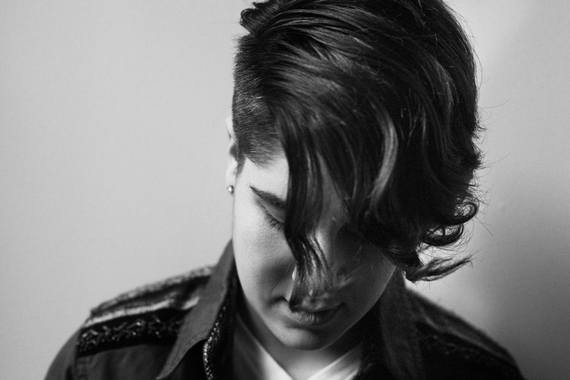 I got the chance to interview up-and-coming singer-songwriter Sofia recently. If you don't know who she is, you're going to want to. Think kd lang meets John Mayer.

I will share the full interview next week, but I am very excited to share something exclusive with you first. Sofia is letting ButchOnTap and HuffPost launch the worldwide premiere of her new single and video, "Friendly Little Ghost." You can be the first to see it here!

This song is very important to Sofia because it came out of her battle with Crohn's disease. So here is a snippet from our interview, about Crohn's:

Please explain your struggles with Crohn's.

I was at Berklee and had to withdraw from the semester because I started getting fevers every day. I was hospitalized a bunch of times in a couple of months. Three blood clots were found in my spleen because my immune system was so compromised, so I had to inject myself with blood thinners for about three months. Things escalated so much that I started to bleed internally and had to have like seven bags of blood in a week. I went back to school the next semester and somehow managed to graduate on time. It meant so much to me to be there at Berklee. I had a scholarship and was so grateful to be there, so I kept going even though it got really tough sometimes.

It was after I got sick when I wrote "Mum I Like a Girl." I came in second in the "Songs for Social Change" competition, and it was the first time in my life I had ever won an award for a song I'd written. So in a sense it felt like I was overcoming my health battle with music.

I inject myself every two weeks with an immune suppressant called Humira. It saved my life. Crohn's can be a really scary process; it's almost like having cancer, but it's not cancer. They use similar terminology: "in remission," "no appetite," "nausea." And I have a high risk of cancer in the future. It's really a crazy disease to have. I try to speak to my best friend Avery, who struggles worse than me, every day, and her experiences really gives me a lot of strength. It is hard to want to do anything and stay positive, but we do because we know that there are kids as young as 8 who get this. That's why it's important that we make it more accessible to talk about stomach problems and make it more comfortable to talk about food issues, including irritable bowel diseases. We would help a lot of people to feel more comfortable with the fact that there is nothing wrong with you. You just have a disease!

It is very butch to take one's personal and painful struggles and turn them into art. Be butch.