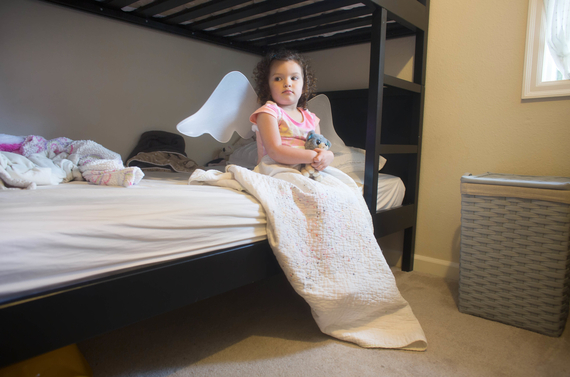 
Sleep researchers who attended the SLEEP 2015 conference in Seattle were fascinated to learn about new genetic targets for narcolepsy in mice, non-drug treatments for insomnia, and why recovering from a week of bad sleep isn't as simple as sleeping in on the weekend. I was fascinated, too. But as a parent, the most useful session I attended was tucked into in a much smaller room, labeled "Practical Strategies for Working with Parents to Manage Behavioral Sleep Problems in Children."

That's where pediatric psychologist Brett Kuhn, of the University of Nebraska Medical Center, was doing a training. Or, as I like to think of it, spilling his secrets. Here's one of them, for ages 3 and up:

Problem: My kid won't stay in bed long enough to relax. Or won't fall asleep without me.

Somewhere around age 3, my friends and I are finding, our good sleepers suddenly aren't. They want us in the room until they fall asleep. They want to climb into our beds in the middle of the night. (Actually, we find this sweet.) Or they refuse to even start the night in their beds. (Less sweet.) My kid stays in bed for a story but then immediately jumps out of bed with a sly smile. Thus begins a frustrating routine of coming out of her room a dozen times, instead of lying in bed and relaxing.

I'm attacking this problem from all sides: Talking about sleep as a good thing, making the bedroom darker (thicker curtains, no nightlight), and using connection to stop the power struggles. Adding Kuhn's strategy to the mix is working. Why?

Most sleep advice for kids revolves around the concept of "extinction": ignoring behavior you don't want. Whether it's extinction (Weissbluth), graduated extinction (Ferber), or graduated extinction with parental presence (everyone else), parents are often missing one key ingredient, Kuhn says. Extinction doesn't teach your child what she should be doing.

It's a concept I note in my book, Zero to Five: 70 Essential Parenting Tips Based on Science. It's not enough to discourage bad behavior. You also have to replace it by teaching the behavior you do want.

In this method, Kuhn combines extinction with skill-building through positive reinforcement. He calls this the "Excuse Me Drill."

1. Roll up your sleeves the first night: this will be a full-time job. Delay bedtime a little bit so your child is definitely sleepy.

2. Sit next to your child in bed and give lots of touch--massage, scratching his back, rubbing his earlobes. Say, "You're doing a great job staying in bed. Excuse me, but I need to go do something. I'll be right back." Leave and come back right away.

3. Resume the touch. Describe anything positive you see: "Wow, look at you. You're lying in bed. Your legs are relaxed. Excuse me, I'll be right back." Leave. "Bam, you're back in," Kuhn says. Repeat. This is called "thick schedule reinforcement." Using your presence, you're frequently reinforcing the behavior of staying in bed and relaxing.

4. If your child is doing well, start coming back in intermittently. The timing needs to be unpredictable. As any casino knows, unpredictability encourages a person to keep trying (staying in bed) for the reward (you). You might be doing this twenty or thirty times the first night.

5. Make sure you're not in the room at the moment your child falls asleep. Otherwise he's missing the whole point: initiating sleep on his own.

6. "Thin" the reinforcement schedule based on how well your child is doing. You might do this half as many times on the second night, for example. Keep thinning, night after night, until it's no longer needed at all.

So does the positive reinforcement have to be you? What about sticker charts and all that?

"For a young child, nothing is more reinforcing than the parent's presence, praise, and touch," Kuhn says. "They're not calling you into the room because they're devoid of stickers."

You're the primary reinforcer, in psychology parlance. So it's most effective to use yourself to reinforce what you want your kids to do.

What if you're at the end of your rope, you tried extinction out of desperation but it didn't work, and everyone is very anxious about sleep? Start smaller.

Spend more time in the room--maybe even staying until your child is asleep on the first night. Go more gradually in lengthening the time you spend out of the room. Maybe you're doing this over three weeks, Kuhn says, instead of a few days.

One key is to keep a sleep diary, so you can truly tell what's happening week by week. If you don't write it down, your brain will just remember the worst instances and the most recent instances.

When to call in a sleep specialist? If you want more support creating or sticking with your plan, figuring out what's happening, or making a medical diagnosis. Kuhn, for example, looks at the many possible layers underlying sleep problems, including what the room looks like, the child's sleep-wake cycle, and behavioral issues during the day.