It's an appealing fantasy: why not just suck all the pollution out of our planet's air? Plenty of people have air purifiers in their homes. Can't we just build bigger ones? There must be a way, right?

Well, not exactly, and not yet, but at least one company is developing giant fans that can pull carbon compounds from the air and compress the resulting CO2 for either underground sequestration or industrial reuse. Calgary-based Carbon Engineering's air capture technology tries to do what trees do effortlessly, but in this case it takes quite a bit of effort.

CE's chemical-based CO2 air capture system brings atmospheric air containing CO2 into contact with a strongly alkaline non-toxic potassium hydroxide solution that naturally absorbs CO2 in a device it calls a contactor. The CO2 is absorbed into that solution to produce a potassium carbonate rich in CO2. In a test of a prototype 12 feet tall and 40 feet long in 2011, the device captured two tons of CO2.

The potassium carbonate solution is sent into a regeneration cycle that simultaneously extracts the CO2 while regenerating the original chemical solution for reuse in the contactor. These two processes work together to enable continuous capture of CO2 from atmospheric air, with energy (and small amounts of chemicals) as an input and pure CO2 as an output. The future plan is either to sequester the CO2 underground or pressurize it and sell it for industrial reuse, such as in oil well optimization. 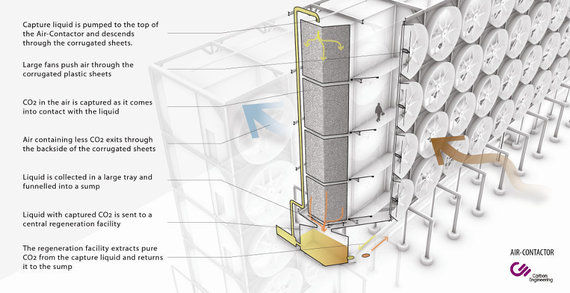 Now about that energy use...the system that separates the CO2 operates at about 900 degrees Celsius (or 1,652 degrees Fahrenheit), and it burns natural gas to achieve those temperatures. Doesn't that defeat the purpose of the whole thing? Not really, says the company. The CO2 created from burning the gas is also captured by the system, so it introduces no new CO2 to the atmosphere. In the long term, the company adds, it hopes to use carbon-free power. Carbon Engineering opened a pilot plant in Squamish, British Columbia earlier this month with an eye toward building a first-of-its-kind commercial capture plant in 2017.

In the meantime, why not turn smog into jewelry? That's the idea behind the Smog Free Tower, a project dreamed up by Daan Roosegaarde, a Dutch designer. His idea: to make smog tangible, and by doing so, to make us all more aware of threats to our environment. He built a 23-foot tall wind-powered air purifier that draws in the dirty air of Rotterdam (up to one million cubic feet every hour) and captures ultra-fine smog particles by sending a small positive current through an electrode to send positive ions into the air. The ions attach themselves to fine dust particles, and there you have it--smog in a box. 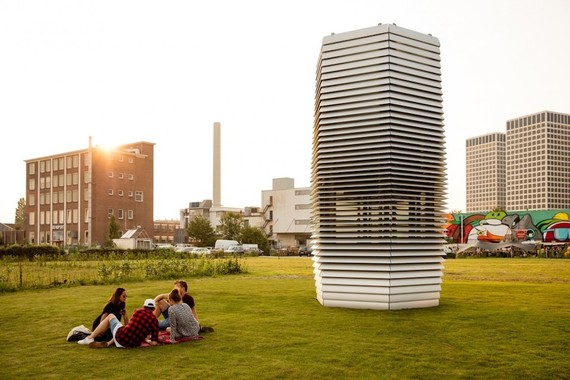 The next step is to compress that fine dust into small black cubes, each one representing the smog from 1,000 cubic meters of air. Think rings or cufflinks. In areas affected by severe air pollution, Roosegaarde says, the Smog Free Tower would be able to harvest enough smog to produce over 3,500 cubes per day. 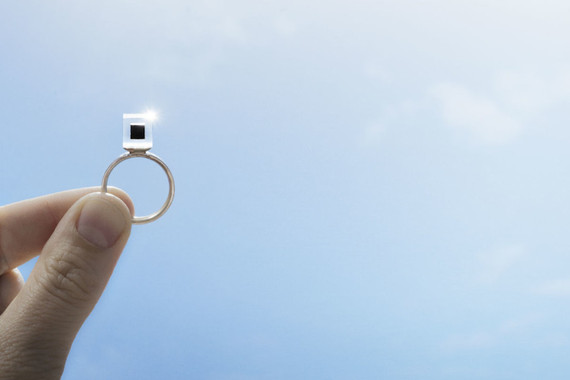 A Smog Free ring is created from the smog collected and compressed from 1,000 cubic feet of air. (Source: Studio Roosegaarde)

Roosegaarde next plans to take his tower on a world tour, and is considering cities like Beijing, Mexico City, Paris and Los Angeles as possible future locations for additional towers.

XPRIZE recently announced the $20M NRG COSIA Carbon XPRIZE, a global competition to develop breakthrough technologies that will convert CO2 emissions from power plants and industrial facilities into valuable products like building materials, alternative fuels and other items that we use every day. For more information on the prize or to register to compete, visit carbon.xprize.org.