As long as we've had society, we've had etiquette. There have always been "ways one should behave" in various situations, whether that is a meeting or a dinner party. Then... along came wearables, something that the etiquette books were not ready for.

In fact we have seen an etiquette journey commence, as we as humans learn the role our behaviors play when the arena is always switched on and connected. 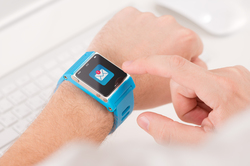 First, we saw it with phones. Phones used to be attached to a wall somewhere in the house. If someone called you, you would excuse yourself to take the call. As phones became a part of us, worn on our hips, or left in our pockets, the closer to the table the phone calls got, and the closer the notifications got.

It very slowly got more acceptable to have your phone with you. Clearly, there are times not to have your phone out: an important meeting, or a family dinner or the cinema for example. But look around and see how this once frowned-upon behavior has become more and more accepted. At a restaurant, how many phones do you actually see lying on the table along with the table salt? At a work meeting, how many people have their phones on the table next to their notepad or laptop?

Now, wearables have an advantage. They can be concealed as an item of clothing or an accessory. They can blend in with your bracelets or disguise themselves as a watch. Not quite so obvious as getting out your iPhone 6. Plus, in the middle of dinner and lighting up the room. However, think about the watch. Even with a traditional watch, there is still that etiquette that says that looking at your wrist while in conversation is a sign you are bored, or have somewhere better to be. Does this still stand?

To investigate how people behave with their wearables, I had lunch with several people who all sport the technology in the form of a health-related wristband or watch, so that I could observe their behavior.

With the wristband (a health-related wearable), nothing really lit up, apart from when a milestone was reached. When it did, they exclaimed: "Yay, I've reached my daily goal!" in which moment I shared their happiness and thought to myself, I wonder how much I moved around today.

Being that I tend to carry my phone around like an organ, I was shocked to find that the glancing at the watch did annoy me. It wasn't necessarily that I felt it was rude; it was more the discontinuity it led to in conversation. It was the constant interruptions. That compelling fact that since the notification was there, they had to look. That we could not sustain a conversation.

It wasn't even that I was annoyed with them as an individual, it was more this added layer of complexity that had been introduced to an already complex world. I had just gotten used to the phone being acceptable. But even then, you choose careful moments to check up on it. The notifications on their wrist created this push into what was before a carefully considered and etiquette-bound protocol for dealing with these types of affairs.

There is no question of the benefits that various wearable technology has provided the world, but, in the case of the "notification-heavy watch," did we really need a device for notifications, to field the notifications on another device?

The question remains: For the average person, what is a wearable's place in the world? Aside from focused applications such as fitness wearables, what will their application be for humanity? Will they ever replace the smartphone as some have predicted?