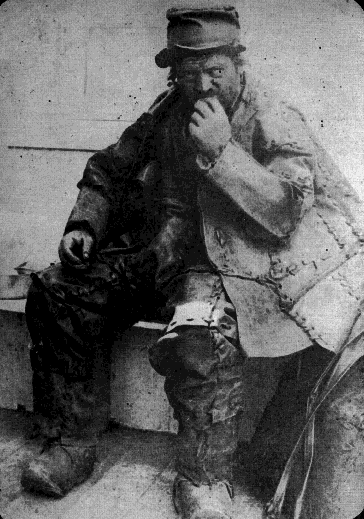 The Leather Man of the Hudson Valley


This spring, the Leather Man will be exhumed. This mysterious hermit who tramped from town to town just after the Civil War was called the Leather Man because he wore a suit of leather sewn together from scraps. For 25 years, he walked the same 365-mile route through the New York, New Jersey, and Connecticut countryside, avoiding large towns and main roads, and completing the same circuit every 34 days.

No one knows who he was because he never spoke, but the Leather Man always returned to the same farmhouses. His timing was so exact that housewives along the path had homemade bread, pies, and special meals waiting for him. Many believed he was deaf, and the Leather Man used his hands to gesture. He'd indicate "hunger," eat, and then disappear to one of his cave or rock shelter campsites only to continue his journey the next morning.

The Leather Man's hat, trousers, and coat were all made of leather. His leather clogs had wooden soles resembling those worn by French and Belgian peasants. The Leather Man's clothes weighed more than 60 pounds and looked like a leather patchwork quilt. The locals heard the leather creak as he walked by and many said they could smell him coming. The Leather Man picked up cigar butts on his path and accepted donations of tobacco or cigars from the townsfolk, but would not accept money. One farmer's wife left some brand new pennies for him, and the next morning, the new pennies were gone but had been replaced with old rusted ones.

The Leather Man's nationality is unknown. Some claim he was a Frenchman, and others said he was Dutch or French Canadian -- no one knows for sure. The only known facts are that he survived the blizzard of 1888, but a year later was found dead in his cave in Briarcliff, NY. His bag contained heavy leather equipment and small prayer book written in French. He was buried at the Sparta Cemetery in Ossining, New York.

More than one hundred years have passed, but the Leather Man continues to intrigue people. Says Norm MacDonald, president of the Ossining Historical Society, "Since the publication of the book The Old Leather Man by Dan Deluca, we have experienced increased numbers of visitors to the gravesite. Some sixteen thousand vehicles pass the grave each day and there have been several fatalities in the area in the past two years. We will relocate the grave to a more appropriate area in the cemetery with a proper memorial to mark the site."

At the same time, DNA testing will be conducted on the Leather Man's body. Nicholas F. Bellantoni, a Connecticut State Archaeologist will be overseeing the excavation of the Leather Man and will conduct appropriate scientific studies. Says Bellantoni, "I can assure you that one of the reasons I agreed to do this project was to be sure that Old Leathery was treated with the utmost respect and professionalism. I have been a big fan of his for over 30 years."

To those who claim that moving the body is disrespectful, Bellantoni explains that there are not only safety concerns with the present gravesite, but that the Leather Man lies in a pauper's grave with a re-used tombstone (someone else's name is engraved on the back) and with a false name on the front. "I find this disrespectful," says Bellantoni. "He deserves better - a reburial within the cemetery with an appropriate marker so future generations will be able to learn of his story." Bellantoni feels that while the scientific study will not solve the complete mystery of the Leather Man, they will gather enough information to tell his story in a unique way and eliminate some of the false information that has been a part of his legend. Says Bellantoni, "I can also assure you that if we take small samples for DNA, I will be sure that we take the absolute minimum necessary. While the Leather Man did not speak, he can still tell us his story through modern science."

I love the story of this mute hermit and am intrigued by the way he walked the exact same circuitous route for 25 years. I've hiked the Leather Man's Trail at Ward Pound Ridge Reservation in New York, visited his cave at the end of the trail, and looked at his photograph in the Reservation's Nature Museum. It doesn't bother me that they are exhuming his body, though I don't really care what they discover about who he was. What resonates with me is his independent spirit and how he was able to survive in the outdoors for three decades. No matter what the tests discover, to me, the Leather Man will remain a mysterious legend in the folklore of the Hudson Valley.