Exit polls for the 2014 midterms cast a spotlight on a pervasive sense of national discontent, offer some clues as to how the Republicans won so definitely, and provide a glimpse of the interminable 2016 battle to come. A few takeaways:

Americans remain deeply pessimistic, especially about the economy: Exit polls, which are conducted by Edison Research for the National Election Pool partnership of ABC, CBS, CNN, Fox, NBC and the Associated Press, ask a number of questions designed to measure the national mood. And Tuesday's results were almost unrelentingly glum, as they have been in polling throughout the year. Sixty-five percent of voters said the country is on the wrong track, 78 percent were at least somewhat worried about the direction of the economy, and 59 percent said they think the economy is either poor and not improving, or getting even worse. A new high of 48 percent said they think life will be worse for the next generation of Americans.

Only 20 percent of those polled trust the government to do the right thing most of the time, and majorities disapprove of President Barack Obama, the Democratic Party and the Republican Party. In a departure from past years, both parties were disliked about equally. Even in 2010, net opinion of the Democratic Party was 4 percentage points higher than that of the GOP; this year, the gap was just 1 point.

Democrats' base voters went missing, while independents trended right: In the week before the elections, Democrats' slim chances of victory banked on increased turnout among groups that don't traditionally vote in force during the midterms, including African-Americans, millennials and single women.

2014's electorate, however, ended up looking pretty close to the one that gave Republicans the win in 2010. Unmarried women, on whom some Democratic strategists were unrelentingly focused, made up 21 percent of the electorate, and favored Democrats by a 22-point margin. That, however, represented their narrowest margin for Democrats dating back to 1992 and wasn't enough to turn the tide. African-American voters made up 12 percent of the electorate, effectively the same as the 11 percent they composed in 2010.

Young voters, who rarely turn out in force for the midterms, made no exception this year, with voters under 30 clocking in at about 13 percent of the electorate, on par with 2010 and 2006. Although a Harvard Institute of Politics poll had predicted millennials would swing Republican, they didn't. However, millennials didn't vote as overwhelmingly Democratic as they did in 2012, leaning toward Democrats by just about an 11-point margin.

Here's a chart of the past three midterms for comparison, via Pew Research: 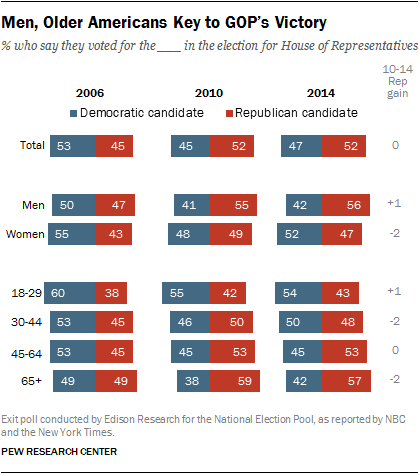 Political independents, meanwhile, were 12 points more likely to vote Republican than Democratic, lower than 2010 but among the best margins for the GOP in years.

Democrats' support for popular issues didn't help them win: Across the nation's battleground states, Democrats' legislative priorities significantly outpolled their candidates. Nationally, 57 percent of Americans favor a path to citizenship for undocumented immigrants, 53 broadly support legal abortion, and 58 percent said climate change is a serious problem. But a significant fraction of people holding those positions were still willing to vote for a GOP candidate. Thirty-four percent who support immigration reform, 33 percent who back abortion rights, and 29 percent who are worried about the environment voted Republican. Despite Democrats' emphasis on income inequality, a third of voters who said the economy favors the wealthy voted for the GOP.

On the state level, 57 percent in Georgia support raising the minimum wage, as do 59 percent in Iowa, 64 percent in North Carolina and 66 percent in Louisiana. Yet, U.S. Senate races in Georgia, Iowa and North Carolina were called for the Republican candidates Tuesday night. Louisiana's Senate race will go to a runoff, where the GOP candidate is thought to have an advantage. In Kentucky, where Sen. Mitch McConnell easily won re-election, 50 percent of voters said the state health exchange, Kynect, is working well, while just 37 percent said it is working poorly.

Voters' tendency to agree with a candidate's position but not cast a vote for the individual was especially visible in Colorado, where Sen. Mark Udall (D-Colo.) staked much of his re-election battle on casting his opponent, Republican Rep. Cory Gardner, as out of sync with voters on issues like abortion. He was in line with voters -- 61 percent in the state said abortion should be legal and 64 percent opposed a controversial amendment granting personhood to fetuses, according to exit polls. But many voters didn't find that to be enough reason to vote for the Democrat: A third who voted against the personhood amendment still voted for Gardner, as did 16 percent of the people who said abortion should be legal in all cases and 42 percent of those who said it should be legal in most cases.

Voters' feelings on the president and the state of the nation were more predictive. Three-quarters who said the country is on the wrong track voted for Gardner, as did 77 percent of those who felt negatively about the Obama administration and 82 percent who said Obamacare went too far.

Democratic Senate candidates had a tough time outperforming Obama's low approval rating: Exit polls nationally put Obama's approval at about 44 percent, but in many Senate swing states, it was lower, falling beneath 35 percent in Arkansas and Kentucky. In Colorado, Georgia, Louisiana and North Carolina, Obama's approval rating was closer to the national average, but Democratic candidates struggled to win over voters who didn't support him, receiving just 10 to 14 percent of the votes cast by people who disapproved of Obama. By contrast, in New Hampshire, where Democrats pulled out a rare victory, 43 percent approved of the president, and Sen. Jeanne Shaheen attracted the votes of 17 percent of those who disapproved of Obama.

Candidates weren't too popular in their home states, either. Just 34 percent in Kentucky thought Rand Paul would make a good president, and just 34 percent in Texas said the same of either Rick Perry or Sen. Ted Cruz (R). In Florida, 36 percent gave a thumbs-up to Sen. Marco Rubio (R) and 40 percent to Bush. In Wisconsin, the candidates were a little more popular but still lacked majority support, with 42 percent saying Gov. Scott Walker (R) would be good in the White House, and 46 percent saying Rep. Paul Ryan (R) would do well.