CHICAGO, Jan 27 (Reuters) - The number of U.S. criminals exonerated in 2014 climbed to a record high of 125, in part because of efforts by prosecutors willing to admit their offices made mistakes, according to a report released on Tuesday.

The states with the most exonerations last year were Texas, New York and Illinois, according to the National Registry of Exonerations, a project of the University of Michigan Law School. This was the first time the Registry, which has tracked exonerations since 1989, found more than 100 in a single year.

Evidence that frees a prisoner may include DNA linking another person to the crime and evidence of perjury. In one case, Ohio native Ricky Jackson spent 39 years in prison for murder - making him the longest-held U.S. prisoner to be exonerated. He was freed last November after the witness admitted he hadn't seen the crime.

Of the total known exonerations in 2014, more than half were obtained at the initiative or with the cooperation of law enforcement - the highest number in a single year, the report found. Most of these were the work of "conviction integrity units" set up by prosecutors to review questionable cases.

In one case, a Chicago judge dismissed charges against Alstory Simon after 15 years in prison for a double murder. Another man, Anthony Porter, had been convicted of the same crime in 1983, and sentenced to death but was released after Simon's confession. 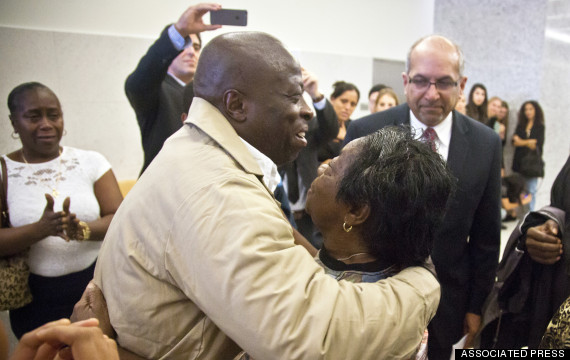 David McCallum embraces his mother Ernestine McCallum after his exoneration Wednesday Oct. 15, 2014 in New York. McCallum and Willie Stuckey, who died in prison, were 16 years old when they were convicted of murder. A judge exonerated both men for wrongful conviction. (AP Photo/Bebeto Matthews)

Upon reinvestigation, prosecutors found that Simon's confession had been coerced.

Michigan law professor Samuel Gross, author of the report, said he is seeing a change in attitude among prosecutors about wrongful convictions.

"I think prosecutors are much more willing to see identifying errors as a positive part of their job, rather than as a misfortune they have to endure," Gross said.

Lake County State's Attorney Michael Nerheim, whose office covers the northern suburbs of Chicago, started an independent panel made up of retired judges, defense and civil rights attorneys to review cases. He said prosecutors should be leading the charge against wrongful convictions.

"We're all on the same side - no prosecutor wants to wrongfully convict somebody," said Nerheim. "We all want the truth."

Another reason for the large number of 2014 exonerations involves 33 drug cases in the Houston area. Prosecutors found that crime lab analysis came up negative for illegal drugs after defendants had already taken plea deals. (Editing by Eric Walsh)