Kids, don't stick your gum on these desks.

ExoPC, the French-Canadian startup that manufactures a tabletop multitouch surface with a 32-inch LCD display called the EXOdesk, has signed a deal with the government of Panama to furnish a physics classroom with its advanced touchscreen desks. This gives us a glimpse at what a classroom of the future might be.

The pilot classroom, which was authorized and will be overseen by Panama's minister of science, technology and innovation, will feature 20 touchscreen EXOdesks for grade school students, a larger EXOdesk for the teacher, and at the front of the room, a huge interactive multitouch "blackboard." This is just a giant touchscreen surface hanging on the wall. All of the books, notebooks, writing utensils and other school supplies will be stored within the desk's memory and be accessible at home at any time via the cloud.

(That's right: School desks have computer memory now and are available in the cloud. Back when I was a schoolboy, in order to get to the cloud, we had to walk barefoot, in the snow, uphill, both ways.)

Anyway, the desk itself contains an Intel i5 processor and runs a version of Windows 7, with an HTML5 interface specifically designed by ExoPC to suit the curriculum of the physics classroom. All of the desks and the blackboard will be connected via Wi-Fi so that students and the teacher can wirelessly share work and collaborate with one another. This will make it especially easy for one student to help another with a tricky problem.

Here's a mockup of what the classroom should look like when it's ready. The first day of school is in three months, and if I were a student at this particular Panamanian public school, I'd be pretty darn excited for summer to be over. (Okay, maybe not, but this is still pretty cool.) 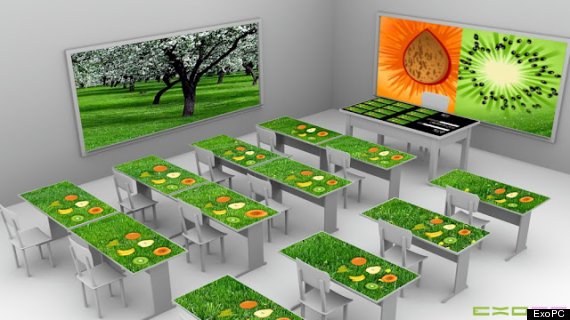 As you can see from the rendering, much of the EXO classroom is designed so that the students will always be able to look at the content intended for them: What appears on the blackboard also appears on every desk. You'd almost have to stare at the ceiling to miss the lesson.

Now, I know what you're thinking: These kids won't be paying attention to their physics teacher; with huge tablets in front of them, they'll all be surfing pornography and Reddit.

Not so! With their EXOdesks, students can not only access books and course materials but also their virtual notebooks, with an onscreen keyboard and "digital ink" for handwritten notes. And to cut down on, uh, extracurricular activity, the teacher can view from his or her EXOdesk everything happening at students' desks and also control what content appears before them.

That means, when the teacher says, "Class, open your books to page 131," he or she can manually open for them all students' books to page 131 and highlight where they should be looking -- with a couple of clicks.

(By the way, if you need a refresher about how the EXOdesk works, check out the video below, which we made at January's Consumer Electronics Show: Imagine the desk shown without the additional vertical computer monitor and you have a sense what the students in Panama will use.)

ExoPC CEO and founder Jean-Baptise Martinoli told me in an email that the students in Panama will also have physical copies of the books to use at home. Some students, he noted, don't have home Internet access. The goal of the pilot program, he emphasized, was to explore to what degree a basic course could be modeled and taught using almost nothing but tablets and software.

That vision is shared by several other major tech players seeking to digitally overhaul education. Apple recently held a rare event in New York City focused on reinventing the textbook for use on its iPads. For many years startups like Inkling and Kno have been attempting to modernize the textbook experience and transport it to tablets and laptops. And while ExoPC's classroom experiment will indeed digitize textbooks, it also does the same for the pedagogy and all lessons as well. Martinoli and ExoPC hope that this will also lead to higher engagement and a deeper immersion in the classroom subject.

Whether the "tablet everywhere" strategy envisioned by ExoPC and the Panamanian government accomplishes that will be determined by this very intriguing trial run.

And when might our own bright young lovelies gain a chance to start learning with tablet furniture? Martinoli told me that he is in active conversations with education boards in America and that an EXOdesk-filled classroom just might be soon on its way to the States. American educators that he has spoken with have indicated an interest in putting the desks in a half circle, rather than the traditional all-facing-forward arrangement, to broaden participation, Martinoli said.

Cross your fingers, kids. And save your gum wrappers.

Below, check out a few more views of the ExoPC classroom, which will be making its debut in Panama in August. Dig in and let us know what you think of the idea in comments: