A newly discovered alien planet is one of the most distant yet spotted.

Known formally as "OGLE-2014-BLG-0124Lb," the gas giant was detected by NASA's Spitzer Space Telescope and the OGLE Warsaw Telescope at the Las Campanas Observatory in Chile. It's about half as massive as Jupiter and is about 13,000 light-years from Earth.

"For context, most of the planets we do know about are a factor of 10-100 times closer than OGLE-2014-BLG-0124," Dr. Jennifer Yee, a NASA Sagan Fellow at the Harvard-Smithsonian Center for Astrophysics in Cambridge, Mass., and lead author of a paper describing the planet, told The Huffington Post in an email. 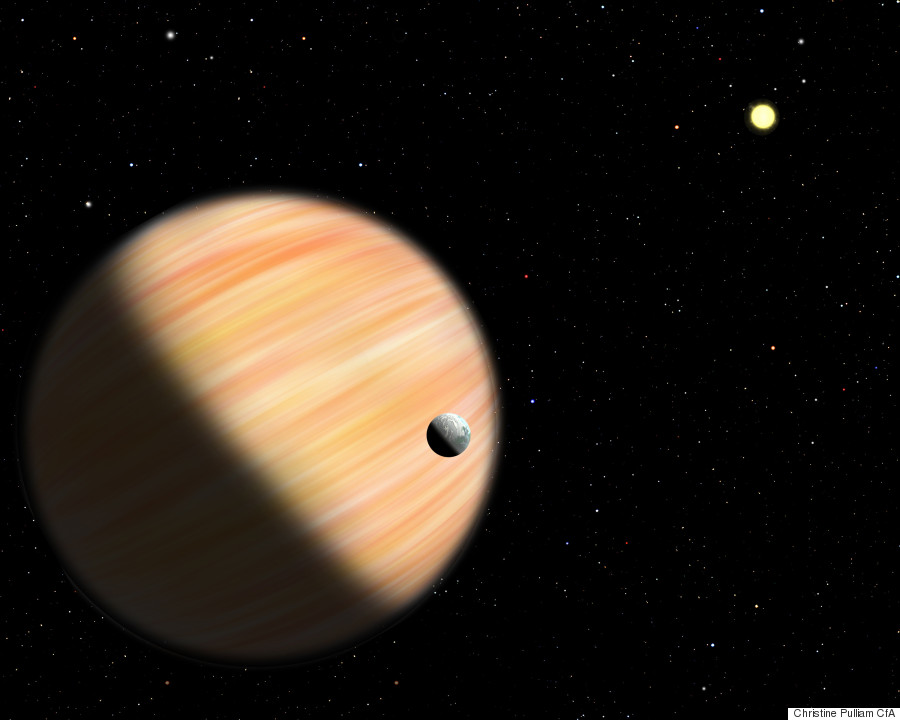 This artist's conception shows the newly discovered alien planet, which is about 13,000 light-years from Earth.

A distant world. Astronomers discovered the planet by exploiting a curious phenomenon known as "microlensing," in which gravity from one star shifts the light emitted by a more distant one -- like a sort of cosmic magnifying glass.

If a planet is orbiting the nearer star, it can cause a "blip" in the magnification. Astronomers can use these blips to characterize and mark the distance of planets tens of thousands of light-years away, just like OGLE-2014-BLG-0124Lb. 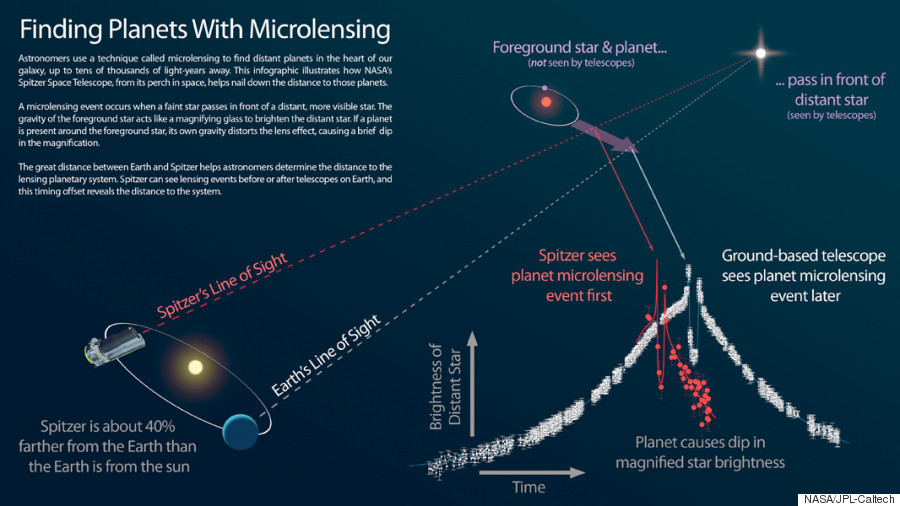 This infographic explains how NASA's Spitzer Space Telescope can be used in tandem with a ground-based telescope to measure the distances to planets using the "microlensing" technique. Click on image to enlarge.

"The OGLE-2014-BLG-0124L discovery is important because it is the first time Spitzer has been used to measure microlens parallax for a planet," Yee said in the email.

Far, far away. The microlensing technique has helped astronomers discover about 30 distant alien planets in our Milky Way's bulge, the galaxy's central area of mostly old stars, gas, and dust.

The farthest known exoplanet resides some 25,000 light years away in the bulge of our galaxy, Yee said in the email. The bulge is a very different environment from the Milky Way's disk, where our own solar system is located.

According to Yee, no exoplanets have been found outside of our galaxy, which spans about 100,000 light years. 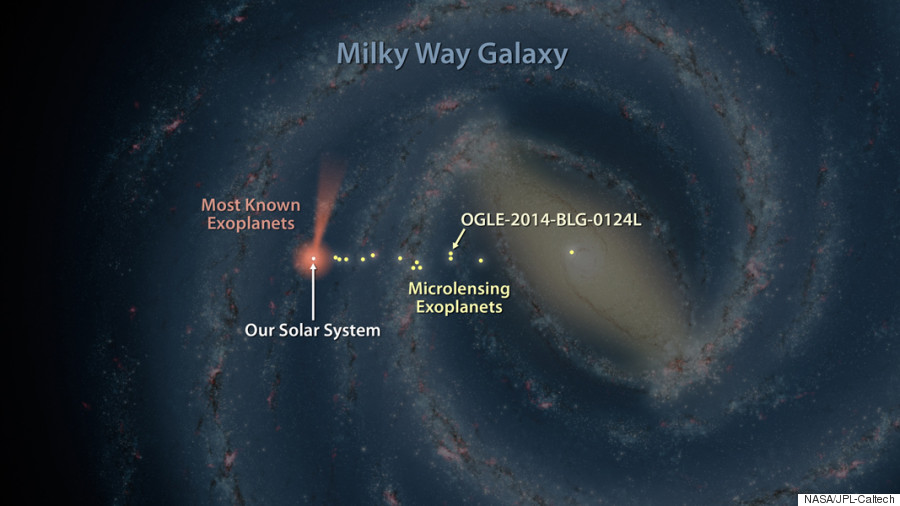 This artist's map of the Milky Way shows the location of some of the farthest known exoplanets, including OGLE-2014-BLG-0124Lb.

"We've mainly explored our own solar neighborhood so far," Dr. Sebastiano Calchi Novati, a visiting Sagan Fellow at NASA's Exoplanet Science Institute at Caltech in Pasadena, Calif., and a co-author of the paper describing the newfound exoplanet, said in a written statement. "Now we can use these single lenses to do statistics on planets as a whole and learn about their distribution in the galaxy."

Comparing planets to planets. Astronomers hope not only to gain a better understanding of the distribution of planets in the Milky Way, but also to gather enough detail about distant planets to compare them with those closer to Earth. More than 1,000 exoplanets closer to home have been discovered by the planet-hunting Kepler mission and ground-based observatories, Space.com reported.

"We would really like to know whether planets form in the central bulge of our galaxy the same way that they do here, near the sun, where the overwhelming majority of planets have been found," Dr. Andrew Gould, professor of math and physical sciences at Ohio State University, and a co-author of the paper describing the newfound exoplanet, told The Huffington Post.

The Christian Science Monitor reported that the Spitzer telescope is scheduled to observe about 120 more "microlensing" events this summer, which could lead to the discovery of even more distant exoplanets.

The paper describing the latest exoplanet finding was published in the February 2015 edition of The Astrophysical Journal.

Giant Exoplanet Discovered 13,000 Light-Years Away Is Among The Most Distant Ever Seen
Artists' Conceptions Of Extrasolar Planets