A few years ago, people were bemoaning the fact that Pluto had been demoted from its pedestal as the ninth bona fide planet in the Solar System to one of three dwarf planets. Letters were written to newspapers, and op-eds trumpeted the disastrous news.

With the proper planets of our solar system ending with Neptune, many of the older mnemonics for remembering their order had to be scuttled. My very educated mother just served us nine what?

But at the same time that astronomers stole back Pluto and regularized the Solar System, they delivered a bounty of new worlds to ponder. Thanks to arduous ground-based studies of nearby stars, and to the dazzling successes of NASA's Kepler mission, we now have a catalog of over 1,700 "new" planets orbiting hundreds of other stars. According to a recent announcement by NASA's Kepler scientists, 340 new planetary systems are now known, with over 850 planets between them; some such systems have up to six worlds orbiting their star! 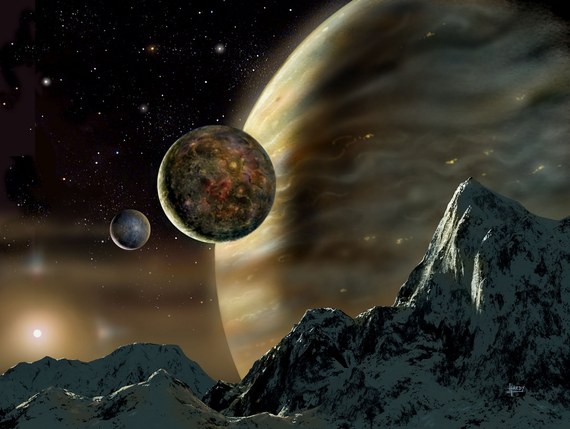 The reality of this new era has still not penetrated the public psyche, which is still mulling over the loss of one measly dwarf planet in the dim outskirts of our own solar system! But let's consider for a moment were the study of these distant "exoplanets" has now taken us.

In a single decade we have discovered that our solar system is not unique among the nearly 1 trillion stars in the Milky Way. Based on the Kepler survey, we have identified over 100 exoplanets that are Earth-sized, and of these, a handful are just the right distance from their star for liquid water to potentially exist on their surfaces!

Water is the staff of life. Without it you cannot even begin the chemistry of life. In November 2013 scientists announced that one fifth of all Sun-like stars in the Milky Way have an Earth-sized planet in the "water zone." With one fifth of the 1 trillion Milky Way stars being Sun-like, this works out to a whopping 40 billion Earth-like planets with liquid water potentially existing on their surfaces. That's a lot of opportunities for the chemistry of life to commence. On Earth this happened only a few hundred million years after the surface of Earth cooled enough for standing water to exist. Then bacteria emerged and dominated the planet for the next 4 billion years.

Through the efforts of ground-based telescopes and NASA's Hubble and Spitzer Space Telescopes, astronomers have been able to study the atmospheres of over 50 of these new worlds. Water, carbon dioxide, methane, sodium, and water vapor have all been detected in these planetary atmospheres, along with actual clouds in the atmospheres of planets such as GJ 436b and Kepler-7b.

Would you believe that there are planets so hot that they are evaporating right before our eyes (HD 209458b and HD 189733b)? One planet, OGLE-TR-56b, has an atmosphere hot enough to have clouds of iron gas and raindrops of liquid iron raining down on the planet's surface. For some of the more massive, Jupiter-sized planets, it could even rain diamonds! The star called 1SWASP J140747.93-394542.6 is orbited by an object that is circled by a ring system much larger than Saturn's rings. The mass of the enigmatic object is not known; it could be a brown dwarf or a low-mass star instead of a planet.

Because the exoplanet catalog includes nearly 1,000 other planets that transit their stars, we can eventually study their atmospheres too. The goal is to find an Earth-sized, water-supporting "Goldilocks planet" with an atmosphere showing trace amounts of oxygen. Earth's atmosphere is 22-percent oxygen because Earth has a biosphere created over the eons by bacteria and plant life. Because oxygen reacts quickly with other compounds and rocks to oxidize them, only a planet with an extensive biosphere can continuously regenerate such a massive amount of atmospheric oxygen.

If astronomers do detect an exoplanet with a significant oxygen atmosphere, that can only mean an alien biosphere has created it. Many of us feel that it is only a matter of time, perhaps a few decades, before enough planetary atmospheres will have been surveyed to find one with such life signs. When that day dawns, we will have written a new chapter in the search for life and be able to actually estimate how much life exists in the universe!

And to think that right now, today, we are on the threshold of such a discovery as the catalog of exoplanets fattens from hundreds to thousands, and hence to tens of thousands in the near future. We know that planetary systems are not rare in the Milky Way. We know that small planets like Earth handsomely outnumber the giant planets like Jupiter, and we know that planets do find themselves in the "water zone" from time to time. Statistically, over 40 billion of these Earth-like worlds may exist in the vastness of our Milky Way.

So far we have discovered some of these distant worlds through glitches in the movement of their parent stars, or the brief diminution of their star light, but we now have a tally of 17 exoplanets that have been directly imaged as faint dots of light near their parent stars. The closest of these orbits the star Fomalhaut, located 25 light years from Earth. Larger than Jupiter, and with a distance from Fomalhaut that is four times the distance between Neptune and our Sun, this planet takes over 1,500 years to complete one orbit.

So we are living in an enchanting time when we have broken out of our parochial Solar System chauvinism and now get to see the bigger and richer picture of innumerable planetary systems strewn throughout our galaxy, and the bountiful opportunities for life that may very well exist there.

Once again, our enjoyment of the night sky has taken yet another quantum leap!