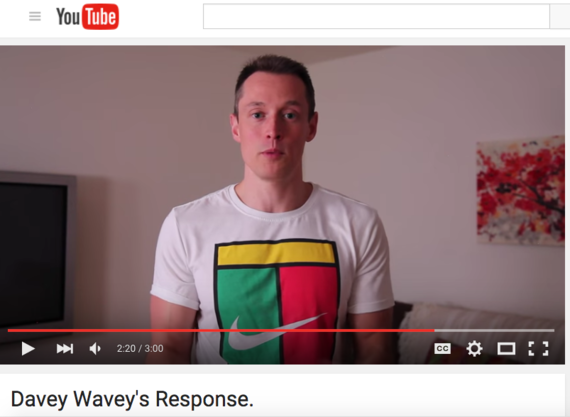 "...I can only do those videos that don't perform as well by also creating the content featuring the shirtless white gay men that does. So it's kind of like a catch-22."

Quick recap: In January, Gay Internet Icon Davey Wavey (That's the title he uses; who am I to judge... again?) posted a 1:21 video rant called "SHOW SOME F*CKING RESPECT!" that was impossible to ignore. Because it showed up on every LGBTI website and each site's respective social media outlets... over and over and over again. "YOU HAVE TO WATCH THIS," the headlines read. I followed orders. I thought, "hmm. I've seen this guy before." Long story short, I was impressed, but it wasn't the impression everyone else had.

Of all the stories I've written here, from celebrity interviews to provocative essays on Lyme disease, this response triggered the greatest reaction. I have a lot of mixed feelings about that; in my mind, I've written far more consequential content. So from the top I will concede that Mr. Wavey's massive following, based -- even he just admitted this -- he show still feels like a reduction of queerness in a museum of art dedicated to just that. The show feels more like a local history museum of a generalized sexual experience than an historical survey of how queerness blossomed in art --primarily upon his regular supply of semi-nude videos, has the kind of reach and influence and personal investment from gay men that can't be competed with except by another assembly-line face and body on display. I don't like this reality, but I can't deny it, either. 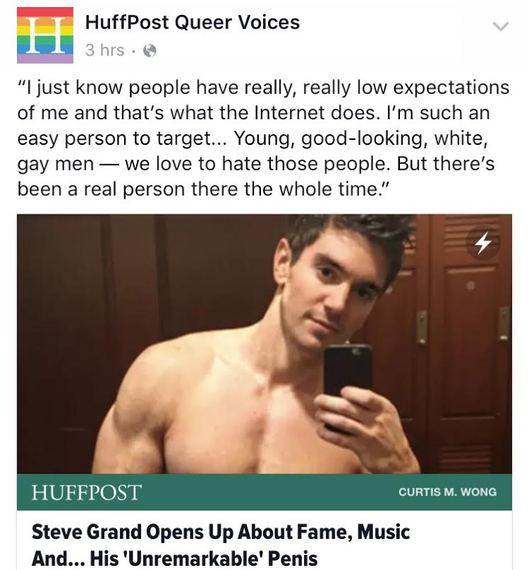 Today, a country singer-slash-underwear model I've never heard of called Steve Grand lamented that he is "such an easy person to target... young, good-looking, white gay men -- we love to hate those people." I'm not going to write a vitriolic open letter to Grand, but I will say this: People hate you for reasons other than what you think. To clarify a bit: It's because of self-pride and immodesty. Your outward appearance may attract a lot of people who fuel these qualities, but people only invest enough energy to hate someone when that someone works hard to attract hatred. I'm not saying I hate Grand; I honestly have never heard of him before. I am saying, as I've said before, that I'm really sick of self-celebratory conformist gaybots.

Davey Wavey's video response to my article will help to illustrate why. (Note that since this video, which promises to be more conscientious, follow-up videos include "Is Bisexuality Real?" and "Sending My Used Underwear to My Boyfriend!" Note also: I can't believe I'm writing about this again.)

Wavey: "There are a ton of reasons to come at me, but a lack of diversity is not one of those reasons." He has in the past posted a video about racism on Grindr, etc., he says. And so there you have it: quota fulfilled.

Here, I'll make a couple of points: First, I never intended to imply that Wavey, personally, is racist, even by exclusion. Nor did I mean to pressure him into taking an actual inventory of the non-white, non-young, non-gymnast-type, non-gay individuals with which he has associated in the past year. Honestly, that anyone would enumerate every such encounter is the most troubling part of all of this to me.

My intention was not to take aim at this one individual -- he just provided all of the specific examples that perfectly illustrated my observations (add now to this elite group the young, good-looking, white Steve Grand) -- but rather to address the culture of how gay men are depicted in queer media, and how gay men view, assign value to, and address one another. So when I observed that all I saw in Wavey's videos were one narrowly focused type of young, white gay man, what I probably should have clarified was that *this is what we see represented and valued throughout gay male community.* Never, ever did I mean to suggest that Wavey is a big fat racist because he doesn't conscientiously tick off every letter of the LGBTQIA+ community and systematically feature a person of a different ethnic group in every single video. That sort of intentional "diversity" is the approach businesses take, sourcing a single token representative of specific ethnic groups. Whether or not Wavey adds affirmative action to his business model frankly doesn't matter to me. On the surface level, seeing greater diversity on camera would be an improvement. But if that means seeing a greater diversity of people measuring their junk with a 30-something white man... that's not what I meant to encourage.

I've reached my word limit, and I need a break from this, anyway. So in the next installment, I'll do my best to explain what I did mean to encourage.